Brett Kavanaugh's confirmation: The patriarchy strikes back at #MeToo 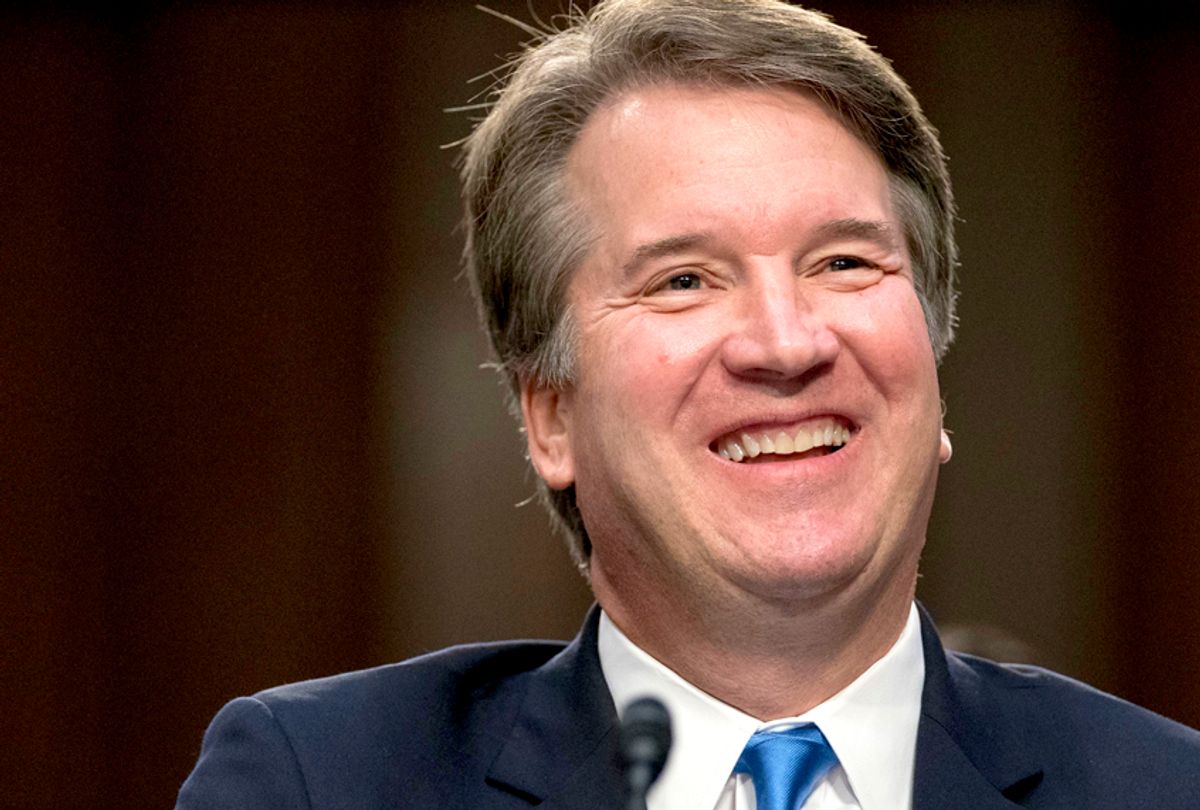 When Sen. Susan Collins, a Maine Republican, made the dramatic announcement on Friday afternoon that she would vote in favor of Brett Kavanaugh’s confirmation to the Supreme Court, she took pains to paint herself first as supportive of Christine Blasey Ford, the professor who testified to the Senate that Kavanaugh sexually assaulted her in high school (an allegation the judge denied under oath), and of the #MeToo movement in general.

“The Me Too movement is real. It matters. It is needed, and it is long overdue,” Collins said.

Then the senator proceeded to give all those who have fretted over whether this real, needed, long overdue movement has gone “too far” what they wanted to hear — that the roiling revolution of the last year can be stopped in its tracks to favor the status quo, in which even a credible accusation of sexual assault isn’t enough to keep a powerful guy from getting the job he and his supporters believe he deserves.

“I found [Blasey Ford’s] testimony to be sincere, painful and compelling. I believe that she is a survivor of a sexual assault and that this trauma has upended her life,” said Collins. “Nevertheless, the four witnesses she named could not corroborate any of the events.”

Her decision to vote yes made today’s confirmation vote -- by a count of 50-48, with Sen. Lisa Murkowski of Alaska voting "present" to cover for fellow Republican Sen. Steve Daines' absence -- pretty much a done deal. Kavanaugh's term on the Supreme Court could prove disastrous on many levels. As the ACLU pointed out in its report on Kavanaugh’s civil liberties record — before the organization broke its own policy of not weighing in on judicial nominees to oppose Kavanaugh’s confirmation — he’s not a big fan of privacy, on issues ranging from the NSA’s broad surveillance of phone records to random drug testing and stop-and-frisk.

Kavanaugh’s confirmation is also widely seen as a win for Donald Trump, who doesn’t actually care about abortion, surveillance or any of that boring judicial stuff, but definitely cares about covering his own ass in the ongoing investigations into his election and finances. As Adam Gopnik pointed out in the New Yorker, “Kavanaugh’s convenient late-arriving conviction that presidents should be protected from investigation — late arriving since he evidently felt very differently when he was pursuing Bill Clinton — is catnip to Trump.”

And of course — and this was the reason why so many women opposed Kavanaugh's nomination even before Christine Blasey Ford’s testimony — he’s a legitimate threat to women’s reproductive freedom, as the potential fifth vote to overturn Roe v. Wade.

Kavanaugh’s confirmation is a real victory for institutional misogyny; as my colleague Amanda Marcotte wrote on Friday, it’s hard proof that Republicans really do hate women. But its symbolic importance will transcend party lines.

In some ways, Kavanaugh’s confirmation represents the fruits of the backlash against #MeToo that its detractors, both vocal and silent, have been pushing for almost since the first New Yorker and New York Times reports on rape allegations against Harvey Weinstein were published — after which women started speaking out right and left about their own abuse, and past actions looked like they would finally have consequences.

In November 2017, I wrote about the cocktail of faux paranoia and spite that bubbled up in response to women asserting their right to occupy space on this planet without being sexually abused or harassed:

[S]ome men want an authoritative articulation of the rules stated for the record now, while we are still processing and reporting on the structures that have kept abusers in power for so long, so they can start looking for new loopholes immediately. Then, in the next moment of cultural shift, they will have fresh ammunition to throw back in our faces when we push back against whatever the next vanguard of creepery turns out to be.

Behold, men and those who are invested in keeping them in power at whatever cost: You have received such an articulated rule from Susan Collins, and it has been co-signed by a majority of the U.S. Senate.

"This is not a criminal trial and I do not believe that claims such as these need to be proved beyond a reasonable doubt," Collins said. But, she added, said, such claims "should meet a threshold of more likely than not."

"[Ford’s] allegations fail to meet the more-likely-than-not standard," she said.

There you have it: Christine Blasey Ford can be a survivor of a sexual assault that has upended her life and yet, at the same time, her insistence that she remembers who assaulted her, and who stayed in the room and laughed as it happened — "indelible in the hippocampus" — can be deemed "not likely" by those who wish away this inconvenient testimony. Debbie Ramirez's claim that Brett Kavanaugh caused her to make contact with his genitals in order to move them away from her face can likewise be dismissed as failing the vague mandate "to meet a threshold of more likely than not."

This is how a man like Brett Kavanaugh gets to ascend the next elite rung on his predestined ladder of success, rather than simply stalling out at the humiliatingly low level of federal judge. His victory a win primarily for anti-choice Republicans that has the side benefit of soothing men and women who are unnerved by the speed and strength with which traditional power structures have been threatened over the last year. At any point, Republicans could have withdrawn their support of Kavanaugh and forced Trump to go back to his list and pull a more dignified anti-choice judge's name, one with less baggage and a cooler demeanor under pressure. But doubling down on Kavanaugh sent a message — deliberate or not — that many were eager to receive. Finally, the Senate has ruled: We can stop talking about "consent"!

Kavanaugh makes a handy avatar for #MeToo backlash because a Supreme Court Justice is both the pinnacle of a law career and a lifetime appointment. People disgusted by Louis C.K.'s admitted sexual harassment, by Bill Cosby's rapes, by Matt Lauer's office dungeon button, by Charlie Rose's bathrobe — they have options. They can tell advertisers, networks, publications and studios that they will not be willing consumers of abusive men's careers anymore. Money talks. Voters can signal or decide by ballot that Roy Moore will not become a senator, Blake Fahrenthold should not remain in Congress, and Eric Schneiderman does not deserve to be New York's attorney general anymore.

A Supreme Court justice is a different matter. Anita Hill and her testimony against Clarence Thomas is now accepted as overwhelmingly credible, yet Thomas remains on the bench, sitting proof that power, once attained, can be retained and even seen as a right. This is reassuring to so many men and those invested in their power, even at much lower levels. Hey, if a guy like Brett Kavanaugh can be named to the Supreme Court over the testimony of a woman like Christine Blasey Ford, surely hitting on interns isn't an automatic disqualification for that director of marketing promotion, right?

When #MeToo detractors decry women's ability to "ruin a man's life" by speaking the truth about what he has done, they don't really mean losing out on a specific job, which is not in and of itself a life-ruining event. After all, Charlie Rose could simply retire in the un-Hamptons and play tennis all day and say to hell with a network show, and yet the waters for a comeback have been tested. Louis C.K. could film his stand-up routines and sell them directly on the site he has already set up for that purpose instead of worming his way back into the comedy scene. But at this point he'd be courting an incel/MRA audience for his downloads instead of Emmy voters, and he's not going to see that as an equal trade.

What they fear — and rage against — is the loss of status. Now that the behavior of men can color their reputations sufficiently to affect their careers, or the prospects of their ascension, it's not surprising that's seen as a kind of apocalypse. They're being treated like women, for god's sake, and I think we can all agree that's unacceptable!

Kavanaugh's confirmation will do many things in the long run. Along the way, it reassures men and those invested in their power that their status is secure. Status confers power, regardless of one's fitness to wield it. Who are women to demand men like Brett Kavanaugh give theirs up? More likely than not we're going to find out.