Won’t someone please think of the men?!

A backlash against abusive men in the workplace is in full swing, and men, the poor things, can't handle it 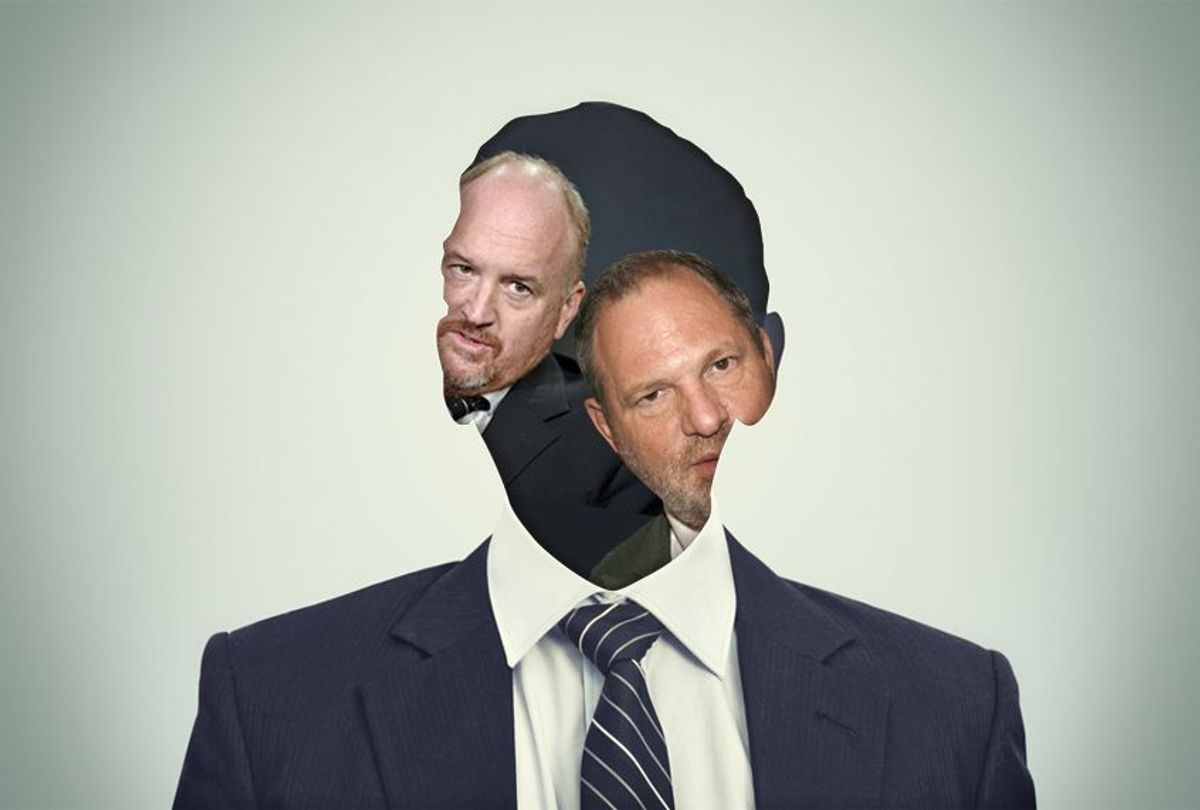 In the wake of the recent tidal wave of public allegations against Hollywood and media figures — a deluge unleashed initially by meticulous reporting by Jodi Kantor and Megan Twohey for The New York Times and Ronan Farrow for The New Yorker on the decades of abuse allegations made by what are now dozens of women against movie mogul Harvey Weinstein — men are looking over their shoulders. They feel the ground shifting under their feet. If untouchable comedy hero Louis C.K. can lose his career in two days, what could happen to poor anonymous me? they are asking.

To them I say, I don’t know, what do you think should happen? What reckoning do you, confused and frightened men of the world, personally fear, and why?

Consider the plight of this Denver-based cannabis dispensary platform entrepreneur, who told a New York Times reporter in a feature on male workplace anxiety that he’s “decided to be more careful about corporate offsites after seeing the swell of #MeToo claims.”

He added that harassment was not something he had thought much about before, but that he was considering his own behavior more. “Like, did I ever do anything?” he said.

Every girl and woman over the age of six is playing the world’s tiniest violin for men who have managed to stumble through their lives, achieving success and wielding authority over other people, and yet are only now getting around to wondering, like, did I ever do anything? As if that's not one of the first self-interrogations girls are taught to employ without mercy and the hardest to ever answer in the negative, a reality which men have exploited since the beginning of time? Did I smile too much? Did I not smile enough? Welcome to our world, men.

Men who haven’t leered, creeped, groped, raped, and/or otherwise used their position of professional authority and access as a sexualized and gendered weapon against the women — and men, too — in their professional sphere can dial down the drama and stop acting like the Misandry Police are going to come for them at any moment. Keep being decent people; maybe be more vocal about your expectations for men and your support of those who have been abused and harassed while their grievances are being taken seriously for once. You'll be fine.

Don't be the guy who decides to roll out a tantrum of pseudo-intellectual thought exercises instead. This kind of man is canceling the office holiday party rather than trying to uphold a standard of collegial behavior; he is slamming the door of his Mike Pence Professional Man-Cave in our faces — out of self-preservation, he tells himself, but maybe it's also out of spite. In the Times story, sexual harassment expert and lawyer Jonathan Segal’s patience with disingenuous “where do we draw the line?” bewilderment appears to be wearing thin already.

At a fund-raiser last month in Palm Beach, Fla., some men asked him if it was permissible to hug a woman and where the boundaries should be drawn.

Mr. Segal said he had explained to the men that the context mattered and that pretending there was a gray zone between collegial friendliness and sexual assault was absurd. For instance, he told them, hugging an old friend is very different from going up behind a co-worker while she was at a desk typing.

“If someone can’t understand that, then maybe they just shouldn’t be hugging,” he said.

If it sounds exhausting to be Mr. Segal right now, imagine sharing an office with the kind of man who is dominating every conversation about sexual harassment with dystopian workplace hypotheticals in which it will be forbidden to hold confidential meetings or his erection against a subordinate’s leg. Who’s to say what’s the difference anymore, aren’t we innocent until proven guilty, something something America?!

How do humans this dumb manage to get two matching shoes on in the morning, much less run so many industries? The answer, of course, is not that men have no way of knowing the difference between being friendly and being an abusive slimeball or worse. Of course they do. But some men want an authoritative articulation of the rules stated for the record now, while we are still processing and reporting on the structures that have kept abusers in power for so long, so they can start looking for new loopholes immediately. Then, in the next moment of cultural shift, they will have fresh ammunition to throw back in our faces when we push back against whatever the next vanguard of creepery turns out to be. No fair, you never said THAT was out-of-bounds!

“So how does this end?” frets Daily Beast columnist Matt Lewis in a column that ends by suggesting that women also bear responsibility for eradicating the misogyny that underwrites all of these tensions, controversies, scandals, crimes. In Lewis' view, a positive outcome of #MeToo is a future in which “men and women go on to treat each other as equals,” as if women not treating men as equals has been part of the problem.

In this scenario, women feel safe and secure in the workplace, and lecherous cads who cross the clearly-defined lines are not tolerated.

But there is another version where every man feels guilty, even if enforcement is selective. In this version, you’re always waiting for another shoe to drop—always wondering if that time you rubbed someone’s shoulders in 1998 will come back to haunt you.

In record time, men have made this moment about their own feelings, and what women have or haven't done to unsettle them and dredge up their feelings of like, did I ever do anything? Meanwhile, women still have to ask themselves things like: Did I smile back when he made a joke about not wanting to get "Weinsteined"? Wait, did I smile too much?

Lewis offers a haunting vision of the political wasteland of what’s to come if we don’t get to work soothing men so their "perceived victimhood" doesn't swallow us all whole:

One of the trends we have seen in the Trump era is the perceived victimhood of men, which has led to their effectively checking out of work and relationships. This might sound ridiculous when it has clearly been women who were clearly victimized in these instances, but it’s hard to argue with the trend.

It’s in everyone’s best interest to address this problem and live (and work) in harmony. This means we must foster an environment where everyone feels free to discuss these issues without fear of being attacked. This will also require new leaders to emerge and help facilitate this healthy dialogue. We have enough divisions in America already. The last thing we need is a battle of the sexes.

Lewis doesn't go so far as to suggest the "new leaders [who will] emerge and help facilitate this healthy dialogue" should necessarily be women. Sorry, ladies — the last thing America needs now is a battle for gender justice. Don't want four more years of pussy-grabbing backlash? Now is not the time to roll your eyes when men in your industry admit to not understanding the difference between being a friendly colleague and being sexist or sexually inappropriate. Men who are targeted sexually by men who also wield more power? Same goes for you.

Ask yourself instead: What can you do to make the men in your life more comfortable when openly discussing your oppression? The men, they are so confused and so fragile. They are wandering through the wilderness of office happy hours and they don't know what to do with their hands. Something has cracked open inside of them, something that threatens to destroy us all, and only we can guide them — while allowing them to pretend like they were leading all along, as is their earned right — back to the light.