Susan Collins delivers Brett Kavanaugh the vote he needs for confirmation. Did she dismiss Dr. Ford? 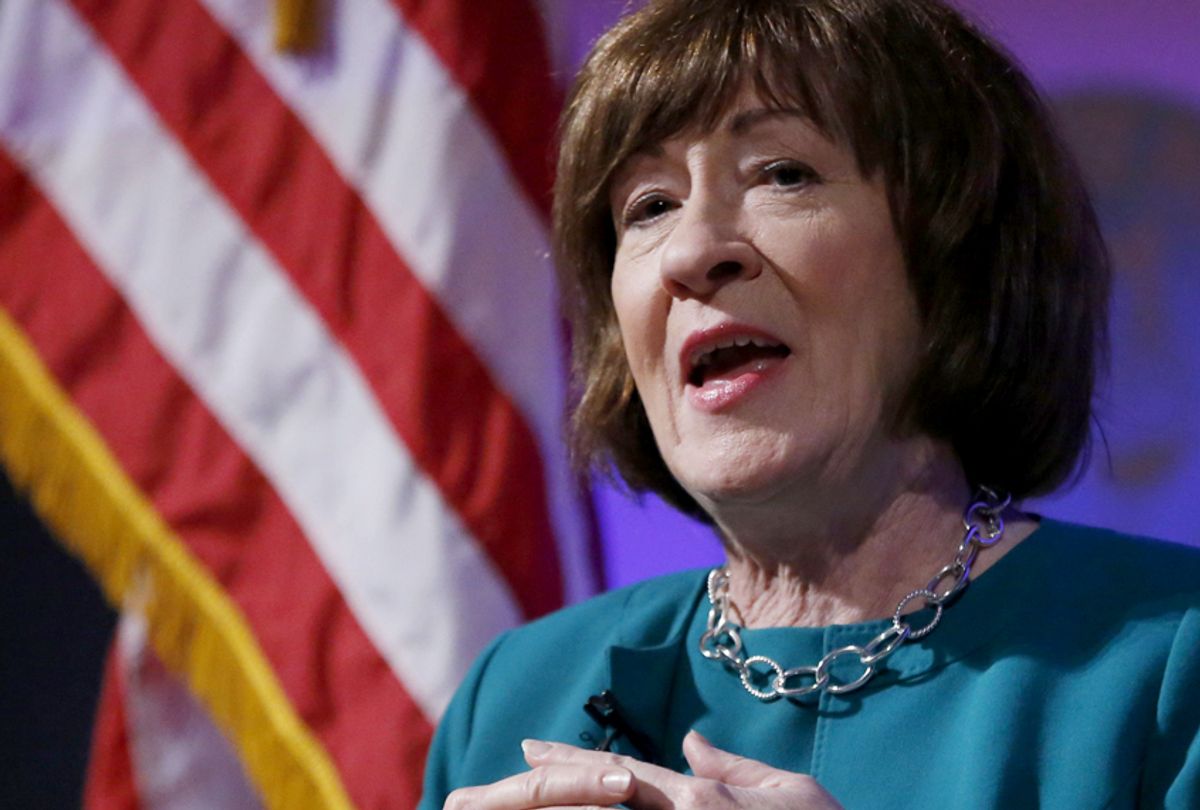 After weeks of anticipation and an over 50-minute speech on the Senate floor, Republican Sen. Susan Collins of Maine finally said she will vote to confirm Judge Brett M. Kavanaugh to the Supreme Court, giving Presidential Donald Trump's embattled nominee the pivotal vote he needs for final confirmation as early as Saturday.

"Mr. President, I will vote to confirm Judge Kavanaugh," Collins finally announced after a long speech full of tortured logic.

The lawmaker from Maine, who is one of two supposedly moderate Republicans in the narrowly-divided U.S. Senate, announced her decision while speaking on the Senate floor midday Friday.

Shortly following Collin's speech, West Virginia Democratic Sen. Joe Manchin announced that he planned to give Kavanaugh the thinnest veneer of bipartisan support. Now with a 51-49 majority in the Senate, Republicans have enough votes to confirm Kavanaugh to the Supreme Court.

The Senator from Maine said she reviewed Kavanaugh's long record of public service as well as allegations of sexual misconduct raised against him by university professor Dr. Christine Blasey Ford to make her decision.

Similar to Rachel Mitchell, the outside litigator who was hired by Republicans on the Senate Judiciary Committee to question Ford at last week's hearing, Collins seemed to focus less on Ford's allegation than on small details — that Ford does not remember who drove her home from the party where the assault allegedly occurred and that not a single person has come forward to say that they were the ones who drove her home that night.

"I found [Ford's] testimony to be sincere, painful and compelling. I believe that she is a survivor of a sexual assault and that this trauma has upended her life. Nevertheless, the four witnesses she named could not corroborate any of the events," Collins said.

While much is at stake if Kavanaugh is confirmed when it comes to the rights of women, people of color, immigrants, workers and protections for Native communities across the country, for Collins, her vote of yes could also be a determining factor in her reelection.

Last month, a group of liberal activists in Maine launched a unique crowdfunding campaign in an effort to beg the Maine senator to vote against Kavanaugh. The fundraising effort, which was started by Maine People's Alliance and Mainers for Accountable Leadership on the platform Crowdpac, raises money in the form of pledges: If Collins votes to confirm Kavanaugh, money will be withdrawn from donors to fund whoever decides to challenge her in 2020. If she votes no, donors will not be charged.

The groups had raised nearly $2 million from 69,000 pledges — a significant sum for a political race in a small state. As the campaign went viral, Collins' team accused her constituents and people who voted for her re-election to the U.S. Senate in 2014 of bribery.

Sens. Jeff Flake of Arizona and Lisa Murkowski of Alaska are the only Republican senators who have not indicated how they will vote on Kavanaugh's confirmation.

Flake, who reached across the aisle to delay a floor vote for one week while the FBI pursued an investigation into Ford's claims, has said he plans to vote "yes" for Kavanaugh, barring any last-minute changes. "I don't see what would," he told NBC News' Alex Moe. "But, anyway, I’m glad we had a better process. We needed a better process."

"We've seen no additional corroborating information," Flake said Thursday, foreshadowing that he would ultimately vote along party lines. However, at least one senator, Sen. Kirsten Gillibrand, D-N.Y., has publicly disputed that claim.

Earlier on Friday, Murkowski was the sole Republican who voted against Kavanaugh's nomination in the cloture vote. According to NBC News, she called the move "a mistake" and said "we'll see what happens tomorrow."

"I did not come to a decision on this until walking into the floor this morning," Murkowski told NBC News' Frank Thorp. "I have been wrestling with whether or not this was about the qualifications of a good man, or is this bigger than the nominee? And I believe we are dealing with issues right now that are bigger than a nominee."

"I made—took the very very difficult vote that I did. I believe that Brett Kavanaugh is a good man," Murkowski added. "I believe that he is a good man. It just may be that in my view he's not the right man for the court at this time."

Sen. Joe Manchin of West Virginia, a Democrat running for reelection in a state easily carried by President Donald Trump in 2016, was the sole member of his party to join Republican senators to advance Kavanaugh's nomination.

Democratic Sen. Heidi Heitkamp of North Dakota, who finds herself in a similar position as Manchin heading into midterms, voted against Kavanaugh's nomination. Heitkamp said her decision to oppose Kavanaugh was not political one.

"Our actions right now are a poignant signal to young girls and women across our country," Heitkamp added. "I will continue to stand up for them."