Sarah Silverman still loves you, America: "This is a show about trying to be open" 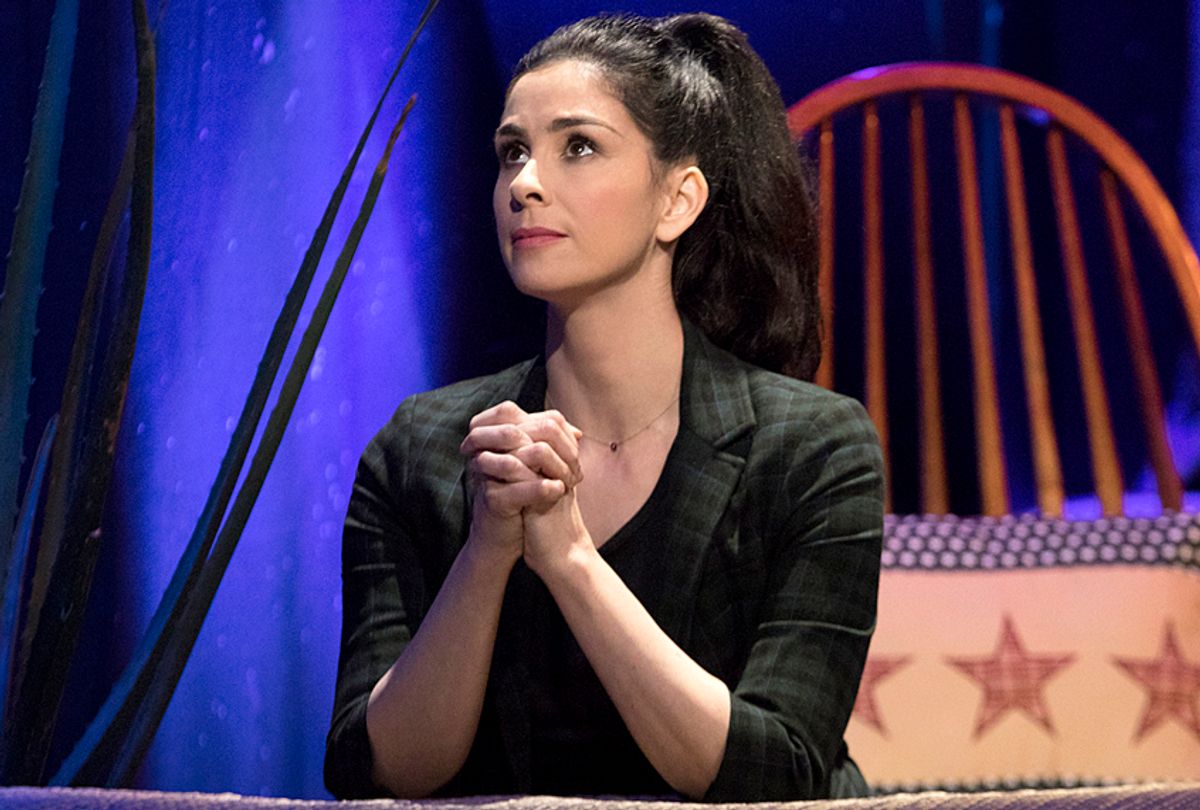 "I Love You, America with Sarah Silverman" (Erin Simkin/Hulu)
--

Sarah Silverman is not her usual ebullient self during our recent phone conversation. Completely expected, given that our chat takes place on a Thursday during a sliver of a break in her production schedule for her weekly Hulu series “I Love You, America with Sarah Silverman.”

But in addition to the usual day-of-debut stressors, this particular Thursday happens to be October 4 — judgment day, for all intents and purposes, in the vitriolic Supreme Court confirmation process surrounding Brett Kavanaugh. Despite the Judiciary Committee agreeing to a “limited” FBI investigation that turned out to be largely for show, the positions of key Democratic and Republican senators are already clear by the time we speak.

In response to the question of how she’s feeling, Silverman answered, “I'm trembling with rage. I don't know what else to say. I'm a little discouraged and heartbroken.”

Who isn't these days?

“But,” she adds, her voice clinging to the slightest note of optimism, “this is part of a big moment in history and I'm hoping the pendulum swings the other way, you know? Hard.”

The tension of our times demands to be addressed, however. As such, recent episodes have made the title of “I Love You, America” feel like less of a spirited declaration of unconditional affection than a plea to do better.

Silverman has been a force in the comedy world for more than 25 years, initially making a name for herself by slinging a take-no-prisoners brand of shocking humor. But in recent years, and certainly on this show, Silverman's modus operandi has been to start from a place of feeling, with the agreement that everyone has a right to their point of view. That's difficult territory to defend in 2018, but Silverman is insistent. Her new cold open segments, branded as “Sarah’s Quickie,” endeavor to maintain her bright outlook despite the encroaching darkness inflicted on us by divisive politics in Washington.

But as the weeks have worn on and our collective outrage elevated, Silverman's cheerful demeanor has, understandably, diminished. Her take dated October 3 is about as dark as it gets, showing the rally in which Donald Trump mocked Dr. Christine Blasey Ford. She then dismisses Trump, writing him off as a “void,” addressing senators directly instead.

“This is no longer a job interview,” she says. “This is a line in the sand, and you have to pick a side. And the side is no longer Republican or Democrat. Your vote is a statement. And that statement is either, ‘Hell no, this is not OK, this is not who we are.’ Or it’s telling every woman, every girl, every boy, every person, that what happens to women’s bodies does not matter.”

Her delivery is even, serious, passionate but containing a quiet, justifiable rage, even as she asks senators to be brave.

“Alright, I gotta go. Sorry this wasn’t funny,” she says, making her exit before saying, through partly gritted teeth, “I should smile more.”

Seeing Silverman snarl is validating and cathartic. Yet is also feels a bit deflating given what we know about her general view of the world and the tone of her series. “I Love You, America,” now in its second season, is a resolutely optimistic enterprise its host describes as “a show about trying to be open.”

Open doesn’t mean passive, mind you. "I have no space for liars. I don't, I'm not trying to hear the side of liars,” she told Salon. “It's wealth addiction, greed as addiction, as like not being able to see anything else. And those people have an immense amount of power and influence. We've raised generation after generation to believe that money equals success at no matter what cost or how it's accrued. And that’s how we got the president we have.”

To that end, Silverman conscientiously strives to do more than simply highlight the political tribalism dividing the nation. She leaps across the chasm, getting herself invited into the homes and intimate spaces of people from the opposite side of the political spectrum, hardcore Trump boosters and ultra-right-wing activists of every stripe. Silverman makes it a point to listen to what they have to say, firsthand, challenging them at times but never disrespecting their views.

“I see a very big distinction between the liars and the lied to, between the .01 percent who will sacrifice the well-being of other humans for more stuff," Silverman said. "There's the big difference between them and the people who believe them, who are motivated by fear. They're manipulated by that fear and what is unknown to them. And of course I have room to love them, and to want to connect with them.

“There's a huge disparity between those people even though they all seem to be on the same ‘side,’” she continued. “So yeah, this show is just as much about speaking truth to power as it is about trying to connect with people who get their news from Fox News and Breitbart and the president's tweets. They’re believing liars, that's their crime. Their fears are being exploited. That's the difference.”

Operating from a philosophy of embracing the other as opposed to raising defenses against them makes “I Love You, America” unique among talk variety series, to say nothing of the fact that she's one of only two women operating in this space, the other being Samantha Bee. ("I love Sam Bee!" she said) Silverman, though, goes beyond simply punching upward at the power and corruption running roughshod over our nation — which, it must be said, is vital and provides an important service beyond mere catharsis.

Throughout each half-hour, even as Silverman challenges adversarial points of view and provides solid fact-based data to refute any falsehood, she never treats the people to whom she speaks with anything less than respect.

Using humor and the odd celebrity guest, “I Love You, America” tackles broader issues bedeviling our nation as well as mulling over recent events. Within the same episode, we might get a field piece in which Silverman embeds herself with a hardcore anti-choice organization before, in a subsequent segment, sitting down to a meal to hear NFL players Doug Baldwin of the Seattle Seahawks and Malcolm Jenkins of the Philadelphia Eagles discuss the stakes of their protest.

Silverman may mourn the outcome of the confirmation hearing, but then she pulls herself up to take viewers to Alabama, where she interviews the black female activists who spearheaded the “get out the vote” effort that prevented Roy Moore from winning a Senate seat — and gets invited to a cookout. We might get Will Ferrell dressed up as Socrates, discussing the flaws in democratic philosophy as he waxes orgasmic over panini. We might get Jon Hamm dressed as Abraham Lincoln. The unexpected rules the show’s direction.

“I do feel like the second someone feels heard their defenses go down, you know? I see that on the other side, too,” Silverman said. “Look: Jeff Flake got confronted by those women in the elevator and his defenses went down. Because we saw that, our defenses went down for a moment, and then look what happened.”

She pauses for a beat. “But then as I speak about it, I'm like, 'Wow, gee, you know, we relaxed for a second and look what happened, this disingenuous FBI investigation.' It just . . . I don't know.”

As tough as it may be for liberals to have empathy for those who identify with the right-wing right now, to be a comedian operating from a starting point of empathy in this divided era must be even tougher. Nevertheless, Silverman doesn’t see anything about her mandate fundamentally shifting as the midterm elections loom closer and the accompanying anxieties build.

“It's just crazy what a bunch of old men are doing because they're going to die. The legacy of selfishness of this administration is just astounding. And it's a bed we all kind of made. We can't just point fingers, you know. We're all kind of culpable,” she said.

Even so, she added, “I'm trying to have hope. I'm trying to believe that, you know, every person is just a child plus time who's developed certain survival skills and not everybody grows up to realize you have to unlearn those skills because they're not healthy for others or yourself. There’s a different side of me that feels a different way, of course. But all I can think about now is just the election, you know, and hoping that people's votes are counted.”