With "I Love You, America" and "The Rundown," two women join the comedy talk show fray 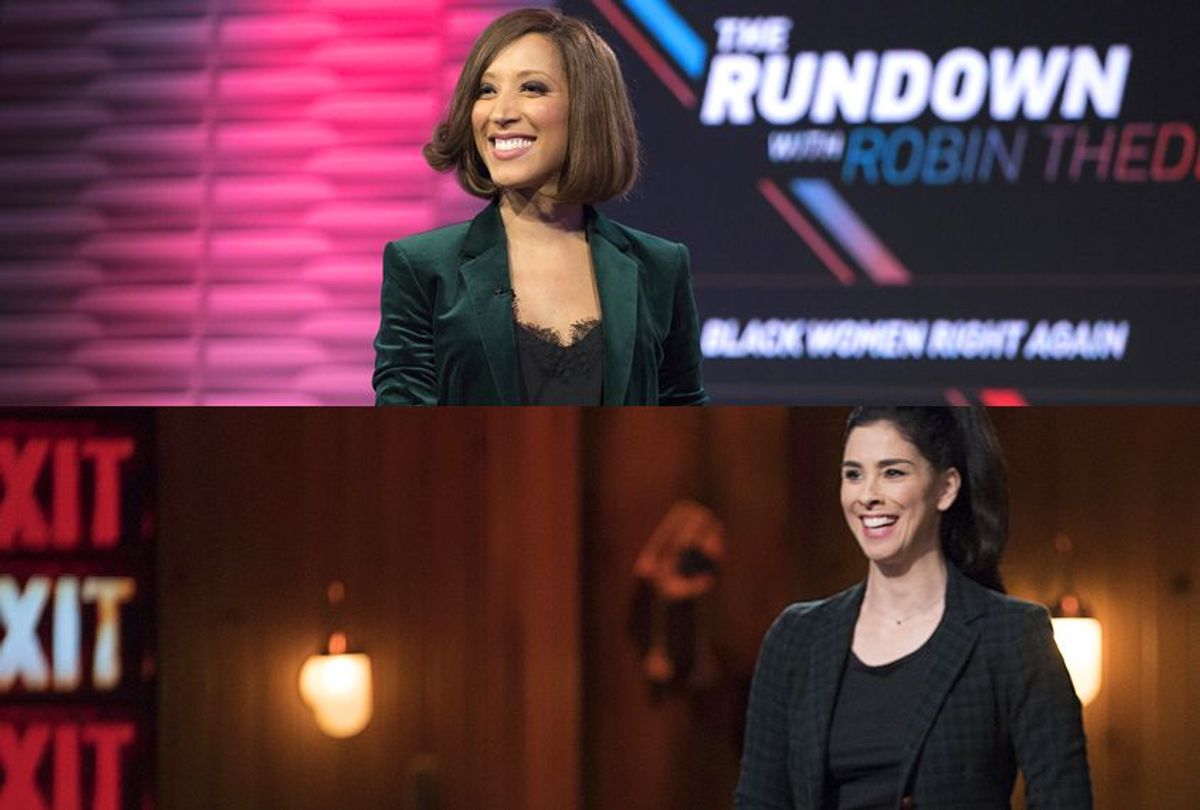 Johnny Carson’s tenure as host of “The Tonight Show” marks the last time American audiences united around a single late-night talk series. The late entertainer stands as a legend among late night hosts but the major reason for his reign is that he had no competition. Joan Rivers, Carson’s designated guest host for three years, attempted to launch her own talker at Fox, but that quickly crashed and burned. A deeply insulted Carson instituted a ban on Rivers that lasted past his 1992 retirement, through the tenure of two his successors Jay Leno and Conan O’Brien.

Many more male hosts staked out territory in late night after Carson — David Letterman, most significantly, then Jimmy Kimmel, Jon Stewart, Jimmy Fallon, Bill Maher and Stephen Colbert among them. And in a real sense, the Carson ban on Rivers impacted all female comedians with late night aspirations. Whoopi Goldberg hosted a late-night talk show from 1992 to 1993, but that aired in syndication. Wanda Sykes scored a short-lived Saturday night show on Fox, but that didn’t happen until in 2009, the same year Mo’Nique scored a deal for her own BET talker.

Thede, who previously served as head writer and a correspondent for Comedy Central’s gone-too-soon “The Nightly Show with Larry Wilmore,” hosts BET’s recently launched late night talker “The Rundown with Robin Thede,” airing at 11 p.m. on Thursday. Silverman’s Hulu series “I Love You, America,” which also debuts new episodes on Thursdays, isn’t a night-time talker per se, though it follows that format to the letter.

In launching their latenight series both performers are bucking the presumed trend for women in comedy, whose best chance for helming a talk show tends to be in a daytime deals. Mind you, that’s has worked out fine for the likes of Ellen DeGeneres and “The Talk” co-host Aisha Tyler.

Post-prime-time, however, the gender omission has been noticeable. Even when former “Daily Show” Samantha Bee launched her own show on TBS in February 2016, Vanity Fair left her out of a 2015 photo shoot that alleged to have featured “all the titans of late-night television.”

Bee and her writing staff have since gone on to win an Emmy for the “Not the White House Correspondents' Dinner,” as well as score several more nominations and enjoy heaps of critical praise. In success, Bee has opened the door to more women. But she’s also underscored that a timid approach simply won’t cut it in this territory.

Silverman acknowledges that with an ongoing gag in the form of her sort-sidekick Mather Zickel, always hovering nearby. Zickel, who goes by Mather in the show, is “just your average, run of the mill late night talk show host” Silverman explains to viewers, the un-offensive ur-host archetype the camera cuts to when Silverman gets the sense that the viewers may be getting too uncomfortable, an idea she tests by having the camera linger on naked guests in the audience, specifically close-up shots of their genitalia.

Thede’s approach is much more familiar, a hybrid of the desk-free comedy news show and a pointed sketch series resembling “Chappelle’s Show.” There are pre-taped sketches, with the first two mining comedy from viewing the black experience in white spaces. For example, in the second episode Thede is the only black woman in a spinning class where the instructor invites participants to empower themselves by singing along to a ditty that includes the n-word. To her horror, everyone does.

The viewpoint of “The Rundown” purports to accommodates a black perspective, which it does insofar as Thede spends more time riffing on topics that are most relevant to people of color. But that means just about every top headline these days qualifies as ripe for Thede to pick, enabling her to cover a lot of ground quickly without belaboring the point. The assumption is that the audience knows the heart of the story because it lives with their various stakes in every moment. Adding to its upbeat pacing is a vertical headline scroller “The Rundown” employs in the style of other news series, informing viewers which topics are in the barrel.

Thede’s humor absolutely has teeth, though with less of the aggravated snarl of her fellow Comedy Central alumni. She cuts deeply into deserving targets, but does so with the sparkle and grin of some that’s fully aware that everything is a part of the larger cosmic joke she and her viewers have been born into. She lands a punchline referring to the jeweled sword Gucci Mane used to cut his wedding cake with blasé confidence, and utters the words “President” and “Trump” with the casual disdain of someone who might as well refer to him as “that fool.” Neither need explaining, and in the case of one of those figures, “The Rundown” probably is the only late-night talk show where he’d even be in the mix.

Respect is reserved for the oppressed under the headlines and the fatigued people in an audience she strives to uplift by keeping her delivery style puckish and light. And in case that’s not enough, she employs “pop-up concert” segments, with the first week surprising customers (or extras) in a bodega with a performance by Duckwrth.

As a whole, Thede’s approach ensures that “The Rundown” refrains from being exclusive and, indeed, welcomes all members of the huddled masses yearning to breathe a little more freely. And she does it in a means that’s feels fresh and necessary.

“I Love You, America” doesn’t quite achieve that level of vitality in part because Silverman is striving greatly to be safe, nudity notwithstanding. She has a steeper hill to climb due to her platform: No streaming talk series has taken off. Perhaps Chelsea Handler’s recently ending her Netflix talk show is a tacit acknowledgment of this, but the larger challenge is in the format’s value as a filter for current events. Even weekly shows display awareness of this by digging deeply into top-of-mind issues while speaking to the hot-button happening of the last seven days.

“I Love You, America” feels like it could have been done at any time by anybody. Silverman merely happens to be famous target of the right for being an outspoken liberal as well as a proud purveyor of dirty humor.  She’s also established herself as an acquired taste among many people, putting her in a different position than Thede from the outset.

In her Hulu series, Silverman’s goal is to “find common ground,” which she does by traveling to small towns dominated by Trump voters. The series debut takes her to a working-class suburb of New Orleans to speak with a family whose matriarch opines that Barack Obama “took what it means to be an American out of America,” implying that Obama made handouts the new normal.

Barely an inhale and exhale later, Silverman finds out that the entire family benefits from government subsidized healthcare – even the head of household, a full-time student.

Episode 2 travels to Texas, where Silverman chats with Trump voters who are immediately on the defensive, until she asks them to tell a story about a time they defecated in their pants. Turns out everyone has one! And everybody laughs, because everybody poops.

Silverman explains in her series debut that sometimes “I Love You, America” will be aggressively fun and silly and sometimes it’ll be totally earnest. “Manage your expectations,” she urges the audience. But shouldn’t we have minimum expectations that the show can minimally fulfill its implied mandate by inspiring viewers to truly find common ground beyond a shared affection for scatological humor.

It is early days for both shows, in a landscape that has many, many late night talk shows (or talk shows resembling nighttime talkers) vying for viewership. This is an indication of need, especially these days, to process the unthinkable through satire and humor if only to keep us from going crazy. “I Love You, America” may settle on this idea as Silverman becomes more assured in her approach to bridge-building.  But until that happens it’s good to know that Thede clearly gets it, evident in her sign-off.

“No matter what color you are,” she says, “stay black.”