Trump, McConnell and Kavanaugh have changed the game; there will be no more business as usual 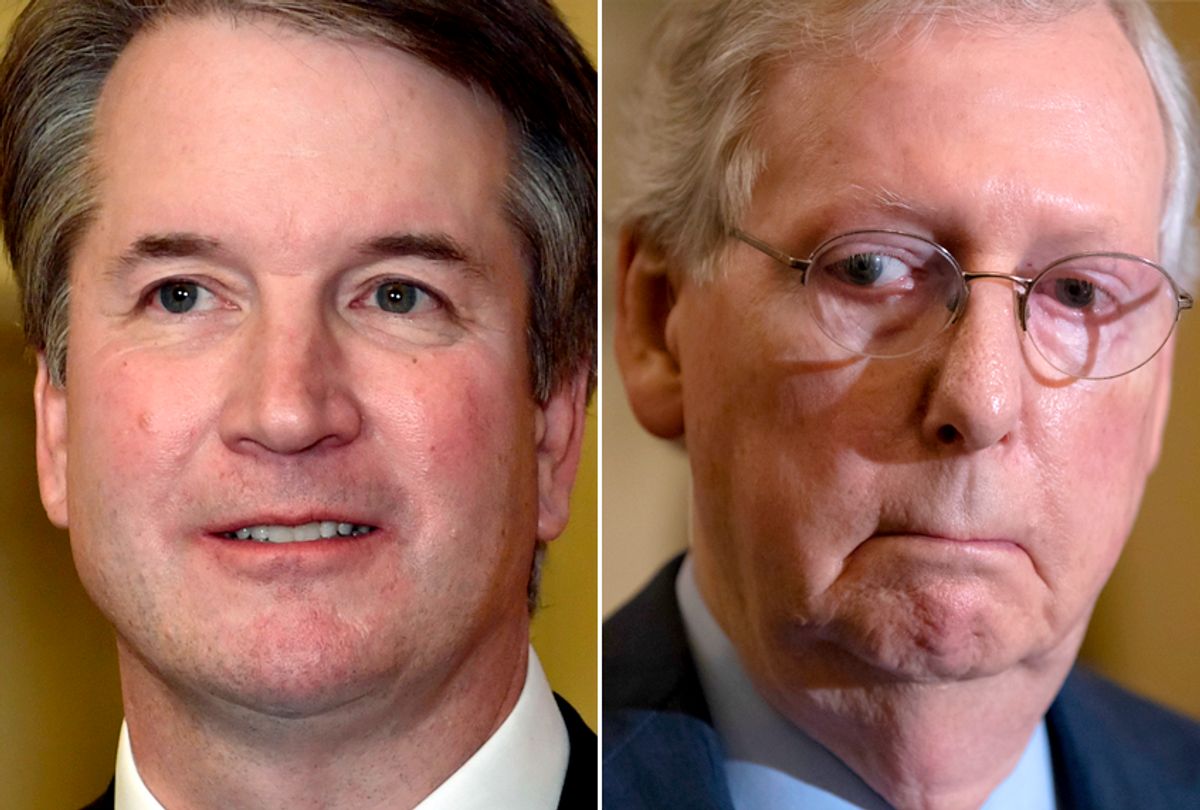 Not so long ago, if a journalist working for a major American news organization was murdered by the government of one dictator, inside the country of another dictator, the United States of America would have taken action, or at least had something to say about it. Those days are gone.

There was a time, not so long ago, when the United States would not have ordered that children be separated from their families and be held in tents in concentration camps inside the borders of this country. Gone.

It was only two years ago that a president of the United States nominated a judge from the D.C. Circuit Court of Appeals to the Supreme Court who was not an accused sexual abuser and a drunk. That president, and that Supreme Court nominee are gone.

There was a time not so long ago that the Department of Justice voting rights division would have filed lawsuits challenging state laws like those in North Dakota and elsewhere that make it difficult, if not actually impossible, for people to vote. Gone.

Republicans in this country don’t even bother to pretend anymore that they’re interested in justice and playing by the rules. They have declared war on women, on workers, on people of color, on immigrants, on the poor and dispossessed, on organized labor. They have gone to war against everything that isn’t white and male and wealthy.

With the confirmation of a second justice of the Supreme Court under a cloud of sexual abuse allegations, Republicans have shown us who they are and what they stand for. Like the American military in Vietnam, which burned down villages in order to save them, Republicans are willing to tear down democratic institutions in order to save them for themselves. The very next day, they have the audacity to demand respect. They denounce peaceful protestors as “an angry mob” that is “attacking” senators at their homes and in the Capitol. They want “civility” and “respect” to return to the public square. They want respect for the court they just besmirched and dishonored.

Did you see the outrageous victory lap Trump took on Monday night at the White House with his fake “swearing in” of Justice Kavanaugh, who had already been sworn in and started his job on the Supreme Court last Saturday? Talk about dropping pretenses. Trump did everything but burn a photograph of Dr. Christine Blasey Ford on national TV. He called the charges against Kavanaugh “a campaign of political and personal destruction based on lies and deception.”

Earlier in the day, he called the case against Kavanaugh a “hoax.” “It was all made up, it was fabricated and a disgrace.”

“It was very unfair what happened to him,” Trump said of Kavanaugh to cheers and applause in an address to an association of police chiefs in Orlando, Florida. “False charges, false accusation. Horrible statements that were totally untrue. It was a disgraceful situation brought about by people who are evil. And he toughed it out. We all toughed it out together.”

A political pep rally at the White House was the perfect ending to a 40-year campaign by movement conservatives to take over the third, supposedly apolitical, branch of government. The right-wing struggle to take over the court began in the 1950’s after the Brown v. Board of Education decision mandated desegregation of schools. Across the south and Midwest, billboards with “Impeach Earl Warren” sprang up along highways and country roads. Chief Justice Warren, a California Republican appointed by a Republican President, Dwight Eisenhower, was seen as a traitor to the cause. He was supposed to get on the court and toe the line and put uppity blacks in their place, not in “our” schools.

Other justices appointed by Republican presidents were similarly disappointing to the far right. John Paul Stevens, who recently incurred Republican ire when he broke with tradition by publicly opposing Kavanaugh’s nomination, was appointed by Gerald Ford. Anthony Kennedy, the so-called “swing vote” on the court for the last couple of decades, authored the 2003 decision in Lawrence v. Texas, striking down anti-sodomy laws. He was joined by Sandra Day O’Connor, appointed by Ronald Reagan, and David Souter, appointed by George H.W. Bush. He was also the deciding vote and author of the Obergefell v. Hodges decision, legalizing gay marriage in 2015.

Republican appointed justices like Souter, O’Connor, Stevens, and Kennedy were labeled “squishes” by the right-wing Federalist Society, established in 1982 with the sole goal of putting a Republican majority on the court that could be trusted to vote the way the right wing wanted them to vote. The Federalist Society stood behind Senate Majority Leader Mitch McConnell in 2016 when he threw out the rule book and sat on Obama’s appointment of Judge Merrick Garland to the Supreme Court until Trump won the presidency and right-winger Neil Gorsuch could be pushed through. And the Federalist Society was a champion of the Kavanaugh appointment, with its president, Leonard Leo, working in conjunction with the Judicial Crisis Network to support his nomination.

The Judicial Crisis Network is a political action committee organized as a 501(c)(4) nonprofit that does not have to report the source of its donations. Recent tax filings by the organization revealed that most of its funding comes from the Wellspring Committee, another nondisclosing nonprofit run by Ann and Neil Corkery, who have also been involved in the Catholic League, which lobbies against separation of church and state, and the National Organization for Marriage, which fought a long campaign against marriage equality.

This is what the abandonment of pretense looks like: a right-wing Republican political campaign complete with so-called “dark money” donations from right wing billionaires whose names we will never learn in a shifting, secret shuffle of money from one arch conservative front group to another. Not to elect someone to office, but to appoint a right-wing political hack like Kavanaugh to the Supreme Court.

The Federalist Society and the Judicial Crisis Network and their minions in the Republican Party aren’t just concentrating on the Supreme Court however. They’ve been plugging young movement conservatives onto the Federal bench all over the country in district court judgeships and slots on the Circuit Courts of Appeals. There was rejoicing on the right last Saturday when Kavanaugh was sworn in not only because they now controlled a 5-4 majority on the Supreme Court, but because his position on the D.C. Circuit Court of Appeals is open, and Trump can fill it with a Kavanaugh clone — from a list provided to him by the Federalist Society, naturally.

I can hear the whining from the right already: Democrats do the same thing. They fill their judgeships with liberals, just like we fill ours with conservatives! This would be a compelling rejoinder if it didn’t ignore the fact that Mitch McConnell filibustered so many of Obama’s appointments to the Federal bench that the Democrats had to change the filibuster rules to get any judges at all through. Which led to the Republicans retaliating by changing the filibuster rules on Supreme Court appointments with the so-called “nuclear option” in 2017 to push the nomination of Gorsuch through with a simple majority vote. . Which is how we got to where we are today, with a Supreme Court that is fully politicized, and a federal judiciary that is on its way to the same.

It’s long past time to call their bluff. If they’re going to disrespect the Supreme Court with their flagrant politicization not only of the court, but of the laws its decisions will affect, then it’s time to show disrespect in return. No more respect for Supreme Court justices like Gorsuch and Kavanaugh who took the bench after political campaigns that spurned legal norms. They should be shunned. Social organizations in Washington D.C. should leave them off the invitation list. No more Kennedy Center Honors box seats. No more invitations to art or theater openings. If you see them on the street, or in the post office, or in a restaurant, confront them. Tell them they don’t have your respect. Tell them they are illegitimate justices on an illegitimate court.

Democratic lawyers and law firms should organize what amounts to massive resistance to the politicization of our courts and laws. Set up a system to take pro bono cases to challenge illegitimate laws and regulations imposed by the Trump administration and the Republican congress. Throw a blizzard of monkey-wrenches into the gears of justice. Sue them all. File so many appeals, it will tie those Republican Federalist Society judges in knots.

And please, at least one lawyer who gets to argue a case before the Supreme Court, especially a case you know they took just so they can rule against you, stand up in court and let Kavanaugh know that he doesn’t have your respect. Do what he did before the Senate Judiciary Committee when he was asked questions by Democrats. He didn’t answer their questions. He just made speeches. So make a speech that’s unresponsive and addresses some other issue you want to bring up. He treated the Democrats with contempt. Treat him with contempt. Let him know it. You’re not going to get his vote anyway, so tell him what you think.

If they’re going to overtly and purposefully use the court to achieve what everyone knows are political ends, make it clear as a bell that we see what they’re doing, and we are contemptuous of them and what they stand for. There is a price to be paid for going along with an undemocratic, ignorant buffoon like Donald Trump and a Republican Party that has completely abandoned whatever democratic principles it once had.

There are always a dozen reasons to do nothing, but there is one good reason to act:  to stop them. They are dishonorable thieves out to steal the soul of our country. That, we cannot allow.

No more business as usual. No more civility. No more respect. Point a finger of ridicule at them. Make them stand naked before the world in their corruption and disdain for norms and the law. Show them the disrespect they deserve. Make their personal lives a living hell. Take to the streets and protest their Supreme Court decisions ordered up by the Heritage Foundation and the Federalist Society. Make it clear we know what they’re doing to this country and that we aren’t going to stand for it.

Bring a goddamned machete to the knife fight and slash away. What have we got to lose?