Far from home, Dad's egg curry is the one thing I didn't know I'd miss

You can’t always carry people, but a packet of chili fits in any bag 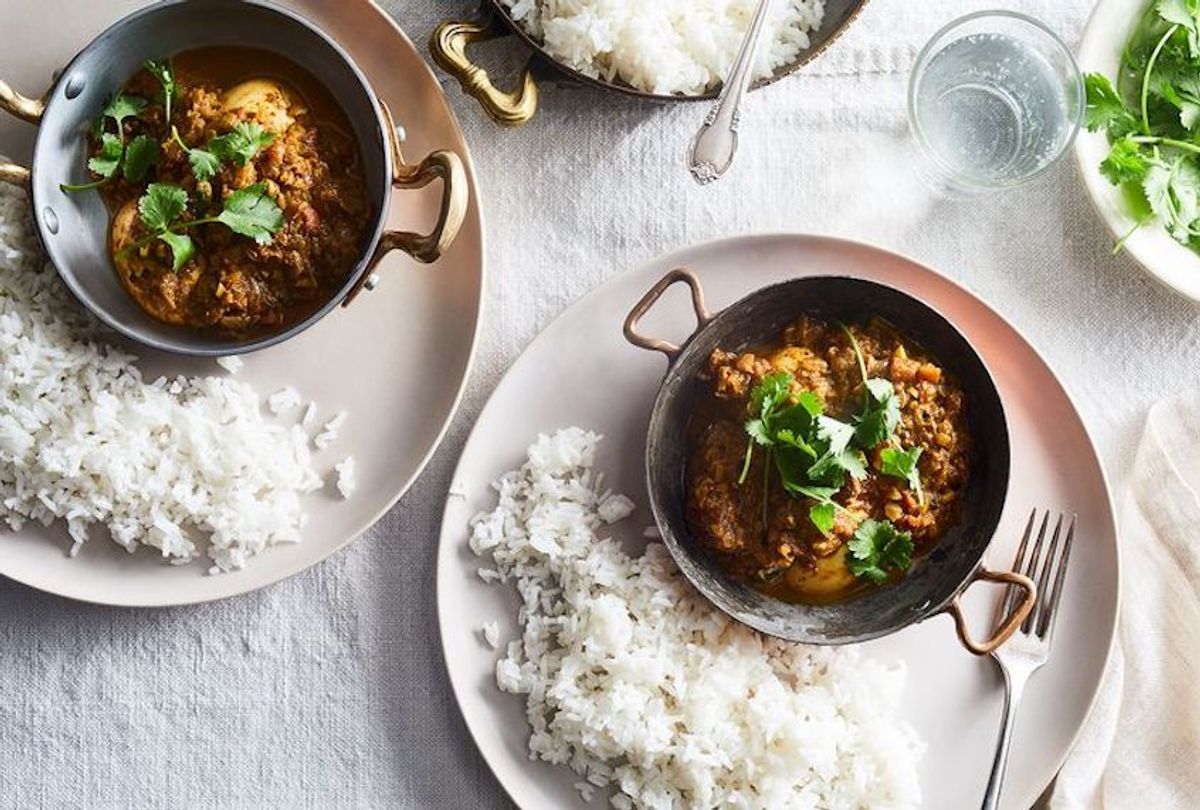 I’m standing in the cramped kitchen of my first apartment, on the phone with my dad. He’s coaxing me through his egg curry recipe and even though my aversion to eggs is infamous, I’m at the point where I’ll eat anything that tastes like home.

Before I left Bengaluru, my cooking was limited to Pillsbury cake mixes and seasoning the salad at the table with salt and pepper. I’d almost never watch my parents in the kitchen. As a child, I wasn’t terribly interested in food unless it was fried in batter or doused with spaghetti sauce or washed of all piquant flavors. Even as I grew older and my palette moved on from the kid’s menu, cooking still seemed like a grown-up activity. I was in the business of eating.

That was still true when, at 21, I moved to New York City. But the heady mix of independence, pizza, and cereal three times a day got old quicker than I had anticipated, and at the end of a few weeks I really wanted what can only be described as "home food." So, I finally started cooking to bring back the flavors I missed so deeply. I craved the rich tanginess of yellow dal and jacked-up shrimps sautéed in fiery red masala. I wanted white rice with real chicken curry, not that sickly-sweet excuse for butter chicken from the takeout joint down the street. We eat to nourish, to soothe, but also to recall a place or a feeling. Food offers a connection to the familiar, and what’s on our plate is sometimes the closest thing we have to transporting ourselves through space and time.

Slowly and tentatively, with not a small amount of anxiety, I started learning my way around a kitchen. Parents must have a knack for predicting their child’s appetite, because mine packed my suitcases with everything from turmeric powder and cumin to basmati rice and ginger-garlic paste to a pressure cooker and a pink plastic microwave rice cooker. When my brother moved stateside six years before me, I remember writing and sticking labels on small plastic boxes of coriander and chili powder. Clothes, shoes, sheets, towels could be bought, but where was I going to find Aachi Pepper Chicken Masala in Manhattan?

In that first kitchen, I'd carefully measure cups of rice and water, or stare obsessively at a bubbling pot of curry, anxiously wondering whether the meat had cooked through. I'd press the phone between my shoulder and ear as my mum would walk me through a simple yogurt marinade. I'd rather go hungry than eat an omelet for dinner, but just as altitude renders plane food tasteless for me, homesickness had a strange effect on my appetite. And it was telling me to make egg curry.

My tryst with eggs goes back a bit further than that though. I grew up a picky eater and I held a stubborn conviction that any kind of egg — whether sunny-side up, poached or omeleted — was gross. That’s still mostly true, though my convictions somewhat waiver in the face of the eggs scrambled with fresh green chilis, tomatoes and cilantro, or slices of bread soaked and fried in eggy masala batters. The ones that filled my childhood.

My dad’s egg curry is made with hard-boiled eggs. After a long day’s work, he seemed to relax through cooking, leaning on a repertoire based on a long-honed understanding of spices and flavors.

When I lived in New York, I would make trips back home to Bengaluru, and that's when I really started to pay attention in the kitchen. I’d watch as he fried onions and tomatoes, added an array of whole and ground spices, and simmered curry leaves in a thick, spicy gravy, holding bold notes so distinct to regional cuisine from South Indian states.

Making the curry myself, I tentatively added quarter spoonfuls of spices, fearing that I would easily overwhelm the masala and render it inedible. It always turned out alright, though it would never taste the same as my dad’s. But for a few moments, while tearing through pieces of egg over undercooked rice, I didn’t feel so far away from home. And that just made me want to cook more.

A few weeks ago, several months after my husband and I moved to Bengaluru from New York, I was going to make my dad’s egg curry for dinner when my mum called and asked if we’d like to come over to their place to eat. I told her I had already boiled four eggs for my curry. “Tell your dad to do it,” she said. So, we packed the eggs in an old takeout box and headed off. He wasn’t home yet, so I chopped onions in anticipation.

Once he got there, within 20 minutes we had a thick gravy simmering around eight yolk-down egg halves. He asked me to taste the masala to see if the seasoning was right. The chili hit my tongue almost immediately, and even though I was fully prepared for it, I needed a second to recover. It would mellow as it cooked with the egg, my dad said, but he asked if I wanted it milder. "No, let it stay that way," I replied. We sat down to eat it, and as promised, the sharpness had turned into a delicious meld of spice and heat and tomato.

This egg curry is a dish that’s come to mean family to me. You can’t always carry people, but a packet of chili powder fits in any bag. It took me 20 years to realize that it will always bring the taste of home to my plate, wherever I am in the world. And it’s even better when my dad makes it.