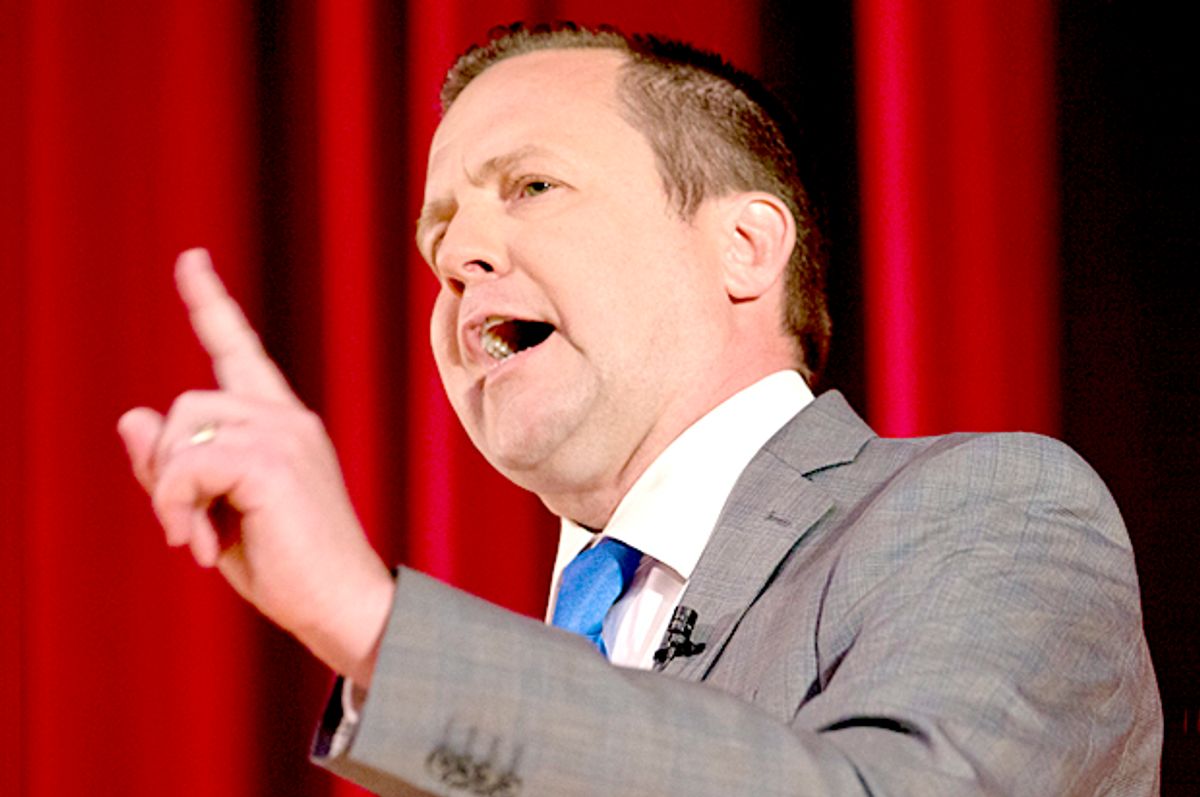 On Thursday, Mediaite reported that Corey Stewart, the Virginia GOP candidate challenging Democratic Sen. Tim Kaine, asked his supporters to "RSVP To Ian MacDonald" to attend a meet-and-greet with him and the Accomack County GOP, which is scheduled for Saturday at the Hampton Inn on Chingoteague Island.

Ian MacDonald is apparently a supporter of George Lincoln Rockwell, the founder of the American Nazi Party. Earlier this year, he shared a meme on Facebook in which he said "me: i hate liberals. them: so what are you, a republican?" and below that a photo of Rockwell, seemingly suggesting he is affiliated with him.

This is not a one-off occurrence. MacDonald also helped organize an April "Eastern Shore Meet and Greet With Corey!" at the Club Car Cafe in Parksley. Stewart also named MacDonald as the campaign's "Volunteer of the Week" in the summer.

Asked for comment by Mediaite, MacDonald denied supporting neo-Nazism and insisted the post only was meant to indicate he was an "independent conservative," but refused to answer questions about how he originally came by the image and decided to use it. The Republican Party of Virginia asserted MacDonald is not employed by them, but also that they did not view his actions as problematic because he took down the image when informed of who it was.

Stewart himself, when asked for comment, said "Here goes the Left again, trying to destroy someone based on false accusations," seemingly comparing the controversy to the confirmation battle over Brett Kavanaugh.

However, this is far from the first time Stewart, a Prince William County supervisor who chaired President Donald Trump's campaign in Virginia, has been caught in the company of extremist figures.

Last year, Stewart appeared with white nationalist Jason Kessler at an event calling for the resignation of a black Charlottesville City Council member who wanted to remove the city's statue of Robert E. Lee. At the time, Stewart praised Kessler's group for fighting "real racism." A few months later, Kessler would go on to stage the deadly neo-Nazi "Unite the Right" rally in Charlottesville.

Stewart also celebrated Trump's inauguration night with white supremacist activist Paul Nehlen, who has appeared on the podcast of Klan leader David Duke, mocked the Holocaust, and published the personal information of journalists and activists who criticized him noting (incorrectly) that "74 are Jews." At the time, Stewart told Nehlen he was his "personal hero." Stewart has since claimed that he stopped supporting Nehlen after he "started saying all that crazy stuff," but subsequent reporting has found Nehlen was sharing white nationalist content months before Stewart disavowed him.