"I'm president and you're not": Trump mocks Lesley Stahl in brash "60 Minutes" interview 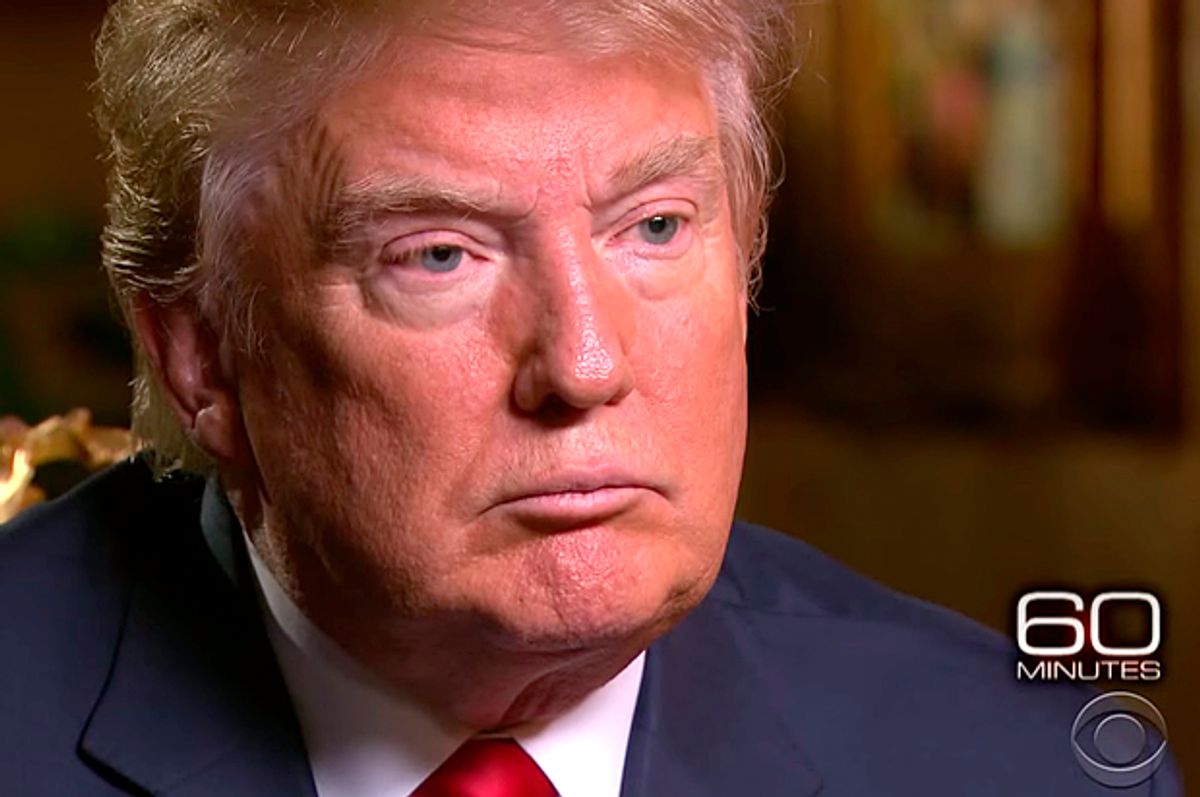 In the interview that aired on Sunday the president tried to explain his attack on Dr. Christine Blasey Ford, the California research psychologist who claims Supreme Court Justice Brett Kavanaugh sexually assaulted her when they were both teenagers, and gloated about Kavanaugh's confirmation to the High Court.

"Had I not made that speech, we would not have won. I was just saying she didn't seem to know anything and you're trying to destroy a life of a man who has been extraordinary," Trump told "60 Minutes" host Lesley Stahl about his Mississippi speech ridiculing Ford's version of events. To back up the validity of his actions, Trump argued that "I will tell you this. The way now Justice (Brett) Kavanaugh was treated has become a big factor in the midterms. Have you seen what's gone on with the polls?"

After insisting that he treated Ford with respect in his speech, the president refused to address whether he had effectively accused Ford of lying. Instead, Trump told Stahl, "I'm not going to get into it, because we won. It doesn't matter. We won."

The president also lashed out at critics who claim that the White House is in chaos, using one of his most famous epithets — "fake news" — to describe news reports to the contrary.

"I'm changing things around and I'm entitled to," Trump told Stahl. "I have people now on stand by that will be phenomenal, they'll come into the administration. They'll be phenomenal."

When Stahl pointed out that this reinforced the media's impression of a Trump administration that can't hold down its own staffers, Trump replied that he had some people in his cabinet that he was "not thrilled with" and others that he was "beyond thrilled with." Although he refrained from naming specific individuals, when asked about Secretary of Defense Jim Mattis the president opined that "I think he's sort of a Democrat, if you want to know the truth. But Gen. Mattis is a good guy. We get along very well. He may leave. I mean at some point, everybody leaves. Everybody. People leave. That's Washington."

Trump also spoke about Russian President Vladimir Putin, the foreign leader whose alleged meddling in the 2016 presidential election has been the core issue in the ongoing Trump-Russia scandal. When Stahl asked if he believed that Putin was involved in assassinations and poisonings, the president responded, "Probably he is, yeah. Probably." Trump added, "But I rely on them; it’s not in our country." The president also downplayed the threat posed by Russia to American democracy by claiming that China has also meddled in American elections, and even insisted that the idea he would seek Russia's help was ludicrous.

"Do you really think I’d call Russia to help me with an election? Give me a break. They wouldn’t be able to help me at all. Call Russia. It’s so ridiculous," Trump told Stahl.

Trump also defended his relationship with North Korean dictator King Jong-un after Stahl read off his record of human rights violations and asked how he could say that he loves him. "I like — I get along with him, okay?" Trump responded. When Stahl pointed out that he claimed he loved him, the president responded "That's just a figure of speech." He also claimed that his positive relationship with Kim Jong-un is why there have been no further threats against the United States

"I think something's happening. Something's changing, and it'll change back again. I don't think it's a hoax, I think there's probably a difference. But I don't know that it's man-made. I will say this. I don't want to give trillions and trillions of dollars. I don't want to lose millions and millions of jobs. I don't want to be put at a disadvantage," Trump told Stahl. When he was asked about the thousands of scientists who have insisted that it is man-made and that it poses an existential threat to humanity, the president replied that "you'd have to show me the scientists because they have a very big political agenda."

The interview got most heated when Stahl pressed the president about migrant children being separated from their parents at the U.S.-Mexico border. The president deflected by pointing to his predecessor.

“When I say Obama did it, you don’t want to talk about it," Trump complained.

“I disagree, but I don’t wanna have that fight with you,” Stahl replied.

“Lesley, it’s OK,” Trump responded. “In the meantime, I’m president and you’re not.”