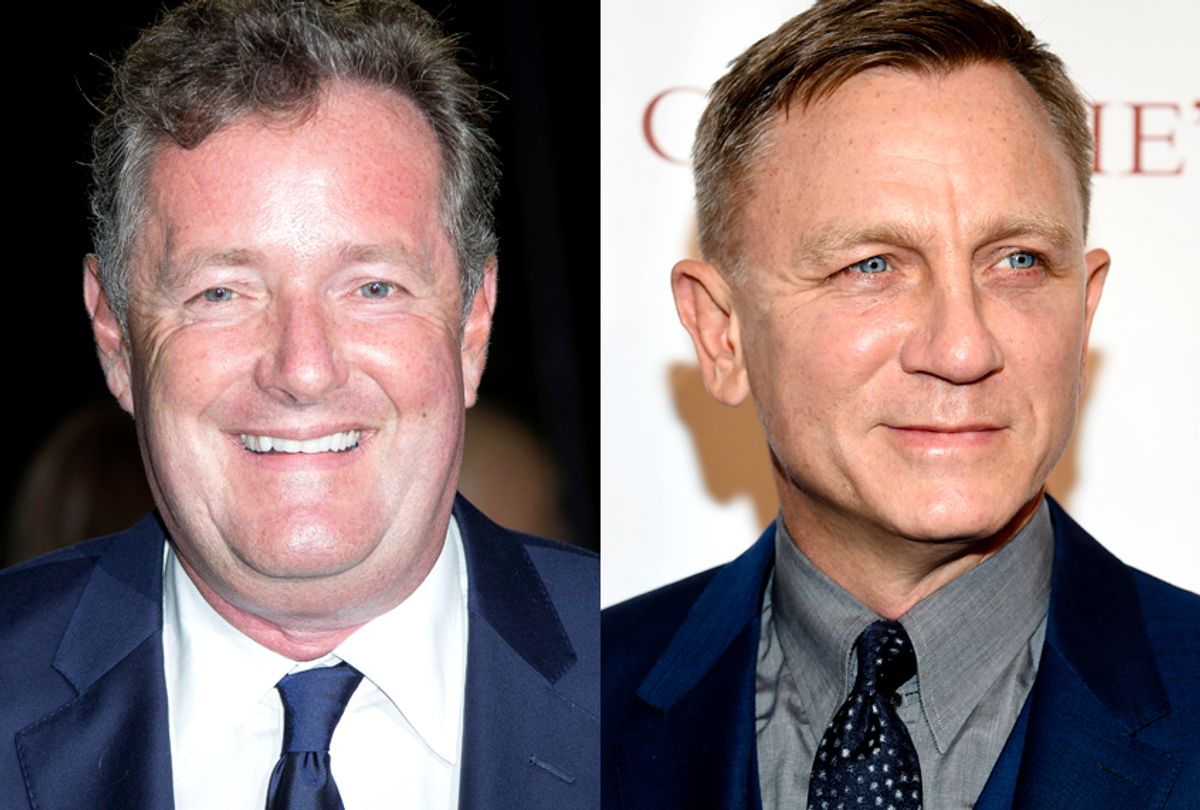 Piers Morgan has, once again, inspired an unholy row on Twitter. This time singling out Daniel Craig — of all people — for having been, wittingly or not, emasculated by activity associated with fatherhood.

Response from the digital mob has been ferocious, with none other than superhero Chris Evans joining the battle. Even Susanna Reid, one of Morgan's co-hosts on the ITV morning chat show that he headlines, @GMB "Good Morning Britain," piled on.

You really have to be so uncertain of your own masculinity to concern yourself with how another man carries his child. Any man who wastes time quantifying masculinity is terrified on the inside. https://t.co/9jsHZ3WKRn — Chris Evans (@ChrisEvans) October 16, 2018

No woman has an issue with a man carrying a baby in a papoose.

This is YOUR issue. https://t.co/bAaItvVizP

Daniel Craig has managed to stay silent. As far as I can tell the 007 star's last tweet was August, 2017;  just another reason to admire the man. Morgan's fiercest critics appear activated by what they identify as the mouthy broadcaster's assault on modern fatherhood. Heartwarmingly lovely images of leading men in movies and on television, abroad on the land with children strapped to their chests have been marshalled as proof of the much more virtuous, direct and daily role that the male australneoliberalicus is taking in child rearing (I am especially fond of the photo of Ethan Hawke. His son and my daughter were born around the same time, so it brings back fond memories from what seems like a very short 16 years ago). Fathers around the globe are joining the fray, proudly posting images of themselves and their beloved children bonded together by love, velcro and nylon.

Wives and mothers defending the honor of their menfolk will not be denied.

Screw you @piersmorgan. What an absolute dude my husband is. Masculine and all. pic.twitter.com/FVrXvLpD3t

One very long day later Piers Morgan is still energetically defending himself, intoning his children's admiration for his arm's-length parenting method — all very pleasingly British in an adorably atavistic way.

My children love me most for never carrying them in a papoose. https://t.co/cQtfVUTNxY — Piers Morgan (@piersmorgan) October 15, 2018

Oh I carried all my kids, Leigh. I just did it with my arms, not a papoose. https://t.co/96qFHzYzVr

There has been a ruckus, too, about Morgan's terminology, but never mind the papoose reference. Ethnolinguistic misappropriation, insensitivity — not to mention mispronunciation — is a subspecialty of British culture (pro-BREXIT or otherwise), and Piers Morgan is nothing if not British. Ugly as it is, papoose is in common use all across that green and pleasant land. So there's that controversy taken care of. And in the meantime back in England, Morgan and his long-suffering co-presenter Susanna Reid have won a significant broadcast award for their work on @GMB

On the red carpet tonight.. now THIS is how you hold a baby. #NoPapoose #ITVPalooza pic.twitter.com/GOboP0wd19

I carried both of my children in a sling back when I was lucky enough to be walking point on the babycare mission, and, truth be told, the heart-burstingly close proximity to one's children that a baby sling provides wasn't nearly intimate enough for me. If I had my way I would have carried them, one and then the other, born just 15 months apart, in a marsupial pouch. Sadly, the only male mammal blessed with this anatomical gift is the yapok, a water opossum found in a range from Mexico through Central and South America (Apparently there's also a dog-like critter in Australia called a Thylacine that may or may not be extinct, which also has a pouch).

If only I could have, I definitely would have carried the children my wife birthed inside me in a pocket just below my sternum. Nice and warm in there, it would have been really excellent if they could have popped their little heads out and had a look around, given me and the world a proper inspection as I ordered my latte, and then disappeared back inside the old pouch.

I suppose I would prefer this pouch to become available after the babies are born and then close up again when infancy gives way to childhood. It is hard enough keeping the front of my shirt clean these days and I shudder to think about the maintenance implications of an open flesh pocket during onset of middle age. From what I can tell from photos of the two men, Craig would fair much better than Morgan when it comes to male marsupial pouch maintenance. That would probably work out fine, as I get the feeling Morgan doesn't share my yearning for a kid-pocket, and I like to think Craig would totally dig it.

While we're on the subject of the Twitter war between Piers Morgan and the whole wide world over Daniel Craig's baby sling, may I hasten to point out that in the photo that Morgan has chosen to single-out Daniel Craig for effeminization, Craig is sporting a baseball cap embossed with the Liverpool Football Club insignia; and Morgan is an ardent and occasionally obnoxious supporter of Arsenal Football Club, based in Islington in London. Far be it from me to say that Morgan's chauvinisms are not sincerely held, but for those not in the know, this is a sporting rivalry akin to that of the Boston Red Sox and the New York Yankees.