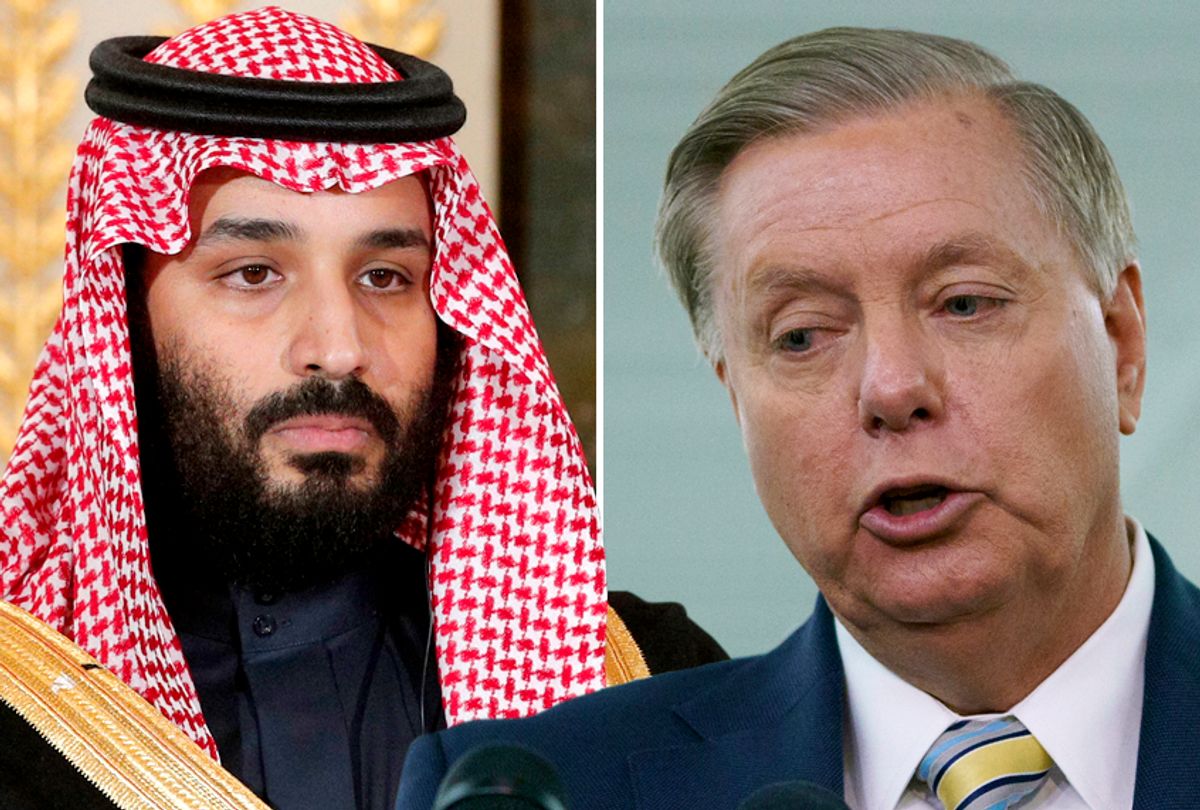 Sen. Lindsey Graham, R-S.C., has said that he believes Saudi Arabian Crown Prince Mohammed bin Salman ordered a hit on Jamal Khashoggi, a Saudi journalist who contributed to the Washington Post. Khashoggi has been missing since he entered the Saudi consulate in Istanbul, Turkey, on Oct. 2. Numerous reports have suggested he was killed there by Saudi agents, who may have dismembered and removed his body shortly thereafter.

"Nothing happens in Saudi Arabia without MbS knowing it," Graham told Fox News, according to a report by Reuters. He added that "I’ve been their biggest defender on the floor of the United States Senate. This guy is a wrecking ball. He had this guy murdered in a consulate in Turkey and to expect me to ignore it. I feel used and abused."

Graham suggested that the crown prince's public image as a reformer of the Saudi monarchy is now in ruins. "The MbS figure is to me toxic," the senator said. "He can never be a world leader on the world stage,"

Graham then reverted to depicting the possible assassination of the American-based journalist as a personal slight.

"I know what I’m going to do. I’m going to sanction the hell out of Saudi Arabia," Graham said. "I feel personally offended. They have nothing but contempt for us. Why would you put a guy like me and the president in this box after all the president has done? This guy’s gotta go" -- apparently a reference to Crown Prince Mohammed.

The terrible optics for Saudi regime are only getting worse. Another recent report suggests that the government may try to characterize Khashoggi's death as an interrogation attempt gone wrong due to rogue intelligence operatives, according to The Wall Street Journal. The Turkish government has said that Khashoggi was killed by Saudi agents after he entered the Istanbul consulate building, and claims it has audio and video recordings that prove the case.

Graham's outrage echoed the sentiments of Sen. Marco Rubio, R-Fla., who told CNN's Jake Tapper on Sunday that he felt a strong reaction against Saudi Arabia would be necessary if it became clear that the Saudi government had killed Khashoggi.

"Here's the bottom line: I believe the Trump administration will do something," Rubio told Tapper. "The president has said that. But if he doesn't, Congress will. That I can tell you with 100 percent certainty. With almost full unanimity, across the board, Republicans and Democrats. There will be a very strong congressional response if in fact the Saudis lured him into that consulate, murdered him, cut up his body and disposed of it. There is going to be a very strong congressional response."

When asked about the fact that President Trump has been tepid in his reaction to the event — refusing to blame Saudi Arabia or pull American officials out of an upcoming economic conference in that country — Rubio responded, "I'm glad he didn't offer any specifics, because that's something that should be thought through carefully. But there needs to be a strong response if in fact this proves to be true. If they lured this man into that consulate, they went medieval on him, and he was killed and he was chopped up and they sent a death crew down there to kill him and do all this, that'd be an outrage."