Abby Huntsman rips Warren's DNA test on "The View": "I found this to be pretty embarrassing for her"

Meanwhile, Joy Behar wonders if Democrats are just getting distracted, urging them to "keep your eye on the ball" 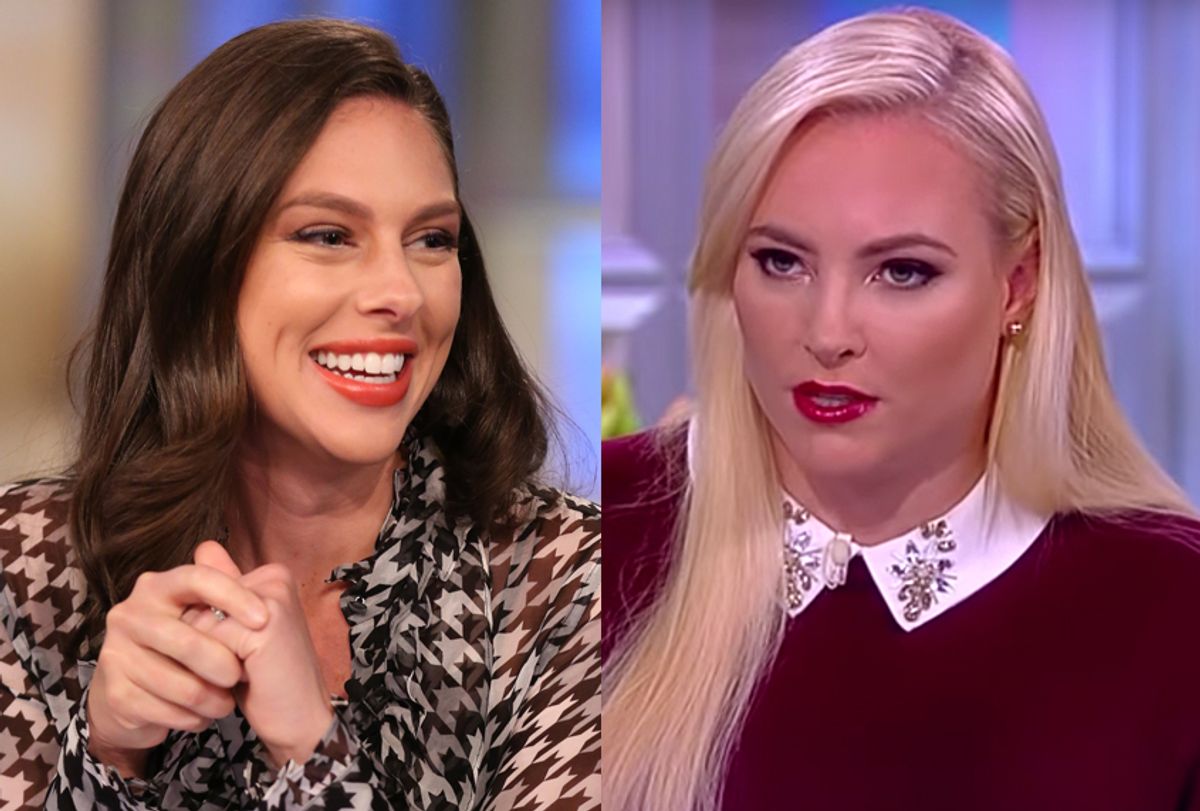 The women of "The View" on Tuesday discussed the news that Sen. Elizabeth Warren (D-MA) had released the results of a DNA test attempting to prove that she has Native American ancestry, with co-host Abby Huntsman blasting the situation as "pretty embarrassing."

Warren, who is perceived to be a leading contender for the Democratic presidential nomination in 2020, hoped the results, which determined there was "strong evidence" that she had a Native American ancestor six to 10 generations back would silence President Donald Trump's insistence of referring to her as "Pocahontas."

"I hate that she took the DNA test because she was taunted," co-host Sunny Hostin said on Tuesday's show. "I hate that President Obama gave out his birth certificate, because Trump was such a birther and questioning his citizenship. I don't think that you go down into the gutter with Trump. I think it's a mistake."

Co-host Abby Huntsman agreed, asserting that she did not "know why any politician today thinks that they can out-bully Trump, because thus far no politician has been successful."

"Warren — I've always looked at her as being someone that is policy-driven . . . I think of her as a smart woman and not getting into petty politics, and that's exactly what this is," Huntsman continued. "I found this to be pretty embarrassing for her. I think majority of this room right here is probably more Native American than Elizabeth Warren is. Even the Cherokee tribe is not wanting to claim her."

Huntsman was referencing a statement from the Cherokee Nation, which said that using a DNA test to determine connection to any indigenous tribal nation was "inappropriate and wrong." "Senator Warren is undermining tribal interests with her continued claims of tribal heritage," the statement added.

Co-host Whoopi Goldberg countered that Warren was not claiming tribal heritage, but rather verifying the family stories that she was told growing up. As Goldberg saw it, Warren had taken the DNA test in response to Trump's promise that, as he said at a campaign rally in July, if she did "and it shows you're an Indian," he would donate $1 million to the charity of her choice.

The crux of Trump and Republicans mocking and questioning Warren's ancestry is to promote the assertion that she dishonestly framed herself as a minority to attain Ivy League positions as a law professor. However, such claims were refuted by an exhaustive investigation conducted by the Boston Globe, which found that, at every institution where Warren was hired, she was not only seen as a white woman but also her ethnicity was not considered.

"This is a made-up issue," Alan Dershowitz, Harvard Law professor emeritus, told the Globe in response to whether Warren's heritage affected her hiring at Harvard Law School. "This is not an issue that’s worthy of the president or anyone else."

But it is less clear why Warren chose to self-identity as Native American and a minority law professor on several different occasions beginning in the late 1980s, even if her great-great-great grandmother was a Native American women as was believed and passed down in her family.

"I wish that I had been more mindful of the distinction between heritage and tribal citizenship," Warren told the Globe. "Only the tribes can determine tribal citizenship and I respect their right. That’s why now I don’t list myself here in the Senate as Native American."

Unfortunately, such nuance has been absent from the present conversation, with Democrats holding up the DNA test as more evidence to embarrass Trump and his empty promises and Republicans exploiting the voices and concerns of Native people who do not privilege genetic tests to determine one's citizenship and identity.

For Jim Messina, who served as the campaign manager for former president Barack Obama's 2012 run, the whole ordeal is a misstep by Warren, as it provides those on the right more fodder to distract from the real issues at the center of the midterms.

"Argue the substance all you want, but why 22 days before a crucial election where we MUST win house and senate to save America, why did [Warren] have to do her announcement now? Why can’t Dems ever stay focused???" he tweeted on Monday.

Echoing that point, co-host Joy Behar said the whole topic was irrelevant. "What's more to the point is: Republicans are threatening health care, the climate," she continued. "It's much more important to not focus on stupid topics like this, and keep your eye on the ball."