Trump is in love with dictators; their “enemies of the people” are his enemies too

Presidents have often borrowed phrases from theorists and other politicians, Trump's inspirations will make you gag 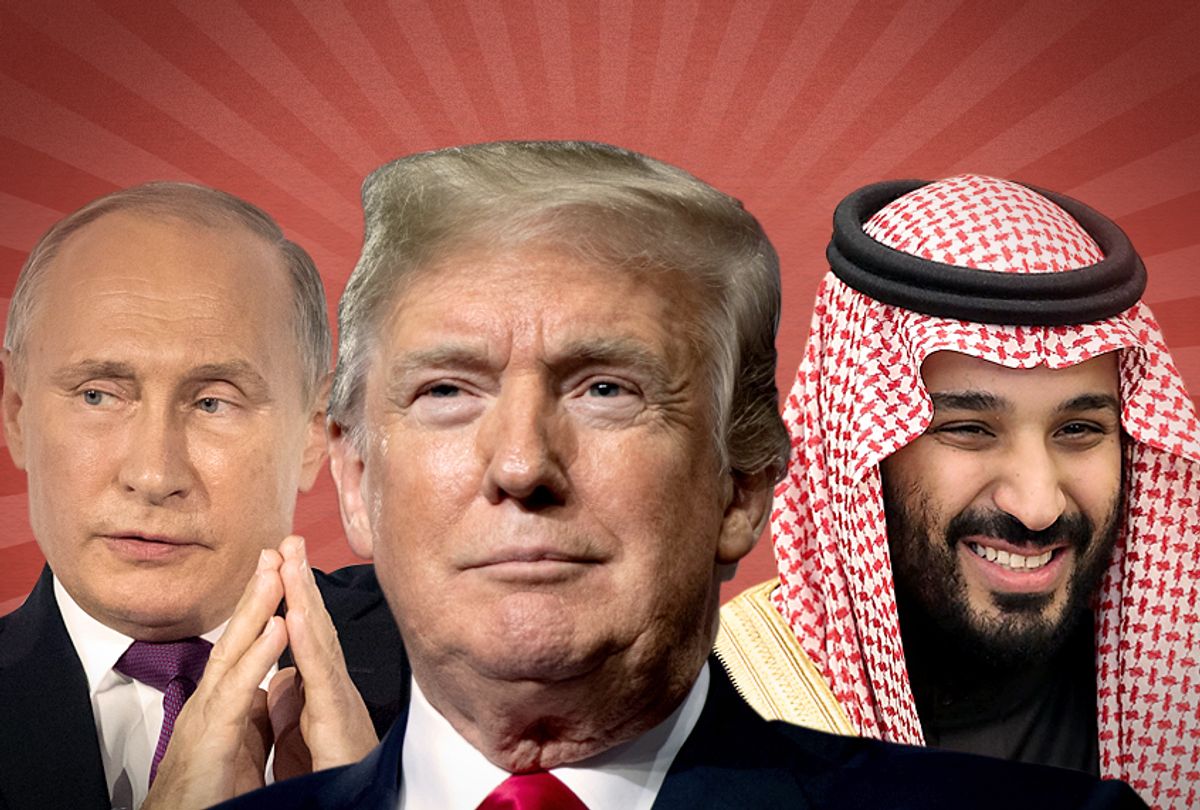 Ronald Reagan’s “shining city on a hill,” was taken from John Winthrop’s address in 1630 just before the first group of Massachusetts Bay colonists set sail from Southampton, England to establish a colony in the new world that became the city of Boston. He charged his fellow Puritans "that we shall be as a city upon a hill — the eyes of all people are upon us." In future campaigns, Barack Obama, Mitt Romney and even Ted Cruz would take up John Winthrop’s challenge as a way of inspiring their followers.

Candidates and presidents have traditionally celebrated the greatness of America and its people, while at the same time reaching out a hand to the rest of the world, pledging loyalty to our allies and issuing a warning to our adversaries. The rhetoric could be soaring and lyrical. “Now the trumpet summons us again,” said Kennedy at his inauguration, “a call to bear the burden of a long twilight struggle, year in and year out, ‘rejoicing in hope, patient in tribulation’ — a struggle against the common enemies of man: tyranny, poverty, disease and war itself.”

But Donald Trump listens to a different trumpet. He set the authoritarian tone for his administration right from the start. Rather than celebrating the greatness of American democracy in his inaugural address, he listed the country’s failings.

“We’ve enriched foreign industry at the expense of American industry; subsidized the armies of other countries while allowing for the very sad depletion of our military; we’ve defended other nation’s borders while refusing to defend our own; we’ve made other countries rich while the wealth, strength, and confidence of our country has disappeared over the horizon.”

“This American carnage stops right here and stops right now,” he cried. “From this moment on, it’s going to be America first.”

Trump shamelessly stole this gem from the notorious “America First Committee,” which was founded in 1940 to oppose American involvement in World War II. The committee was riddled with anti-Semites like Henry Ford, Charles Lindbergh and Avery Brundage, the former chairman of the U.S. Olympic Committee, who in 1936 had barred two Jewish runners from competing in the finals of the 4x100 relay race. The 1936 Olympics were held in Nazi Berlin, with Adolf Hitler frequently in attendance. The America First Committee disbanded three days after the Japanese attack on Pearl Harbor, its dark place in American history nearly forgotten until its resurrection by Donald Trump.

He didn’t stop his authoritarian march there. Only weeks after taking office, Trump began his trumpet call of the media as the so-called “enemy of the people.” He tweeted:

The FAKE NEWS media (failing @nytimes, @NBCNews, @ABC, @CBS, @CNN) is not my enemy, it is the enemy of the American People!

It’s another phrase fraught with an ugly history. Vladimir Lenin first used it in his famous decree of November 28, 1917, telling his victorious revolutionaries, “all leaders of the Constitutional Democratic Party, a party filled with enemies of the people, are hereby to be considered outlaws, and are to be arrested immediately and brought before the revolutionary court.” The phrase was then written into the Soviet criminal code to describe various crimes against the state.

In Nazi Germany, the party tabloid “Der Sturmer” wrote that “Jews are pests and disseminators of diseases. In whatever country they settle and spread themselves out, they produce the same effects as are produced in the human body by germs. . . . In former times sane people and sane leaders made short shrift of enemies of the people. They had them either expelled or killed.”

To be an enemy of the people isn’t good for your health in Vladimir Putin’s Russia, either. Numerous critics of Putin’s regime, including journalists, have been murdered during his rule. Most recently, Putin ordered the poisoning of Sergie and Yulia Skirpal at their home in Salisbury, England, earlier this year. They survived and are now in hiding. Putin denied that Russia had anything to do with the attempted murder, despite the fact that a known Russian nerve agent, Novichok A-234 was used in the attack.

British surveillance cameras caught the two Russian assassins as they entered the country and during their time in Salisbury. Putin put the two on display on the Russian television network RT, denying they were intelligence agents and claiming that their trip was merely to visit the famed Salisbury Cathedral. Smirking at the camera, the two explained that they weren’t able to visit the cathedral because they didn’t bring the right footwear for the snow in Salisbury during their visit. Surveillance footage showed them walking down streets free of snow or precipitation of any kind.

Deny, deny, deny. That’s what dictators do, and Trump copies them right down the line. He was caught on tape by Access Hollywood admitting sexually assaulting women by giving them unwanted kisses and claiming that, “When you’re a star, they let you do it. You can do anything. Grab’em by the pussy. You can do anything.” Later, he denied that he said it. Charged by at least 15 different women with sexual harassment, Trump has flatly denied their claims.

Alabama Senate candidate Roy Moore was charged with sexually harassing multiple underage girls when he was an assistant district attorney in his hometown. "Well, he denies it," Trump said, endorsing Moore in his campaign. “Look, he denies it. If you look at what's really going on, he totally denies it. He says it didn't happen.”

According to Bob Woodward’s book, “Fear,” Trump told a friend facing a claim of sexual harassment, “You’ve got to deny, deny, deny and push back on these women. If you admit to anything and any culpability, then you’re dead.”

Trump has denied climate change, calling it a Chinese conspiracy and a “hoax.” And he loves it when dictators make denials. Told by every American intelligence agency that Russia interfered in the election of 2016, Trump stood next to Russian president Putin last summer in Helsinki and accepted his denials. “I have president Putin, he just said it's not Russia. I will say this. I don't see any reason why it would be,” President Trump said. “I will tell you that President Putin was extremely strong and powerful in his denial today.”

Same with Saudi denials that they had anything to do with the death of Washington Post journalist Jamal Khashoggi, who was seen entering the Saudi embassy in Istanbul and has not been seen since. Trump spoke with Saudi King Salman on Monday and told reporters that the King “firmly denied any knowledge” of what happened to Khashoggi. “It wasn’t like there was a question in his mind. The denial was very strong.”

Jamal Khashoggi was an “enemy of the people” in Saudi Arabia. Russian journalist Anna Politkovskaya was an enemy of the people for Vladimir Putin when she was poisoned aboard an Aeroflot flight in 2004. She survived but was shot in her apartment building two years later.

“A California man was charged Thursday with threatening to shoot and kill Boston Globe journalists, calling them ‘the enemy of the people,’” the Boston Globe reported on August 30, just a month and a half ago.

“Robert Darrell Chain, 68, was arrested at dawn in his home in Encino, Calif., by an FBI SWAT team armed with military-style weapons and what neighbors believe were flash-bang grenades. Authorities said they found 20 firearms in the home, including a semiautomatic rifle purchased in May.” He made his threats in response to the nationwide editorial campaign organized by the Globe denouncing Trump’s attacks on the press, according to the Globe.

How long before it happens here?