Trump says the Saudi royals are as innocent as Brett Kavanaugh 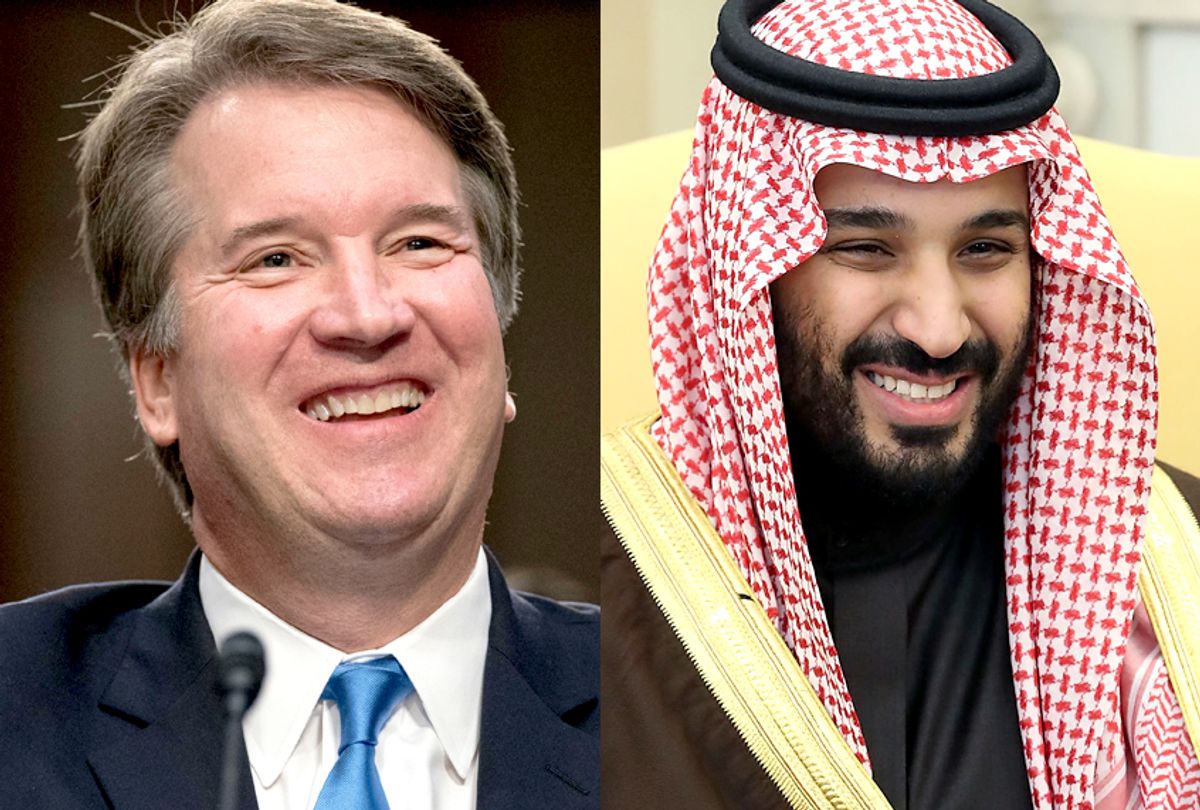 During an interview with the Associated Press on Tuesday, President Donald Trump defended the Saudi royal family from accusations that they ordered the murder of a journalist from The Washington Post by comparing the investigation to the accusations against newly appointed Supreme Court Justice Brett Kavanaugh.

"I spoke to the crown prince, so you have that. He said he and his father knew nothing about it," Trump told the Associated Press when asked about the accusations that they had journalist Jamal Khashoggi killed. "And that was very important. And I spoke to him with Mike Pompeo there. And the crown prince. I spoke to the king yesterday, the crown prince, today wanting to know what was going on, what was happening, and he said very strongly that he and his father knew nothing about it but they are starting a major, they’ve already started a major investigation to find out. And so the answers will be forthcoming."

He later added, "When I spoke to the father, it just sounded to me like he felt like he did not do it. He did not know about it and it sounded like, you know, the concept of rogue killers. But I don’t know. I think the investigation will lead to an answer. And they’re going to do a very thorough investigation. I believe they’re working with Turkey."

The president also expressed disgust with members of the international community who have already condemned the Saudis as guilty, even though Khashoggi's alleged murder occurred in their Turkish consulate. To defend the Saudis, Trump compared the accusations against them to the claims of sexual misconduct made against Trump's Supreme Court nominee, Judge Brett Kavanaugh.

"Here we go again with, you know, you’re guilty until proven innocent. I don’t like that," Trump told the Associated Press. "We just went through that with Justice Kavanaugh. And he was innocent all the way. So I was unconcerned. So we have to find out what happened and they are doing a very major investigation. So is Turkey. Plus, they’re putting themselves together and doing it. And hopefully, they’ll get to an answer as to what happened. But I will say they were very strong in their denial about themselves knowing."

The president also defended his family separation policy and his harsh rhetoric toward the NFL.

Trump bristled at criticisms of his family separation policy, one in which the administration has forcibly separated immigrant children at the US-Mexico border from their parents and inflicted severe trauma on them as a result.

"I think we’ve done an incredible job with children," Trump told the Associated Press. "As I just said, we’ve taken children who have no parents with them standing on the border. We’ve taken many children, and I’m not talking about a small percentage, I’m talking about a very large percentage where they have no people, no parents. In addition to that, we’re separating children who are just met by people that are using them coming into the border, not their parents. They are using them coming into the border."

Trump then used a line of reasoning that has been widely attributed to his adviser Stephen Miller, who has argued that separating children from their parents is a deterrent for immigrants entering the country illegally.

"The one thing I will also say is that when a person thinks they will not be separated, our border becomes overrun with people coming in," Trump told the Associated Press. "So that’s another problem. With all of that being said, we’re getting the laws changed so that catch and release, so that visa lottery, so that chain migration and every other form of incredible stupidity can be taken out of our system."

The president also responded to a question about the NFL's improved ratings by claiming that he had helped the organization during his trade negotiations with Canada.

"I settled that for the NFL. It took me literally about a minute because that’s a small deal compared to the big deal," Trump told the Associated Press. "And Canada knew it was the right thing to do. So I helped a great American corporation. You have to understand, I like the NFL. I want the NFL to do well. I have many friends that are in the NFL, owners and others. I want them to do very well. I also want them standing for the American flag, not kneeling, but I just helped the NFL settle a problem that they couldn’t settle for 15 years or something."