"AHS": Sarah Paulson said making her directorial debut was a "nightmare" — and she’d do it again 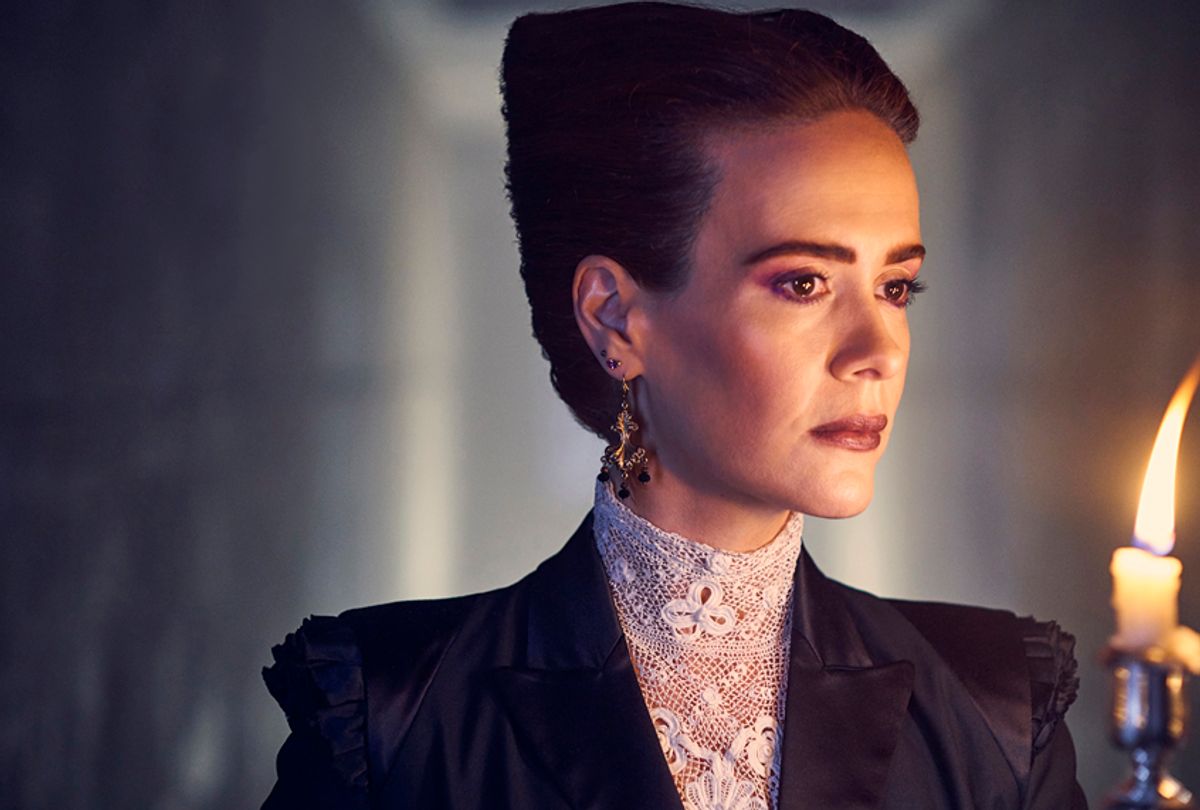 When Sarah Paulson agreed to make her directorial debut on the latest season of “American Horror Story,” creator Ryan Murphy threw her into the deep end. “I remember Ryan calling me,” she said, “and he described it as an episode where everyone’s just going to be sitting around talking, and I was like, ‘Oh great, that’ll probably be easier.’”

But Episode 6, “Return to Murder House,” didn’t quite work out that way. “Cut to the second day I was shooting — I was doing a stunt with blood gags, and hearts being ripped out of chest cavities. I remember calling him up and going, ‘Remember when you told me everyone was just gonna be sitting around? Yeah, no one is sitting around. There’s a guy flying through the air.’”

And while most “Horror Story” episodes have between 28 to 40 scenes, “Return to Murder House” had 72. “I was just like, this is a nightmare. A nightmare,” she said.

Read more IndieWire:‘American Horror Story: Apocalypse’ Review: The End of the World Is a Campy Delight in Ryan Murphy’s Return-to-Form

Paulson rose to the challenge, though, in large part because she didn’t really have much of a choice. She initially had thought she’d direct the eighth episode — until Murphy changed his mind.

“I was driving down the street and I got a phone call from him and he just said, ‘Lady, I’ve decided you’re going to direct Episode 6,’” Paulson said. “And this is when we were shooting, and I’m not kidding you, Episode 5. And I was like, ‘Wait, what?’ I thought I had a month — a full month, so I could back out.”

Instead, Paulson had to get ready while shooting Episode 5. “All of my prep work was happening during big turnarounds and setups on set. I would sort of go off with my first AD and we’d talk about when I might need a Technocrane, whether I wanted an Oculus head. If I wanted to be able to rotate it all the way. Whether I needed a diopter for what I was planning. And so it was just a lot of catch-as-catch-can,” she said.

However, she acknowledged that, in the long run,  the shortened timeframe might have been an advantage. “Sometimes my brain can really get in my way both as an actor and as a human being, and my head can talk me out of things I should be doing. So it was probably really, really beneficial for me to not have too much time to think about it. I was driving, I was making a left turn. I was like, ‘Yeah, OK. Yeah, I guess. OK.’ You know, what was I going to say to him? I’ve never said no to Ryan Murphy, and that’s the truth.”

Paulson said she always knew that, if she was going to take a stab at directing, she wanted to do it on “American Horror Story.” “This feels like my family, and my house, and that I would probably feel the most support if I started doing it here. If I didn’t know things, which is a lot, I would feel comfortable turning to my left or my right and with this crew and this company that I’ve been working with for so long, and know that I would have non-judgmental advocates.”

Among those supporters were Dylan McDermott, Connie Britton, Jessica Lange, and other “Horror Story” favorites who were blended into the “Return to Murder House” narrative.

Paulson said a long-standing connection made directing Lange especially exciting. “I acted with her for the first time when I was 29 years old in ‘The Glass Menagerie’ on Broadway, so she’s the person I’ve acted with the most in my career,” she said. “I do know that makes me one of the luckier people on the planet from an acting standpoint, but to be wearing a different hat and to have her be so receptive and so open and so interested in what I have to say, or what my thoughts were about the scene, and how to approach something was incredibly fortifying and relaxing at the same time, and everyone was that way across the board.”

You know how this person is v v good at acting? Now add directing to the list ✅

“Anytime you’re in Ben’s office, Dylan McDermott’s office, you always see the ceiling in that office,” she said. “The camera’s always on the floor. Whenever you’re in the kitchen, it’s usually the opposite. And so there were certain rules that were already laid out for me, that I knew would help to make the audience more comfortable, and know that they were back in Murder House the minute they saw certain images.”

In the episode, Paulson appears as psychic Billie Dean Howard, one of her three characters from the season, and she occasionally found herself having to direct herself and other actors in the character’s full wig, pantyhose, and press-on nails. “I would just stand there and wait until my cue, and then carefully put the headphones down and step into the scene,” she said. “It was like patting your head and rubbing your stomach while running and making scrambled eggs.”

Would she do it again? Sort of. “I would probably not put myself in that position, should I ever be lucky enough to do this again,” she said. “I don’t think I’d ever try to direct myself.”

Read more IndieWire: TV Is Bloodier Than Ever, but the Best Shows Don’t Need Gore to Leave a Mark

A little more preparation would be nice as well. “I just had to sort of put both feet on the ground and just keep walking forward. It was terrifying.”

Still, she relished the experience. “It’s all about learning how to use the camera to evoke emotion, or discomfort. It doesn’t have to be a positive emotion — it can be any kind of emotion. Being an actor, that’s my favorite part of what I do, is diving deep into my own emotional life and figuring out what I can use here and what I can’t. To be able to use a camera to communicate a feeling to an audience, no matter what that feeling is, is an incredibly exciting thing.”