Fighting for gender justice isn't just women's work, as many men are starting to realize 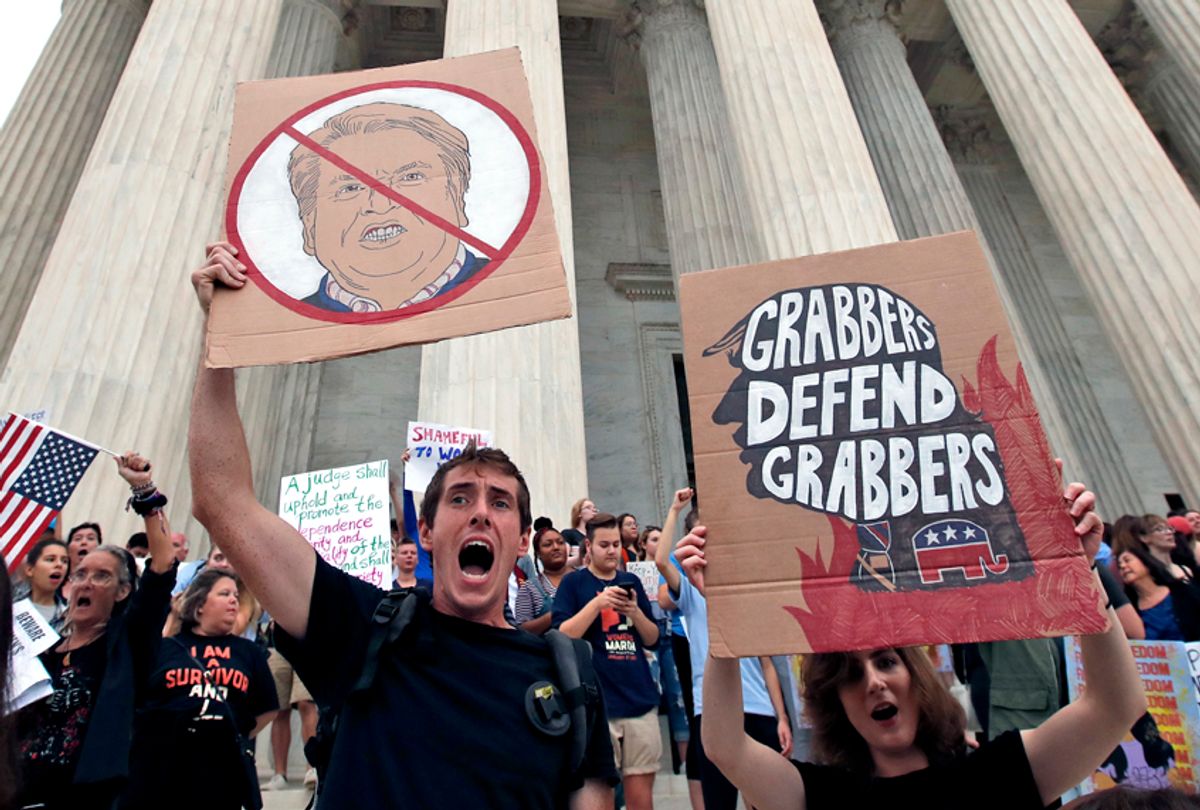 People protest on the steps of the Supreme Court after the confirmation vote of Supreme Court nominee Brett Kavanaugh, on Capitol Hill, Oct. 6, 2018 in Washington. (AP/Alex Brandon)
--

The Senate confirmation of Brett Kavanaugh is a defeat. The impact, though, is an incredible victory for women and all men who believe in the absolute right of women to live free of men’s violence. It is pure fuel that is igniting soul-searching, activism, outrage and change. It is part of a singular period that includes the massive 2017 women’s marches and the #MeToo movement, a period which, when we look back, will be seen as the fulcrum that propelled the fifty-year old gender equality revolution towards victory.

The key to this revolution is the ongoing leadership, strength, tenacity and sheer courage of women — exemplified in this particular instance by Christine Blasey Ford. Women organizing in their communities, speaking out in their workplaces and classrooms, redefining their lives, ambitions and relationships, pressing for institutional change and challenging the men and boys around them. Fifty years ago a few hundred, a few thousand, women around the world took on Goliath and now, as their ranks have swollen to hundreds of millions, the giant’s hair has been cut. Yes, he still flails around with menace and impact, but we are watching the colossus of patriarchy tumble to the ground — far too slowly, it often seems, but set against the 10,000-year sweep of male-dominated societies, such dramatic change within a few generations is stunning. This revolution is fueled by the increasing impact of those women on the lives, attitudes, and behaviors of men and boys. We overlook this change at our peril.

Although there are indeed real gaps between a belief by men in gender equality and changes in our own practices, I believe we have crossed the point in many parts of the world where a majority of men support women’s rights. They don’t usually call themselves feminists, but asked if women should be equally paid, have equal representation in leadership bodies, equal access to education and health care around the world, live free of the many forms of gender-based violence, have control over their own bodies, and (for all parents) have access to parental leave and quality and affordable childcare, great numbers of men are saying yes.

Why is this happening and what is the responsibility of men within the gender equality revolution?

Men are supporting gender equality, ultimately, because of the challenge to men in our relationships, workplaces, and at the ballot box. It’s happening because of changes in the economy, the traditional family wage where a male earner could adequately support a family is a thing of the past; even if they didn’t want to, it is essential for women to be pursuing jobs and careers outside the home. Two generations of boys have now grown up seeing girls as their equals or superiors in the classroom. Many men want nothing less than equality and safety for the girls and women in their lives, and deeply believe in equal human rights for all. And it’s happening because an increasing number of men are angry and appalled by the verbal, physical and sexual abuse of women that some men feel is still their right — whether in the bedroom or a Senate committee room.

It is also happening, paradoxically, because more men are discovering the price we pay for the ways we have constructed men’s power and privilege. The tight armor of manhood simply doesn’t fit most of us, although it has long given us a leg up in the world. And so, for example, we’re seeing a seismic change in men’s aspirations as fathers—yes, pushed first by women, but now enthusiastically embraced by men who don’t want to “help out” or “babysit” but to participate fully and equally as caregivers.

In other words, men’s embrace of gender equality is because many men are discovering that the end of patriarchy and all that goes with it will mean not simply that men will lose out but have much to gain.

And so the time has come for men to take action in our own lives. This requires listening to the voices and concerns of women. It means speaking out for women’s rights and challenging abusive words and behavior in our lunchrooms, boardrooms, and locker rooms. It means supporting policies and laws that help build the institutional edifice of gender justice and properly funding women’s programs and workplace training on issues such as sexual harassment. It means voting for candidates who clearly, unequivocally and forcefully support women’s rights. It means looking thoughtfully into our own attitudes and behaviors. It means changing how we raise boys to be men.

So, we weather this moment of a sham FBI investigation, of an abusive man getting his way once again, and of the support he got from the men and women who form the Senate chapter of the male protection racket.

We weather it because we know the giant is tumbling down and we, women and a growing number of men, are making it happen.

Michael Kaufman’s next book is "The Time Has Come: Why Men Must Join the Gender Equality Revolution" (Counterpoint Press, January 2019).