Here's why media coverage of indigenous issues is so terrible, both in the U.S. and Canada

Mainstream media in North America continues to cover indigenous peoples only sporadically, and based on stereotypes 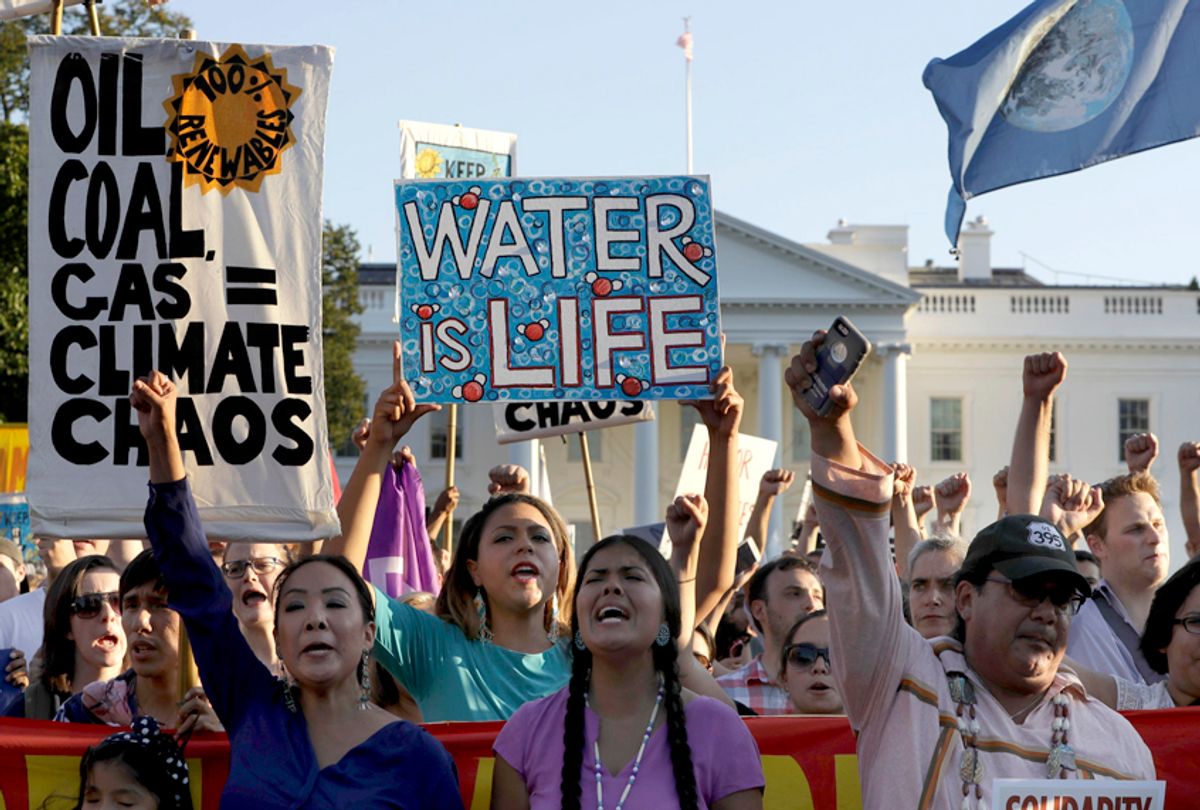 Supporters of the Standing Rock Sioux Tribe rally in opposition of the Dakota Access oil pipeline in front of the White House, Tuesday, Sept. 13, 2016. (AP/Jacquelyn Martin)
--

This article originally appeared at . Used by permission.

Long ago and far, far away, in a Canadian prairie city and a prior life as a local and regional reporter for TV news, I wondered why we covered indigenous issues so badly. I presented this question to reporters, editors and producers in print and broadcast newsrooms, including my own, throughout the city. This in a city where roughly one-quarter of the local population was indigenous, living literally on the other side of the tracks.

Not a single person I interviewed argued against my premise. Everyone agreed our coverage was “lousy,” and got worse throughout the province, the further away from the city you were. Most gave me the usual excuses: We didn’t have enough time or people to do better, given tight deadlines; didn’t have adequate resources or people, given tighter budgets; and we worried about accusations of racism if we did a story about the problems, and accusations about racism if we painted over the problems.

One producer in TV news said something different. She didn’t agree with what she called easy excuses. She said it was about money — advertising. Poor people in poor neighborhoods didn’t buy advertising, as a rule. Indigenous peoples, often the poorest of the poor, not only didn’t buy ads, but didn’t pay attention to ads or buy newspapers, a major source of stories and ideas for local broadcasting newsrooms. To her, indigenous peoples got the coverage they paid for: no money, no coverage.

Put simply — we weren’t considered part of the audience or readership.

Most journalists also said we didn’t bother to cover indigenous peoples because there was no journalistic payoff. We, reporters, preferred to do stories to improve situations and conditions, by pointing out things that didn’t work properly. We looked for bad guys, stories about corruption or inept business owners, government administrators, politicians, cops, for example. Yet similar stories about indigenous communities never went anywhere. Things never changed. Also, by telling these stories, we faced accusations of concentrating on the negative. (See comment above about racism.) 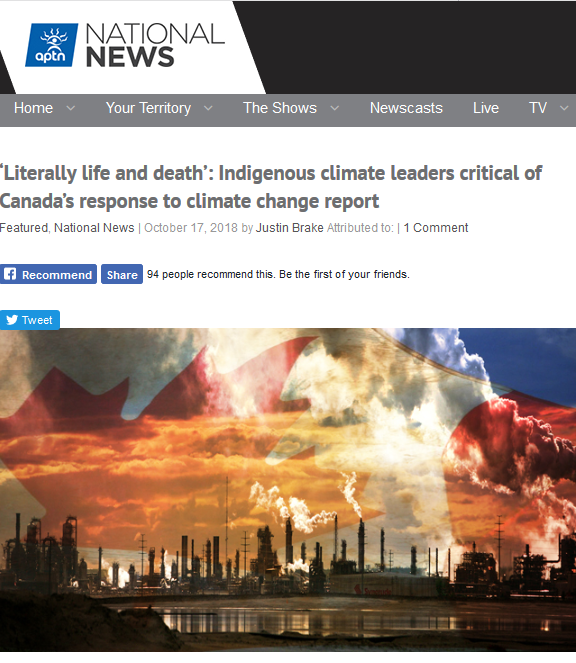 In my opinion, things haven’t changed much in the last 25 years in Canadian print and broadcasting, with the exception of APTN News, now in its 18th year of broadcasting a national newscast by, for and about Indigenous peoples. CBC News, to its credit, has played catchup, creating its own unit called CBC Indigenous. There are a handful of reporters and opinionators at other major news organizations, print and broadcasting, with a working or better knowledge about Indigenous peoples, histories, politics and lives. Notable is Doug Cuthand, a Cree and a columnist at the Saskatoon Star Phoenix.

Otherwise most journalists continue to rely on old stereotypes and stubborn prejudices, and on superficial and erroneous stories, as they helicopter into and out of “Indian Country” to report on complicated issues. Take the mainstream media’s coverage of the TransMountain oil pipeline in Western Canada and the Keystone XL and Dakota Access pipelines through the United States. The legacy media covered these stories in one of two ways: as protests against oil pipelines, citing damage to health of people and the ecology; or as paramilitary and police forces used by governments to suppress peaceful protest. Basically, good guys vs. bad guys, depending on your point of view, with the spirit of “cowboys fighting Indians” the underlying narrative. True, but nowhere near the whole and much better story.

In both Canada and the United States, anti-pipeline protests galvanized indigenous activists, creating broad alliances with non-indigenous activists and turning scattered voices into emerging political movements. For example, Idle No More, often described by the mainstream media as a fading social media phenom, found traction with people fed up with the inaction or lack of support from Indigenous politicians over the Standing Rock, North Dakota, protests. There were plenty of pious promises from indigenous politicians, but the only real action came from grassroots activists putting their bodies out there. Similar frustration with the established orders in “Indian Country” on both sides of the Canada/U.S. border is leading to calls for change from a younger generation of indigenous peoples, asking their political representatives for more push for their rights and less give to government demands. 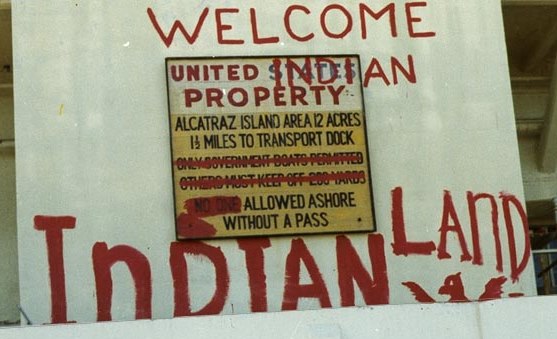 That was the story most journalists missed, in some cases because the story handed to them limited the historical scope of what was at stake in anti-pipeline protests. The Oceti Sakowin Camp was billed and billed itself as “a first-of-its-kind historic gathering of Indigenous Nations.” But real historic memory would show it was only the latest broad political alliance going back to the occupation of Alcatraz in 1969; the “Trail of Broken Treaties Caravan” to Washington in 1973; and the occupation of Wounded Knee, also in 1973, by the American Indian Movement.

“The Alcatraz occupation is recognized today as one of the most important events in contemporary Native American history,” according to the U.S. National Park Service:

It was the first intertribal protest action to focus the nation’s attention on the situation of native peoples in the United States. Because of the attention brought to the plight of the American Indian communities … federal laws were created which demonstrated new respect for aboriginal land rights and for the freedom of American Indians to maintain their traditional cultures.

In Canada, the 78-day Oka Crisis at Kanehsatake Mohawk Territory, Quebec, in 1990 grabbed national and international news interest. Canadians were shocked from complacency as Mohawks set up barricades and governments ordered more of the military than it would later send to the first Gulf War, to corral 40 men women and children — all over the expansion of a whites-only golf course from nine to 18 holes. The Oka Crisis is often credited with sparking an awakening of indigenous activism across Canada, and a series of developments from commissions of inquiry to the creation of the United Nations Declaration on the Rights of Indigenous Peoples.

Most reporters at major news networks and newspapers didn’t see those historical threads, because it’s never been part of their journalistic DNA. They were never taught about these events, social and political developments in their history or poli-sci classes. Those courses didn’t exist until relatively recently as Native or Indigenous Issues at a few colleges and universities. Even if the courses were available, journalists were unlikely enroll in them, as the courses didn’t increase their chances for a job or advance their career in a newsroom.

In my humble opinion, the alternative and Indigenous news media did better covering these Indigenous stories. Vox, Vice, APTN and Mother Jones understood better the significance of these stories to indigenous nations, communities and peoples, because they accepted the need to see stories through their eyes. These are the missing pieces in the puzzles presented to both U.S. and Canadian audiences by the legacy media. Indigenous perspectives, plural because there are many, have always been missing to our understanding, whether it’s about pipelines, land rights, racism or music.

Things are changing, if slowly, thanks to Royal Commissions, justice inquiries, the Truth and Reconciliation Commission Report, and — yes — thanks to more and better media coverage. There’s greater interest, a genuine hunger by the audiences and readerships to know more about indigenous peoples than ever. There’s a greater understanding that we need the missing pieces in this puzzle called us. There are more stories asking the right questions. More indigenous and people of color journalists telling their own stories. Better trained and informed non-indigenous reporters graduating J-schools and entering newsrooms than ever.

Dan David is Kanienke:haka (Mohawk) and an award-winning journalist and fiction writer. He is based at Kanehsatake Territory in southern Quebec.