"Some folks believe blockchain will save the universe": Inside Alex Winter's "Trust Machine"

Salon talks to the filmmaker about "Trust Machine," his latest documentary exploration of transformative technology 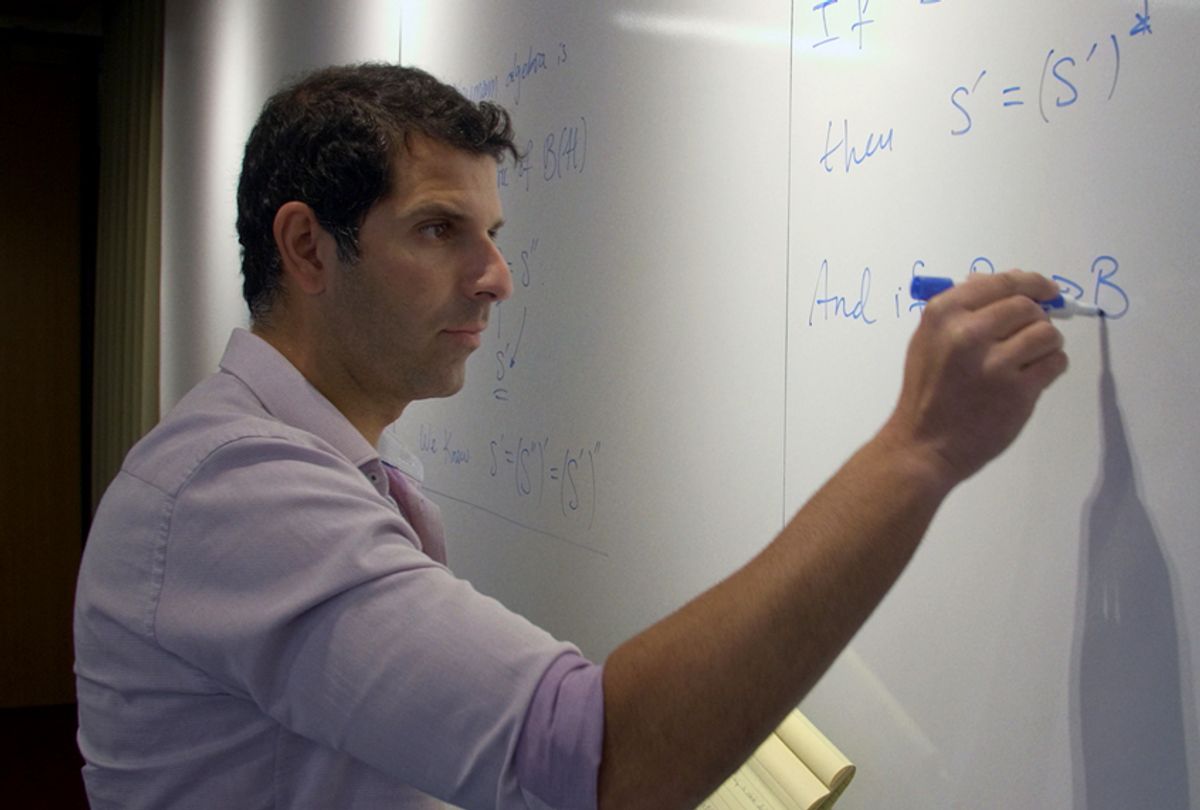 Alex Winter may be best known for playing the no-so-bright teenager, Bill, in “Bill & Ted’s Excellent Adventure” almost 30 years ago. But the former actor has reinvented himself as a filmmaker who directs technology documentaries such as “Downloaded,” (2013) and “Deep Web” (2015). His latest film, “Trust Machine: The Story of Blockchain,” is a heady, globe-spanning investigation of “the decentralized technology that supports cryptocurrency,” created by Satoshi Nakamoto, a suspected pseudonym.

Narrated by Rosario Dawson, this dense, intense film explains how blockchain technology is the “flux capacitor” in the world of bitcoin. This decentralized accounting system records all transactions and creates an electronic ledger that is encrypted and incorruptible; the model provides airtight security. Cheating or hacking the system is impossible because the information is broken out into different blocks that are individually linked. “Trust Machine” likens the process of undoing a transaction to “reversing smoke” and Winter provides a nifty visual in the film to express this.

“Trust Machine” shows how some folks think blockchain technology is the future when it comes to cryptocurrency. It could potentially make banks—which are, in effect, “cloud storage for your money”—obsolete. Of course, there are those who suspect bitcoin and blockchain is all a big fraud—a Ponzi scheme or a bubble waiting to burst. And time will tell who is correct and to what extent.

Meanwhile, “Trust Machine” shows folks around the world “mining” virtual currency, (though it’s not entirely clear how value is created and generated), as well as the benefits blockchain has for individuals struggling in third world economies. Winter also looks at other examples from how musician Imogen Heap wants to employ the technology, to privacy issues around “hacktivist” Lauri Love’s extradition case for stealing data from U.S. Government computers. Winter links all these stories and more in “Trust Machine.”

The filmmaker recently spoke with Salon about his documentary and blockchain.

You film is a primer for blockchain, bitcoin, cryptocurrency mining and more. These things can confuse the uninformed. How did you approach these topics?

That’s who we made the movie for. We hope people will dig in and take a deeper look.

I would never try to concisely explain this technology because I would lie. There is a Google Doc analogy for blockchain that is not accurate. My point is these technologies are really complicated; they are not easily or quickly digestible. If you care how blockchain or bitcoin works, it is legitimately complex. You have to research end-to-end encryption, and I wanted to tell a broader story about a site for decentralization.

Can you explain how you create something of value from cryptocurrency and mining? I suspect understanding comes from “following the money.” How much value does this have?

I’m not a coder or programmer, but look at Coindesk’s article “What is Bitcoin?” These powered graphic cards are hammering away at the blockchain and verifying a transaction, when they are verified, they are rewarded with a fraction of the currency—bitcoin, ethereum, NEO, etc. If your computer succeeds in creating the code that verifies a transaction, your computer is rewarded with a fraction of that currency. That creates value, but that value fluctuates. In the beginning it was worth a fraction of a dollar, then more, and the miners in 2012 got rich because they were able to exchange for actual fiat currency, and then were able to buy things with Bitcoin. But predominantly it’s an exchange of currency (e.g., for U.S. dollars) to cash out. The value of that currency is based upon its trading value. The more Bitcoin is being used for micro-exchanges or as Western Union in underdeveloped countries, it creates value.

Do you think blockchain will upend centralized power on the internet, or does this require too much “trust” from folks who are reluctant to concede power? Governments, no doubt, will be aggressively defensive; the CFAA [Computer Fraud and Abuse Act] would also be very active in preventing this, yes?

My opinion doesn’t matter and frankly, it changes. I don’t know everything. I’m not a cryptographer. But as a relative outsider with an invested interest in this space, I had my thesis said by folks in the film who had the same impression I did. One likely scenario is that blockchain-type technology will find its way to create fundamental changes, but it will be under the hood, much like https, which drives the web. That’s not something you think about—like encryption with online banking. The changes are going to be radical. Is there going to be a blockchain revolution that decentralizes power and governments? I don’t see that happening in a revolutionary way. If it happens, it will be slow with technological systems being adopted. Some will be blunt and disruptive like Uber, and some will be slow through government changes. I don’t see a revolution imminent that will compensate artists, or mirror banks and governments. Too much of that is based on greed and power dynamics that aren’t going to change overnight.

Can you talk about how you secured the experts and assembled the footage for “Trust Machine”?

The story I wanted to tell—because this moment is so frenzied, and I was very active in the first internet bubble; my film “Downloaded” was about Napster—I wanted to be broader and focus on the cryptocurrency blockchain moment we are currently in. Bitcoin climbed to a height while we were in production and then it popped, but it was the largest rise and fall to date of cryptocurrency, so I wanted the film to have a somewhat frenzied tone and pace and a slight feeling of disorientation. But I counteracted confusing the audience by having practical case studies.

Lauri Love is a modern-day John Gilmore, a cyberpunk activist, who is young and politically aggressive, idealistic, and technically savvy. I wanted to follow the people in the UN food program. Bill Tai [a venture capitalist] explaining stuff was great. With Imogen Heap, I wanted to cover what we did in “Downloaded”—that Sean [Parker]’s vision of Napster is what Imogen wants to do today: create a world satisfying for consumer and artists to trade/buy music. That was the constellation. The intention isn’t to get you to understand every nuance as much as their investment in this world and their own story. Someone like Tim Draper, or Mark Jeffrey, who struggled to get this ICO [Initial Coin Offering] going. I wanted to dip in and out of these narratives.

I like the case studies you provide in “Trust Machine,” from Kenyans who create an income in a struggling economy, to global refugees who are described as “unbankable” because they don’t have paperwork, to Venezuelans who are combating skyrocketing inflation to humanitarian aid in Jordan and beyond. So first, if folks are reluctant to adapt blockchain, how can these positive examples exist? And second, why do folks feel this is a kind of gamble? What is the risk?

What we are experiencing right now is very similar to internet bust of 1999. There was cultural exhaustion. Everyone had a dotcom and a lot of people pushed back and said the Internet was a scam and things were going to crash or were hoaxes or wouldn’t have the impact on the world that everyone claimed. And to a certain degree that was true. MySpace imploded and went away. No one is connecting with the AOL disk anymore. But on the other hand, Jeff Bezos was claiming in 1999 that he was going to upend brick and mortar bookstores, so you can start there to the cultural response to phenomena and what is and isn’t going to survive. Same is true of blockchain. It’s a process, not a thing. It’s not rocket science to wrap your head around how this can be utilized.

Naysayers have two groups: One says all of it is BS, and a scam, and a fraud; and then a slightly more nuanced group says a lot of it is scams, but the verifiable ledgers and lists are a natural evolution of the internet. Cryptography has been co-opted into blockchain technology and yet it’s been around for a long time before you had cryptocurrency. Some folks believe blockchain will save the universe. There’s a disgruntlement in the computer science community. I don’t agree with the group that thinks it's bullshit. They are uneducated.

There’s a great meme: Crypto is only short for cryptography; or Crypto=cryptography — that’s a nose-thumbing from the computer science community saying you can’t co-opt our term for your movement. I tried to draw the connection between cryptography and cryptocurrency because there is one.

Do you think blockchain is here to stay? What needs to be done to make that happen? And is it a good thing? Your film is sympathetic, but nonjudgmental.

I have sympathy for all sides—of good—because why not try to reach for the stars and take a nascent technology and make something of it? It’s admirable. It may not hold, but it may give rise to other uses that are beneficial.

It’s come so fast, and changes are so formidable, and the power has so much to gain and technology is so bewildering. People go along with these monopolies without stopping to think of their motives. You can fault Facebook for the latest breach—and you should—but they are our company. In the book “Rich Dad Poor Dad,” there is an example that McDonalds is about real estate: the goal is to put as many franchises on as many corners as possible. It’s not a business model to serve a quality burger. Facebook is harvesting you to create an enticing community, not a kumbaya for reuniting with your high school friends. It’s not a surprise to learn that we are being harvested. The more they harvest, the more they are servicing their shareholders. Many people don’t care—or they are overwhelmed by it.