#TransRightsAreHumanRights and #TransIsBeautiful also became viral hashtags over the weekend 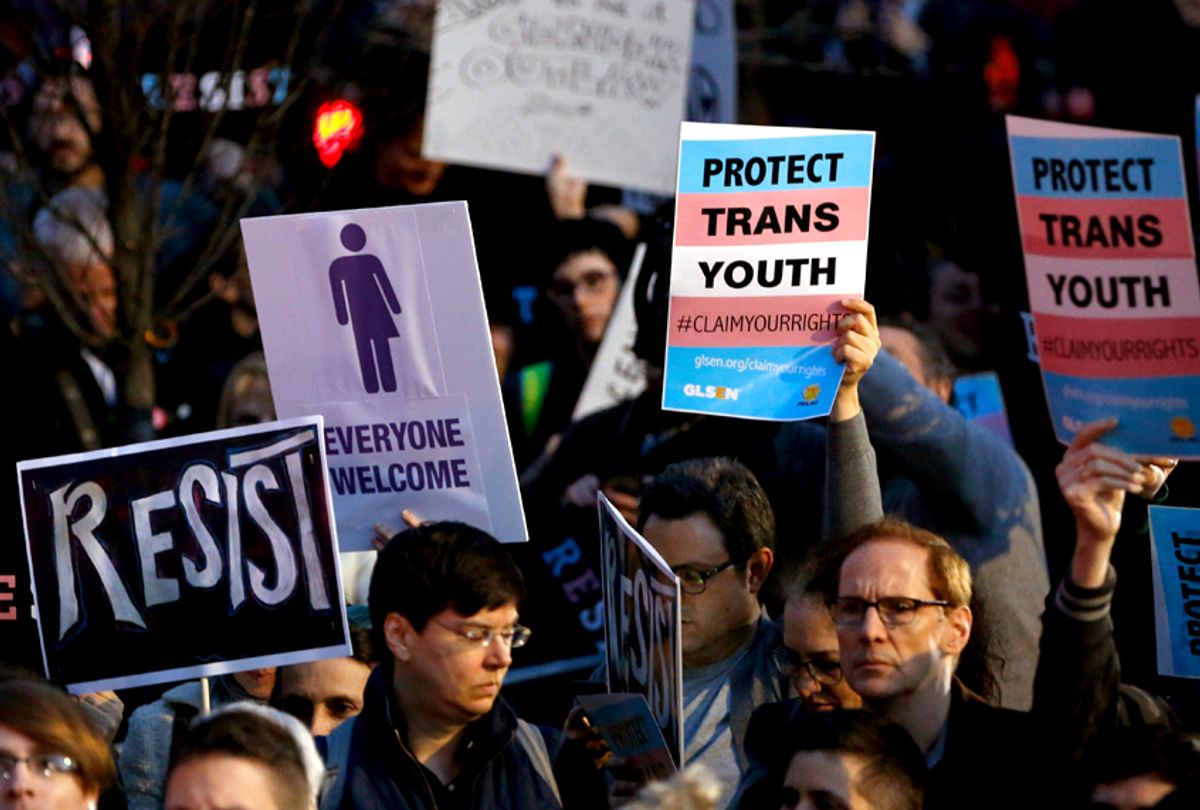 Protesters hold signs at a rally in support of transgender youth, Thursday, Feb. 23, 2017, at the Stonewall National Monument in New York. (AP/Kathy Willens)
--

The hashtag #WontBeErased became a rallying cry on social media for the trans community over the weekend after the New York Times published a report that claimed the Trump administration is considering defining gender as biological and unchangeable, determined by genitalia at birth. With 1.4 million people in the U.S. who identify as transgender, this new definition would strip them of federal recognition.

Others used  #TransRightsAreHumanRights and #TransIsBeautiful to protest the Trump administration's reported move:

In addition to the hashtag, protestors gathered in Washington Square Park in New York City Sunday night. A rally in Washington, D.C. will take place on Monday in front of the White House.

"You saw such a massive response because this attack on the trans community is essentially trying to erase the trans community from the face of this country and we're not going to stand for that," Sarah Kate Ellis, president and chief executive of GLAAD, told the Times.

"Once again this administration is attempting to strip transgender and gender-nonconforming people of their identities and rights," Debra Hauser, President at Advocates for Youth, said in a statement. "This egregious attack on civil liberties is a step backward for this country and a decision that will endanger the lives of the almost 1.5 million people in this country that do not identify with the gender they were assigned at birth, including many trans young people who are particularly vulnerable to attacks. This regressive and unscientific definition of gender is another attempt by Trump to roll back Title IX protections that prevent discrimination against transgender people and takes a step further to deny their existence entirely."

Under the Obama administration, gender in federal programs became recognized as an individual's choice and not assigned by a person's biology at birth. But now, the Department of Health and Human Services is reportedly seeking to change that, by leading an effort to narrowly define sex under Title IX, the federal civil rights law that bars gender discrimination in education programs receiving government funding, according to a memo obtained by the Times. The new legal definition would limit sex as either male or female, and immutable, with disputes clarified by genetic testing.

The National Center for Transgender Equality said in a statement: "This proposal is an attempt to put heartless restraints on the lives of 2 million people, effectively abandoning our right to equal access to health care, to housing, to education, or to fair treatment under the law. This administration is willing to disregard the established medical and legal view of our rights and ourselves to solidify an archaic, dogmatic, and frightening view of the world."