Barack Obama on 2018 midterm elections: "We have a chance to restore some sanity in our politics"

"There's only one check on bad policy, and that is you and your vote," Obama told voters at a rally in Nevada 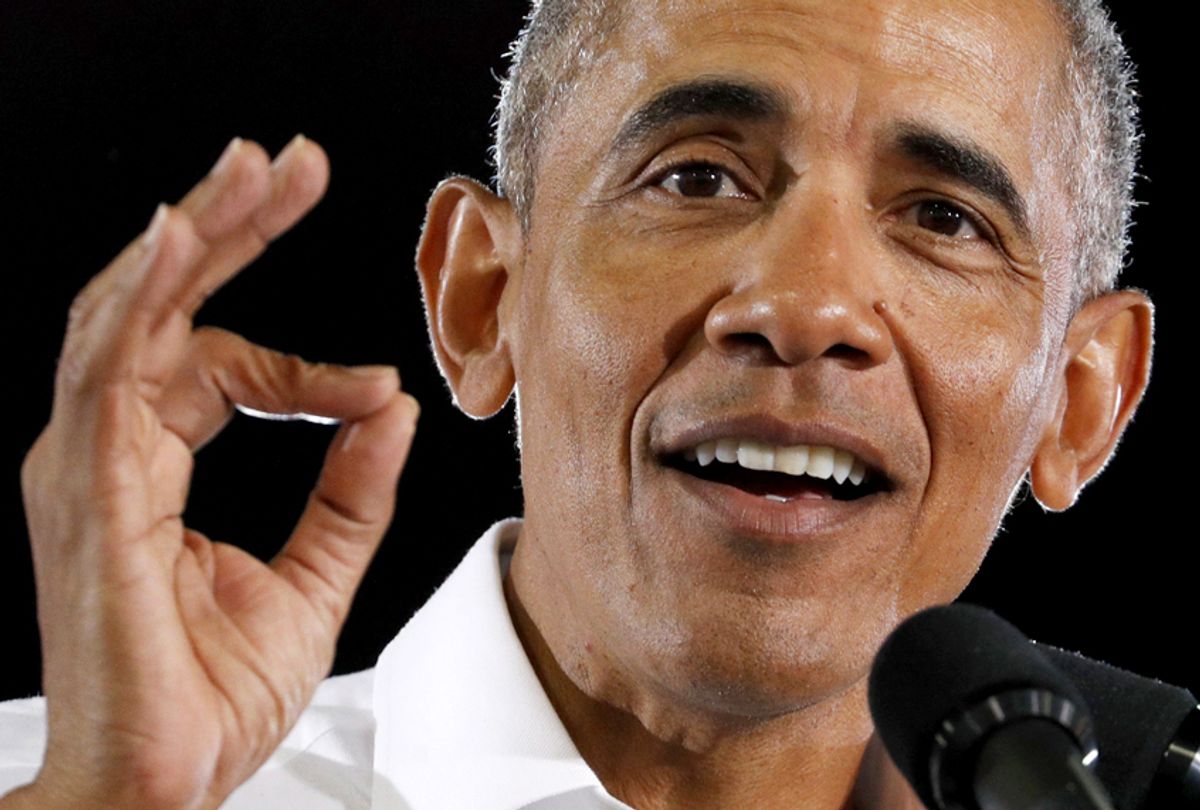 Former President Barack Obama delivered a scathing assessment of Republicans in Washington and President Donald Trump's administration on Monday, although he never called out his successor by name.

Speaking at a rally in Las Vegas for Nevada Democrats, Obama said that Republicans had promised to "fight for the little guy" and instead undermined "institutions essential to our democracy" by cutting a hole in the federal budget through passing tax cuts that disproportionately benefited wealthy Americans.

Republicans, Obama said, handed out $1.5 trillion in tax cuts "for folks who are already sitting pretty." They "don't even try to pay for it," the former president added.

The former president advised the audience to "remember who started" the current economic boom that Republicans have been bragging about to voters ahead of the November elections, noting that Democrats had to deal with one of the "worst economic crisis of our lifetimes" upon Obama's election 10 years ago when the Republican Party ran "things into the ground."

Obama also criticized some of Trump's most controversial rhetoric and policies on issues including health care, immigration and the federal deficit. He took issue with Republicans who have been promising voters that they would protect patients with pre-existing conditions after previously threatening to kill those protections and the Affordable Care Act, also known as Obamacare.

"I know you can bet on anything here in Vegas," Obama said. "But you don't want to bet that Republicans are actually going to protect your health care."

Obama was in Nevada to crank up enthusiasm for Democratic Rep. Jacky Rosen, who is competing in a tight race against incumbent Republican Sen. Dean Heller, and to energize voters in the swing state that delivered big for Democrats in 2016 but faltered in the midterm elections in 2014. Rosen, a congressional newcomer, is seen as one of Democrats' best options to flip a Senate seat, although the party faces slim chances of flipping control of the upper chamber.

Obama's appearance followed the beginning of early voting in the Silver State. Several key counties reported record-breaking turnout over the weekend — a good sign for Democrats and their efforts to capture an open gubernatorial seat and unseat Heller.

Obama also warned Nevadans that staying home during the midterm elections this November "would be profoundly dangerous to this country, to our democracy," declaring in his speech that this election is "more important than any I can remember in my lifetime, and that includes when I was on the ballot."

"We have a chance to restore some sanity in our politics," Obama said. "Ultimately, there is only one real check on abuses of power. There's only one check on bad policy, and that is you and your vote."

"Don't boo. Don't hashtag. All that stuff is nice to do," the former president added. "Just vote!"

Obama alluded to Trump's racially-charged language, as well as the divisive rhetoric that some Republicans have been using across the country to sow divisions in an attempt to save their congressional majorities amid talk of a proverbial blue wave that is supposedly coming to push Congress toward a Democratic majority this November.

"Republicans right now are trying to say, 'Democrats don't think like you, look like you, or believe in the same things as you,'" he said. "We've seen that playbook before." He reminded Nevadans that they have the power to change Capitol Hill, adding that "one election won't fix everything. But it's a start."

"If we can't find a way to activate the largest and fastest demographic in this country," said Ferrera, who was born to Honduran parents. "There’s no way we can take our country back."