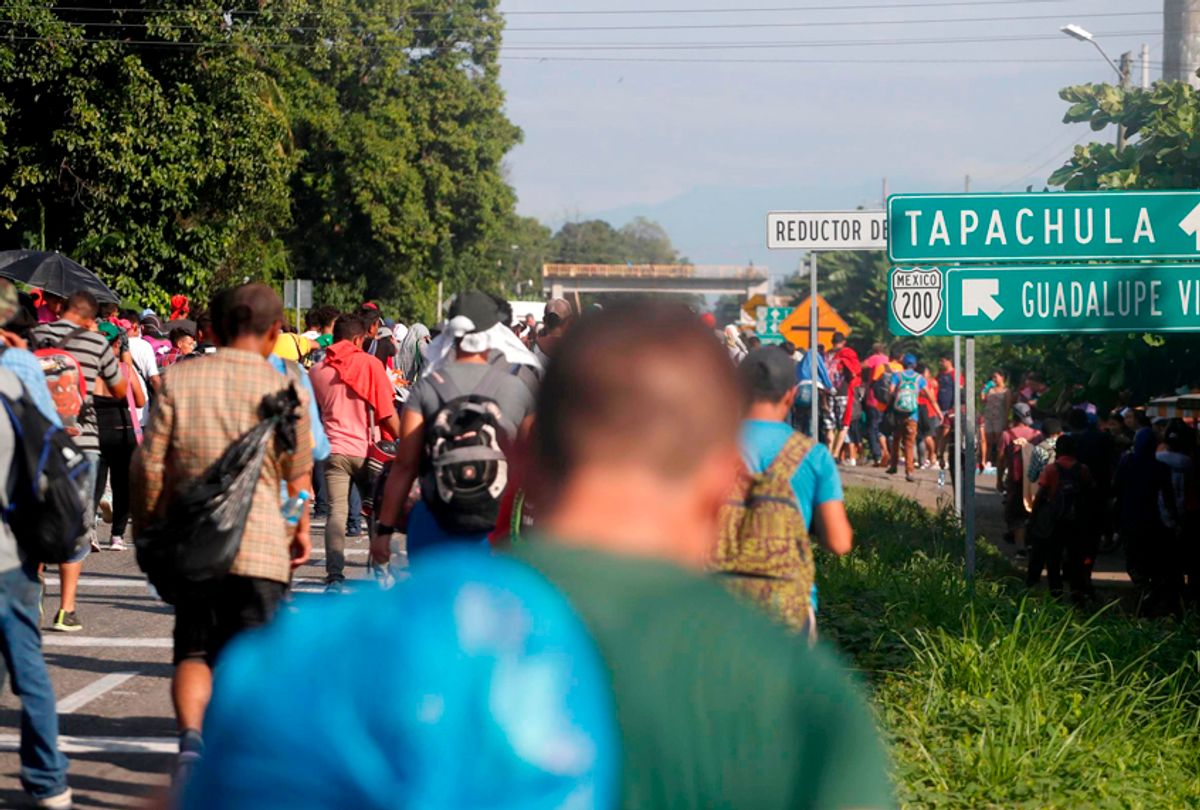 “Fox & Friends” took a strange turn in its immigration coverage on Tuesday morning, when the show's hosts documented a migrant family from Central America crossing the U.S. border in McAllen, Texas.

The reporter, Griff Jenkins, can be seen hiding in the bushes waiting to deter a family from crossing. “We laid in the bushes to wait,” Jenkins told viewers, “and we busted one of those smuggling operations.”

A family can be seen boarding a raft to cross the Rio Grande, and Jenkins awkwardly calls out after them: “Excuse me, sir, were you trying to cross into America illegally?” This causes the family to head in another direction. Jenkins continues, “We’re witnessing a family being brought over by a smuggler. This is an attempt to illegally cross. We seemed to have foiled this attempt, but officials tell us he’s probably just looking for another spot.”

However, the segment does not stop there. Jenkins then follows the family – whose images have been blurred on the screen – and confronts them about their reasons for immigrating.

“You know this is an illegal crossing? And you came anyway? Why did you come, is what I’m asking you? Can you tell me why you came illegally?”

The unnamed woman can be heard saying, “The situation in Honduras. You cannot have work in there because the criminals will always get your money.”

Jenkins ends the segment by emphasizing that not only women and children cross the border, but also criminals, citing the case of a man arrested in South Carolina for murder charges in his home country.

“Your heart goes out to them, and there is a situation where we allow refugees into the country,” said "Fox & Friends" co-host Brian Kilmeade during the show. “There’s just got to be order and a method and a practice to practice. You can’t just have random people coming across. But way to highlight the human aspect of it.”

Immigration continues to be a politically charged topic as the midterms approach. The second migrant "caravan," carrying an estimated 7,000 to 10,000 Central American migrants, largely consists of Hondurans fleeing crime and violence and crime in their homeland. The group of migrants entered Mexico from Guatemala and is now on its way toward the U.S. border.

Honduran authorities say at least two men have died so far on the journey. One fell off a truck in Mexico and the other was killed trying to board a truck in Guatemala, Reuters reports.

The caravan in Mexico is still a long distance from the U.S. border and Mexican officials still hope to disperse  hopes to disperse it before it gets that far, encouraging migrants to apply for asylum in Mexico instead.

President Trump’s hard-line immigration policy has already sparked national controversy, especially the "zero tolerance" policy that led to family separation and the incarceration of children near the border. Recently Trump has vowed to send troops to the border to block the caravan, saying their intention to migrate is “an assault to our country,” according to USA Today.

By all accounts, Trump and the Republicans believe his voter base enthusiastically supports his immigration policy. With just two weeks till the midterm elections, the president likely hopes these recent headlines will work in Republicans' favor.