After the president said a boycott of Harley would be "great" in August, US sales drop 13 percent for the quarter 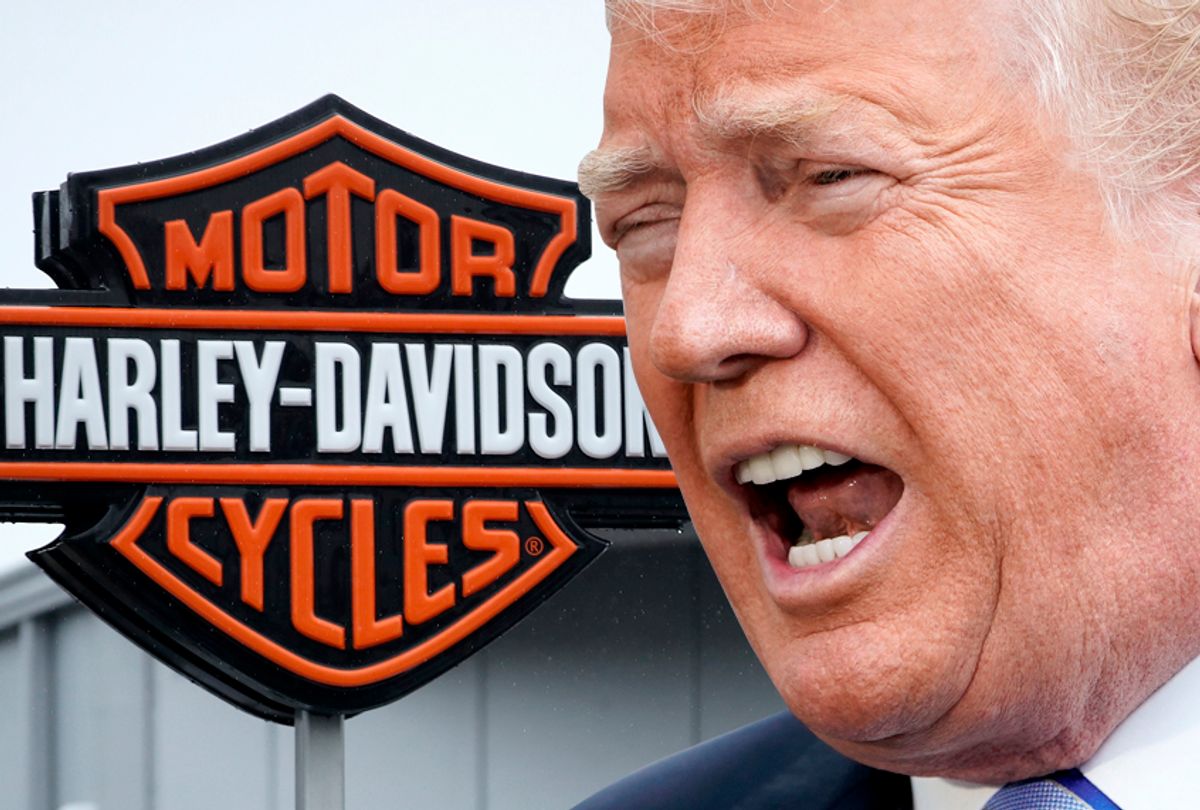 The American motorcycle behemoth saw its domestic sales decline by 13 percent between June and September, the steepest drop suffered by the company since 2010, according to Bloomberg. Fortunately for the company, they still experienced overall revenue growth due to a richer mix of shipments, which offset both the loss of American demand and marginal growth in other countries. Nevertheless, the company was clearly hurt by Trump's decision to call for a boycott, one that was prompted by their decision in June to move manufacturing for European motorcycles over to Europe in order to offset the deleterious effects of the European Union's retaliatory tariffs.

"Many @harleydavidson owners plan to boycott the company if manufacturing moves overseas. Great!" Trump tweeted in June, kicking off the boycott. "Most other companies are coming in our direction, including Harley competitors. A really bad move! U.S. will soon have a level playing field, or better."

It wasn't immediately clear whether Trump's boycott would work. In August, The New York Times reported that motorcycle enthusiasts were sharply divided over Trump's decision, although this anecdote about a cyclist named Gary Rathbun seemed to sum up the view of many reacting to the company's decision to move some of its manufacturing overseas:

Gary Rathbun rumbled into South Dakota to attend the United States’ pre-eminent gathering of motorcycle enthusiasts atop his Harley-Davidson, a 2009 Ultra Classic that brought him 800 miles from Idaho. It is the 40th Harley he has owned. It is also likely to be his last.

Like many of Harley’s most loyal customers, Mr. Rathbun was enraged by the company’s announcement this summer that, because of the Trump administration’s trade fight, it would begin manufacturing the bikes it sells in Europe outside the United States.

His anger echoed that of President Trump, whose public denouncement of Harley’s decision has put one of the country’s most iconic brands in the uncomfortable position of clashing with a president who is immensely popular with most of its customers.

This isn't the first time that Trump's trade policies have caused collateral damage for a major American industry. The president has had to spend $12 billion bailing out farmers hurt by Chinese retaliatory tariffs,

and in July a senior fellow for trade and global opportunity at the Progressive Policy Institute named Ed Gerwin predicted that Trump's tariffs would hurt American businesses.

"These new duties are often described as ’tariffs on China’ or ’tariffs on the United States,’ but they’re really taxes on American businesses, workers, and consumers," Gerwin told Salon.

He added, "The Administration’s new trade taxes on items like auto parts, electrical components, and machinery will raise costs for American businesses, make it harder for them to compete, and destroy many more American jobs than they protect. And, even if American consumers don’t pay the tariffs directly, they’ll ultimately pay higher prices."

"There’s only so much we can make and sell to one another," Lieberman told Salon. "For the good of our economy, we got to be able to sell the stuff we make here, the services we create around the world, and that requires trade. And generally speaking, it’s easier to do business in America than for us to do business in a lot of countries in the world. So the lower tariffs are in other countries, the better our economy is going to be."