"Many seasoned journalists felt [Kelly's] comments are an insult to the profession," one source at NBC tells Salon 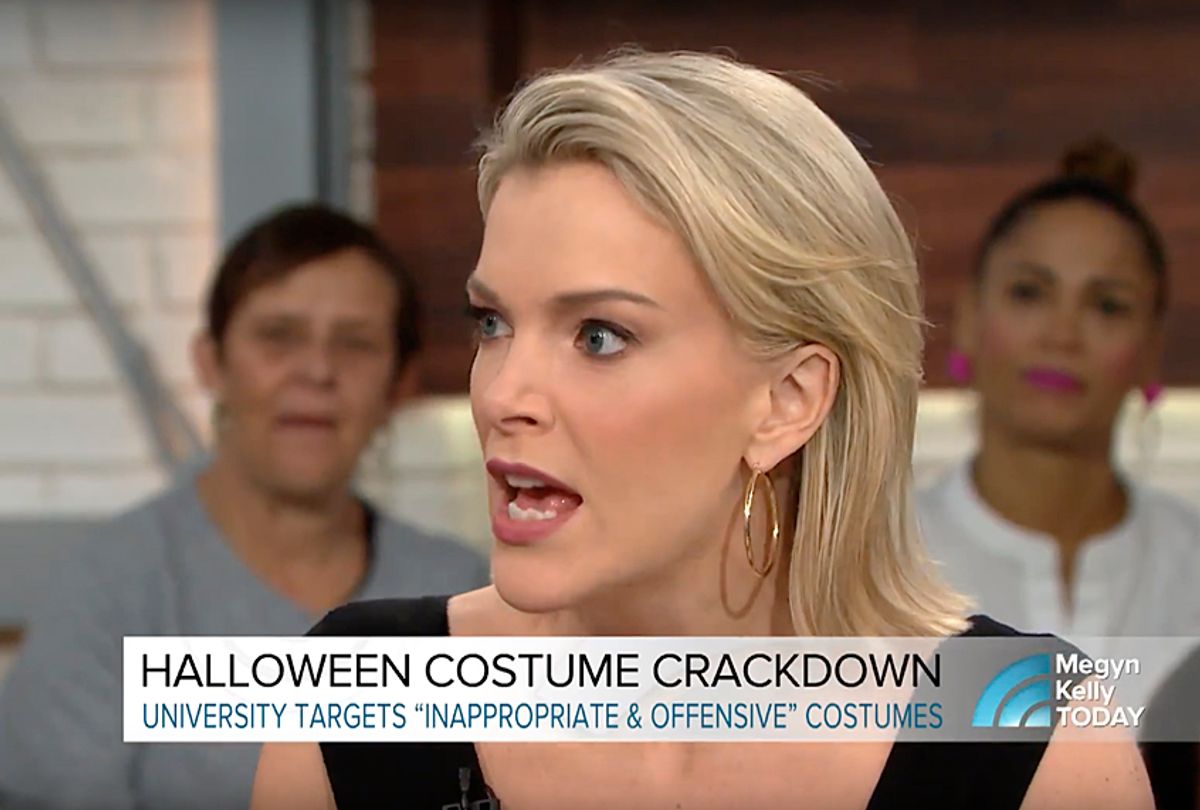 During a debate over problematic Halloween costume choices, "Today Show" host Megyn Kelly suggested that applying blackface is not racist.

"Back when I was a kid, that was OK as long as you were dressing up as a character," she added.

While her panel of guests on the third hour of the venerable morning show franchise politely disagreed with Kelly — suggesting that if you have an inclination that a costume is offensive, it probably is, and that people who are offended have the right to voice their concerns over your costume choice — Kelly would not let up.

Instead, Kelly revisited the controversy surrounding "Real Housewives of New York" star Luann de Lesseps, who formerly dressed up as Diana Ross for Halloween and appeared to darken her skin for the costume. People were outraged, and de Lesseps apologized for the costume choice, while denying that she had altered her skin tone.

"I never meant to hurt anybody’s feelings. I love Diana Ross and I totally respect Diana Ross," she later told Andy Cohen, adding, "I didn’t add anything to or would ever, ever dream of doing a blackface – ever."

Kelly appeared to not comprehend the backlash. "I don't see how that got [deemed] racist on Halloween," she said.

"I have not seen it, but it sounds a little racist to me," panel guest and NBC correspondent Jacob Soboroff replied. "Me too," Jenna Bush added.

But Kelly pushed back, saying, "I can't keep up with the number of people we're offending just by being normal people these days."

Among the people Kelly offended were her own colleagues in the news division at 30 Rockefeller Plaza, who told Salon that the former Fox News anchor's comments had upset Soboroff and numerous other journalists at NBC News. Some suggested she had insulted their profession and tarnished the legacy of the "Today Show" brand.

A source at NBC told Salon, "Normally when she f***s up, people just sort of whisper about it." But with Kelly's blackface comments, the source continued, "Today is one of the rare days when everyone in the building is openly talking about how ridiculous it is."

"The newsroom was stunned," another source from NBC added, "and many seasoned journalists felt her comments are an insult to the profession. She is now officially a racist. First 'White Santa,' now this. What appalled many NBC staffers is the fact Kelly would go racist, even dabble in it, on the family-friendly 'Today Show.' Bad message on such a prominent and historic program."

People on Twitter were also incensed at Kelly, but not surprised. They pointed out that she has risen to the top of the TV news biz, despite her many instances of racially questionable remarks. One user argued that Kelly's penchant for offensive statements and the outrage and attention they attract is the reason NBC hired her in the first place.

When she was at Fox News, Kelly notoriously declared that Santa Claus — a fictional character — was white, and assured children at home not to get confused by the debate, as "Santa just is white . . . OK, just wanted to get that straight."

"Just because it makes you feel uncomfortable, doesn't mean it has to change," Kelly continued. "Jesus was a white man, too." She attributed this to "verifiable fact," even though history suggests otherwise.

After tweeting about Kelly's blackface comments, Slate political correspondent Jamelle Bouie added on Twitter: "I’ve seen comments that blast NBC for not having a black person on the panel, but honestly, minstrel shows and blackface were a popular form of extremely racist mass entertainment in America up through the early 20th century. People who comment for a living should know that."

Author and television host Padma Lakshmi condemned Kelly for her "ignorance," saying: "You are on national television. You have a responsibility to educate yourself on social issue" and linked to a Washington Post article that provides a history of blackface minstrelsy.