As the host of NBC's flagship morning show, Kelly would love to erase her race-baiting Fox News past. But she can't 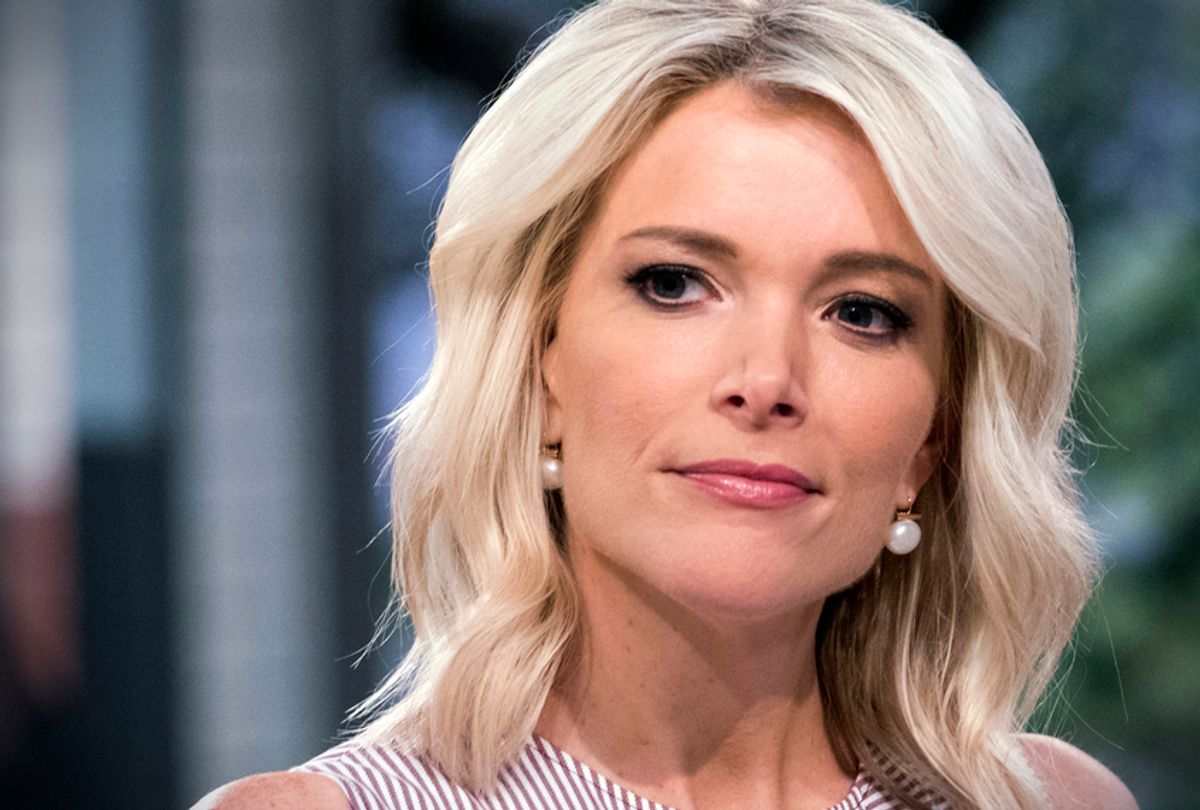 Megyn Kelly made an impassioned plea for Americans to be more courteous to one another, during the third hour of the "Today" show on Wednesday. It was the third morning in a row that the NBC News host had raised the topic of civility after a Virginia restaurant declined to serve White House Press Secretary Sarah Huckabee Sanders over the weekend because of the supporting role she plays in the "inhumane and unethical" Trump administration.

"I'm Megyn Kelly, and we begin today with the ongoing erosion of our cultural norms like civility and respectful debate," the "Today" host said as she greeted viewers.

Kelly then tossed to a viral clip of pro-immigrant protesters who confronted Senate Majority Leader Mitch McConnell, R-Ky., and his wife, Transportation Secretary Elaine Chao, at an event in Georgetown on Tuesday.

The secretary, who is a Taiwanese immigrant, verbally responded to the demonstrators by shouting, "Why don't you leave my husband alone?"

While Kelly acknowledged that a bedrock principle of the First Amendment is freedom of speech, she suggested that the peaceful protesters who had asked Chao's husband why he was "separating families" were somehow breaking the rules of civil discourse by virtue of confronting McConnell face-to-face.

"The answer to speech you don’t like is not less speech – it’s more speech. And so you don't shut down Mitch McConnell, you don't shut down Elaine Chao, you don't shout in their face," she explained. "You let them say their piece. And then – in my view – you go out there and you organize. And you get people to vote, and you stand up and you cheer at the top of your lungs if you believe this is wrong."

"But, you don't do it in their face and demand civility by being uncivil," Kelly concluded.

The NBC News version of Kelly wants America to hold hands and sing, "Oh, Lord! Kumbaya!" But Kelly has never acknowledged how the years she spent on Fox News helped contribute to the erosion of civility in American political discourse. She cannot rewrite history by simply switching networks.

Many Americans seem to have forgotten about Chris McMurray, the Colorado baker who told former Vice President Joe Biden he was not welcome at a store called Crumb and Get It in 2012. (Yes, Sanders was not the first White House player to be denied service at an eatery.)

“I have a difference of opinion of the folks in that campaign, that’s what it was," McMurray said at the time. "Also, taking a stance for my faith, my faith in God.”

McMurray's rejection of the Democratic veep was cheered by Fox News – the same outlet that is now deeply outraged by Sarah Huckabee Sanders' rejection from the Red Hen.

"You know, he's a regular American guy. It's a small business," Kelly said of McMurray at the time. "It's only been open for three months, but he rejects an offer from the vice president."

One of the then-Fox News host's guests lauded "Chris the baker," even going so far as to declare his decision to be revolutionary.

"And what we're seeing is sort of tiny revolutions," he said. "Chris the baker standing on – you used the correct word, it's principle – stood on his principle."

NBC News bet $69 million on its ability to rebrand Kelly as just another friendly "Today" castmate alongside the authentic Hoda Kotb.

“I need to introduce myself to people who don’t know me or know some bastardized version of me that they’ve gotten from a website or a TV show,” Kelly once said. “There are definitely some who only know me through some caricature they learned about on ‘The Daily Show.’"

Despite pumping saccharine into Kelly, her long history of stirring up racial resentment as a Fox host lives on. It was all recorded on camera, after all. Survey after survey has demonstrated how such sentiments ultimately led to the rise of Trump. For example, a Washington Post survey on millennials revealed the following:

Contrary to what some have suggested, white millennial Trump voters were not in more economically precarious situations than non-Trump voters. Fully 86 percent of them reported being employed, a rate similar to non-Trump voters; and they were 14 percent less likely to be low income than white voters who did not support Trump. Employment and income were not significantly related to that sense of white vulnerability.

So what was? Racial resentment.

Kelly, like many of her peers at Fox News, was adept at stoking racial tensions among white Americans who have seen their relative social status wane as civil rights advance. She once infamously proclaimed that Santa Claus, who is actually a fictional character (sorry for the spoiler!), was white.

"For all you kids watching at home, Santa just is white," Kelly once said. "Santa is what he is – and just so you know – we're just debating this, because someone wrote about it."

She later alleged that her remarks were never meant to be racially insensitive and had been taken out of context. "Humor is a part of what we try to bring to this show, but sometimes that is lost on the humorless," she claimed. "And Fox News and yours truly are big targets for many people."

Santa was not the only powerful man who Kelly wanted children to know shared her same skin color.

"Jesus was a white man, too," she once said. (A statement many historians and biblical scholars would view as unproven or problematic.) He was a historical figure – that's a verifiable fact, as is Santa," she said. "I just want the kids watching to know that. But my point is: How do you revise it in the middle of the legacy of the story and change Santa from white to black?"

Such racially-tinged rhetoric was also profoundly unscientific. It taught the children Kelly believed were watching her Fox News show that there is a clear distinction between being white and black, when in fact there is no biological basis for the category of race. Research conducted by Harvard psychologist Mahzarin Banaji suggests "that children exposed to racism tend to accept and embrace it as young as age three, and in just a matter of days."

Children learn language effortlessly, even though language is incredibly complex. They’re learning language at one year old just by listening to people talk. A developing child also tries to determine which social groups will be important.

Let’s say a mother is in a conversation with another adult at the playground, and her child overhears her say, “It's so great that we have a black president.”

The child just learned a lot about the world from this remark. She learned that there's a category called “black.” Every other time she heard the word “president,” it didn't have the word “black” in front of it. She learned that this new term is really important. And she learned that her mother is excited or angry or sarcastic about it, depending on the tone of voice.

As a result, the child forms what’s called a cognitive placeholder, and she goes about actively trying to figure out what that category of people is like and using that placeholder in social situations.

After a national conversation about excessive force was sparked when a 14-year-old in Texas named Dajerria Becton was body-slammed head first into the ground by a police officer while attending a pool party, Kelly suggested the teenager had deserved it.

“The girl was no saint, either,” Kelly said of Becton. “He had told her to leave, and she continued to linger. When the cop tells you to leave, get out.”

Kelly again claimed that her comments had been ripped out of context – a tactic she employed more than once during her time at Fox News in an attempt to change the narrative about potentially racist remarks by framing herself as the true victim.

Kelly specifically slammed a former news writer from this publication, calling out "Scott Eric Kaufman, a writer at Salon, which is a far-left website that descends into ugly partisan hackery."

"I took no position on the matter, other than to acknowledge the brutality of the cop's actions and the decision-making of the young woman that brought her into his focus," Kelly claimed.

If you view the tape of her Fox News segment, the evidence suggests otherwise.

Kelly is far from the first Fox News host to face allegations of racism. This topic was broached in the article "Can Megyn Kelly escape her past?" by Atlantic contributing editor Caitlin Flanagan in March:

More important, why has she left her vigorous — and much discussed — interviews about the Black Lives Matter movement out of "Settle for More"? In her memoir, she observes that Fox News anchors are frequent targets of unfair accusations of racism. That bothers Kelly, who regularly and appreciatively hosts black conservatives on her show. But to see her segments on Black Lives Matter — which first aired as the primaries were getting under way and continued until the general election itself — was to see how Fox often stirred up racial anger among its viewers, a kind of anger that was crucial fuel for the Republican outcome Roger Ailes so desired.

Amid her calls for civility on "Today," Kelly bashed Rep. Maxine Waters, a highly successful black woman in Congress, whom she compared to a child and suggested was advocating violence, in racially-tinged comments:

I have an eight-year-old and a seven-year-old and a four-year-old. And if one hits the other, I don't teach them to not hit by hitting them. I don't hit my kids, because I don't think you learn the lesson to not hit by receiving the same behavior. And I think Maxine Waters could use that same lesson. You don't call for incivility, or arguably violence – because that's how it sounded to me, too – in response to your own anger about what's happening at the southern border. It's not the way forward.

NBC News' Stephanie Gosk, who was a guest on the segment, immediately pushed back.

"I think what she's calling for here is protest," Gosk said, correcting Kelly.

After Kelly's 2012 comments, Jon Stewart skewered her on "The Daily Show," saying that it was yet another example of Fox News "expressing anger and victimization over the loss of absolute power and reframing it as persecution of real America by minorities, freeloaders and socialists." His crystal ball proved accurate.

After her big move to NBC News, Kelly claimed she was portrayed as a "caricature" by Stewart. Ask yourself this: Can she in good faith deny that the seeds of racial resentment she sowed behind her desk at Fox contributed to the festering white anger that helped elect Trump – and helped erode what little civility was left in American politics?