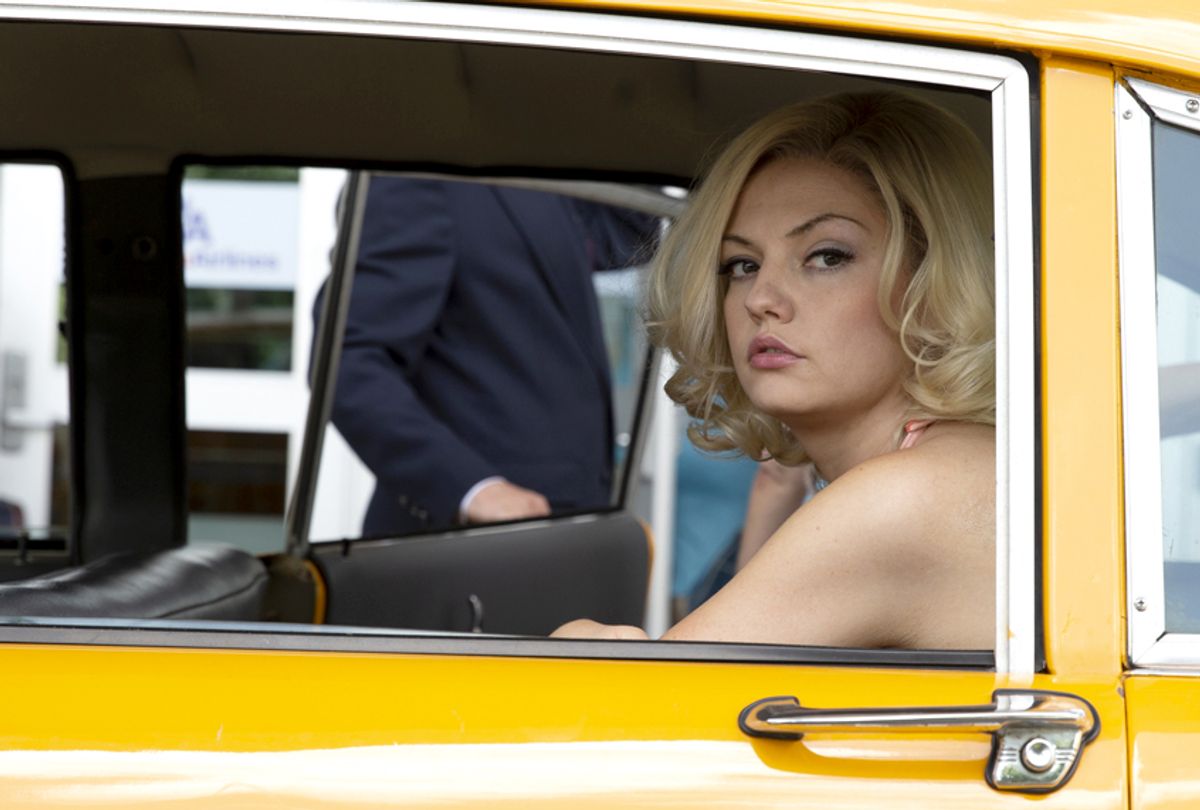 Despite the fact that Meade had been doing sex scenes since she was 16 years old, they still had the power to make her feel uneasy. Part of the problem was that she sometimes felt so alone. When she had misgivings about a scene, was uncomfortable or cold, or felt too naked — physically or emotionally — in between takes, it was always up to her to say so, right there in front of everyone. Like many actors, she didn’t want to disappoint the people she worked with or to seem like she was complaining. Over the years, she’d often resigned herself to taking the path of least resistance, even if it took a toll on her. For some jobs, she even packed her own safety supplies, like a flesh-colored thong that she hoped would protect her during nude scenes. All too often, no one else considered those details.

But things were different this season on "The Deuce." As Meade knelt down, a woman named Alicia Rodis, the network’s first-ever “intimacy coordinator,” was within eyeshot, watching the monitor. She had given Meade a pad for her knees, knowing that the hard floor would bruise them otherwise. Between takes, she offered mouth spray and flavored lubricant. And she had spoken with Meade before the scene about her concerns and relayed them to the director. In a moment when Meade was completely exposed, Rodis was there, providing physical, social and professional protection.

It was a welcome change that Meade herself had initiated. The previous winter, amid the roiling outcry about sexual assault and rape culture — especially in Hollywood — Meade had gone to HBO executives and demanded change. She needed some kind of advocate on the set, someone to help her when she had a sex scene to film.

She got her ask — and then some. Network executives found Rodis through Intimacy Directors International, a nonprofit she cofounded in 2016 that aims to normalize a set of standards and practices surrounding the execution of sex scenes on stage and on film. Rodis’ hiring has made such an impact that showrunner David Simon told Rolling Stone in September that he would never work without an intimacy coordinator again. Following suit, HBO has now adopted a policy whereby all of its shows and movies with intimate scenes will be staffed with an intimacy coordinator — either Rodis or someone like her. Along with her work on "The Deuce," Rodis is already overseeing the sets of "Crashing," the upcoming Damon Lindelof-helmed "Watchmen" series and "Deadwood" (the movie); she is training other intimacy coordinators to work on "Jett," about a female ex-con, and "Euphoria," a coming-of-age series about high school kids.

Rodis, a Cleveland native who settled in New York City 12 years ago, is a former actor with a background in movement, specifically as a stunt performer and fight scene director. Before becoming an intimacy coordinator, she trained and consulted with psychologists, entertainment lawyers, social workers and professional sex workers, among others, in an effort to do for sex scenes what has long been done for fight scenes: to acknowledge that they are fraught with potential pitfalls — physical and emotional — and to protect those involved. Meade describes Rodis as “like a mother or a sister on set” who looks out for her and other actors. The job has existed in the theater world for several years, but it is relatively new to film and television.

“Even I didn’t understand the scope of just how much this had been ignored, and for how long,” Rodis says of the need for intimacy coordinators. “There is such a power dynamic on sets, so much pressure and this sense that [as an actor] you just suck it up and do it.”

In practical terms, Rodis is a mediator among actors, directors, producers and crew. She reviews scripts, facilitates group discussions about the sex scenes they’re going to film and meets with actors individually. When new or tweaked sex scenes are added to a day’s shoot, she is often the one to break the news to an actor, checking in to clarify what their personal boundaries are — to make sure, as she puts it, “consent is informed and certain before we move forward.” Then she advocates for the actors in discussions with the production team.

“It’s not the things [she does] that are so radical,” Meade says. “It’s just having someone other than yourself to think about it. It shouldn’t be a radical concept to give someone something to cover their private parts. But to have someone do it at all — the gesture of it — it helps.”

Beyond covering people’s genitals with pieces of cloth and athletic cups, Rodis uses her background in choreography and movement to help Meade and other actors approach the physicality of sex scenes differently.

“She understands how to help us choreograph things to make them look more real than they are, by actually doing something less real,” Meade says. “Left to your own devices you’re just sort of doing what you do in real life. And that’s a problem if you don’t want it to feel like real life.”

Rodis calls this “separating the sexuality between the characters and what’s actually happening between the actors.”

In other words, Rodis makes the set feel more like a real office, which is what it is for actors. That’s a point that’s often lost on both viewers — who see the finished product, where very pretty people get naked in appealing ways — and the director, producers and crew, who aren’t the ones suddenly stripped down in front of a bunch of people they work with.

It’s easy to forget that the room they’re in has only three walls, that they’re surrounded by onlookers, blasted by hot stage lights, not necessarily actually attracted to their co-workers. It’s easy to forget that their kisses are scripted and scheduled, that a director is standing there asking them to do it, that it’s work that can be, even under the best circumstances, uncomfortable and triggering. Pile all that on top of a general cultural awkwardness around the mechanics of sex, and it’s clear why sex scenes have been, in general, talked about very little before they’re filmed.

“With intimate moments, from kissing to intense sex scenes, it’s been the practice [for directors] to just say ‘Whatever you’re comfortable with, just go for it,’” Rodis says. “But if you’re not giving someone a map or an exit or a voice, just asking actors to roll around and get off on each other, are you asking your actors to do sex work? Or tell a story with their movements?” She adds, “If your set doesn’t have an intimacy coordinator, at best, you might not be able to tell the story you wanted to tell. At worst, you have actors who are being physically assaulted.”

Rodis says that most people she talks with have a horror story about a badly made sex scene that made them feel extremely uncomfortable. “Actors tell me, ‘I have to live with what I did on set two years ago.’ Or, I’ve had a sound person say to me, ‘I’ve seen things I can never un-see, things that kept me up all night for a week.’” Even on good sets, like "The Deuce," Rodis notes, the inherent power imbalance on set can often encourage actors to go ahead with things despite reservations.

That’s partly why, in addition to choreography and physical protection, Rodis pays attention to the way people talk about sexual acts on set: “A director can be like, ‘Yeah, you grab her tits.’ And it’s that moment of, ‘Hmm, we’re at work.’ So I’m not going to say, ‘He fucks her.’ Instead I’ll say, ‘Let’s talk about how we create this aggressive motion.’ I reframe the wording so the actors know what they’re physically doing.”

While seemingly subtle, that kind of direction can be all the more vital when filming a series. With movies, Meade explains, she would likely have weeks of advance notice about a sex scene, ample time to prepare psychologically and emotionally as well as physically. But television is produced in a much shorter timeframe, meaning actors sometimes learn about the specifics of a sex scene just 24 hours before filming it. Having Rodis there to notify her of changes and strategize her approach, Meade says, has helped her to feel more comfortable.

The end result on a show like "The Deuce" isn’t less sex, sanitized sex or boring sex. It’s a better-executed story — and acting that the actors can live with.

“I am here to give a voice to actors, especially actors who feel like they don’t have one. And I’m also here for the producers, to make sure that they know they’re doing their best to make sure the set is safe,” Rodis says. “Here we are a year after #MeToo and Brett Kavanaugh sits on the Supreme Court. Donald Trump is our president. Now, tell me we don’t need this — that we don’t have a culture that needs to still be changed.”