Marc Benioff spends millions to support the campaign, while many of his industry peers spend millions to oppose it 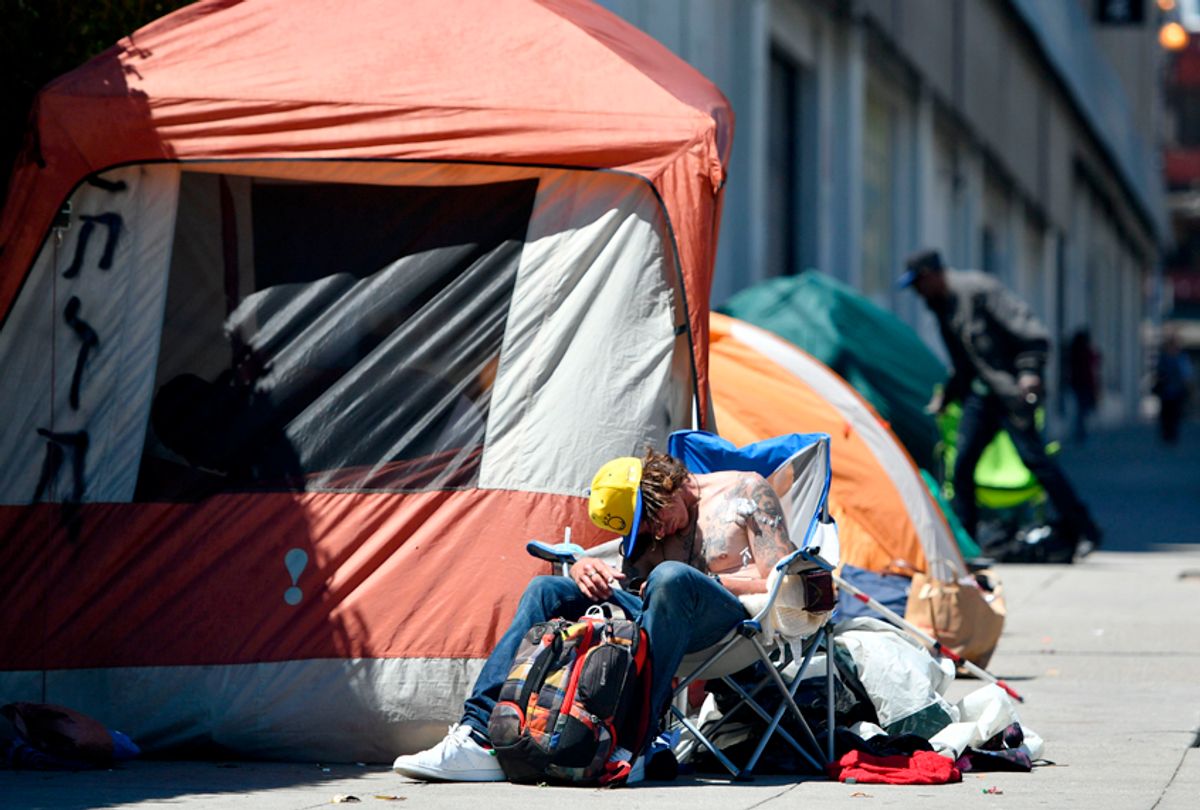 A homeless man sleeps in front of his tent along Van Ness Avenue in downtown San Francisco, California on June, 27, 2016. (Getty/Josh Edelson)
--

A handful of San Francisco-based tech companies are in favor of reducing the city’s homeless population — as long as they don’t have to foot the bill.

There is a burgeoning war between some of tech’s wealthiest companies and their leaders over a San Francisco ballot measure, Proposition C, which would tax businesses to fund homelessness initiatives.

At the center of the debate is Twitter and Square CEO Jack Dorsey, who opposes the measure, and Salesforce CEO Marc Benioff, who supports it. These two billionaires are demonstrating their commitments to their respective opinions (which have been publicly debated on Twitter) through hefty monetary contributions. Benioff has personally contributed $1 million to the campaign in favor of the measure called “Our City, Our Home, Yes on C,” according to campaign filings. Dorsey has contributed $75,000 to the campaign opposing the measure, “No Plan, No Accountability, No on Prop C,” which is sponsored by the San Francisco Chamber of Commerce, according to campaign filings. Square, Dorsey’s company, has also donated $25,000.

“I want to help fix the homeless problem in SF and California,” Dorsey wrote in a Twitter post earlier this month. “I don’t believe this (Prop C) is the best way to do it.”

The ballot measure at issue would raise nearly $300 million for homelessness initiatives each year in San Francisco by raising the gross receipts tax by an average of 0.5 percent for businesses in the city that earn more than $50 million a year. Nearly half the money raised would go toward  installing 1,075 new shelter beds and building or subsidizing an estimated 5,000 new affordable housing units over the next eight years. In 2017, an estimated $380 million was spent on helping San Francisco’s homeless population. The proposed tax increase would nearly double that budget.

Dorsey isn’t the only tech industry leader to oppose the measure forcefully. Companies such as Stripe, Lyft, Forward and Visa, along with investor Paul Graham and venture capitalist Michael Moritz, have collectively donated nearly $2 million to the campaign opposing the measure. Tech companies who have contributed to the pro-Prop. C campaign, on the other hand, are far and few between. According to campaign filings, Benioff and Salesforce clearly dominate the list of of big donors: they have collectively contributed more than $5 million. As far as small-dollar donors go, engineers from Square, Dropbox, Stripe and Apple have contributed as individuals, despite the opposition of some of their companies' leaders.

Sam Lew, the policy director of the Coalition on Homelessness and campaign manager of “Our City, Our Home, Yes on C,” said the pushback from a select few tech companies is not representative of the community as a whole.

"The Prop C campaign has seen an overwhelming amount of support from the tech community in both volunteers and donors, while only four tech companies have publicly come out against it," she told Salon in an email. "We know that tech workers and companies want to invest in the communities that they work and live in — and we have seen that reflected with the sheer number of volunteers and donations."

“Our homelessness spending has increased dramatically in recent years with no discernible improvement in conditions,” Breed wrote in a statement on Medium. “Before we double the tax bill overnight, San Franciscans deserve accountability for the money they are already paying.”

The city's latest point-in-time homeless tally counted 7,499 people on San Francisco's street in 2017 — a 0.5 percent drop from 2015. There were positive signs in the 2017 count, however. The city saw a 40 percent decline in homeless youth, meaning people under age 24, which some officials have attributed to an increase in housing that specifically supported homeless youth.

“But what we can see from this is that there are areas where, when we invest wisely, we see reductions,” Jeff Kositsky, director of the city Department of Homelessness and Supportive Housing, told the San Francisco Chronicle at the time.

Politicians in favor of the tax include Sen. Dianne Feinstein, D-Calif., House Minority Leader Nancy Pelosi (whose district is entirely within the city, and  Rep. Jackie Speier, D-Calif.

If this sounds like a familiar tale, that’s because it is. In June, Seattle city officials and big tech companies like Amazon, were up in arms about a similar measure. In May 2018, Seattle's City Council passed an "employee headcount tax," which would have taxed companies in Seattle that make more than $40 million a year at a rate of $275 per employee. That funding was to be allocated to homeless shelters, affordable housing and public health services.

In June, the city repealed the ordinance, motivated by a referendum led by the No Tax on Jobs Coalition. Amazon was a lead contributor to the campaign. That happened after Amazon had halted construction planning on a new downtown Seattle tower before the first vote on the headcount tax —a move that was widely seen as a threat.

Seattle City Councilmember Kshama Sawant told Salon in a statement in June that activists in other cities advocating for similar measures should be prepared for ruthless pushback from big businesses.

"Activists in other cities should learn from the successes and failures of the affordable housing movement in Seattle," Sawant said. "Big business will fight back against any attempt to shift the tax burden off the backs of working people, and the only way we can stand up to that is with a mass grassroots movement, deep enough to knock on doors, discuss in workplaces, and systematically answer the lies and misinformation big business will spread."