This is Trump's America: Slaughter in Pittsburgh, racist killings at Kroger and the MAGAbomber

Is our country really this sociopathic? Unfortunately, that's possible — and Trump is a symptom, not the disease 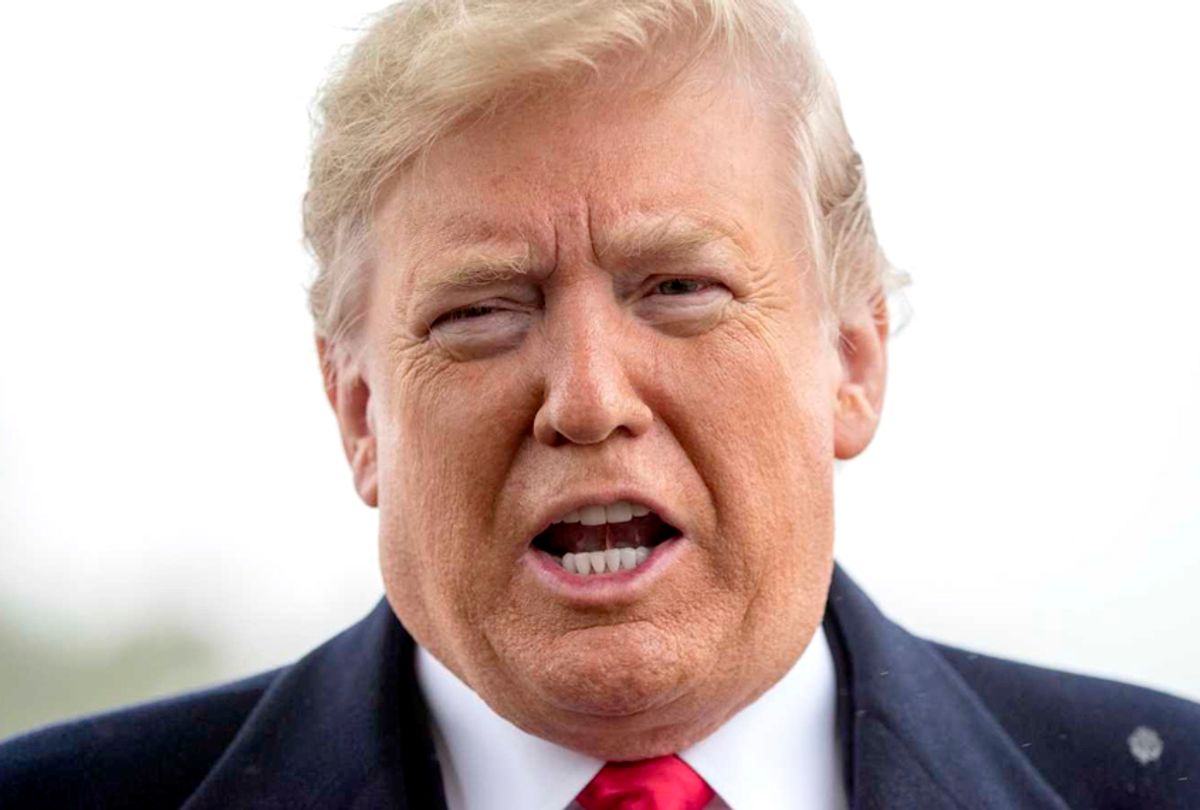 I am playing Childish Gambino's "This Is America" as I write this. I can think of no better song to describe these last few days and weeks in this country.

On Saturday an apparent white supremacist named Robert Bowers allegedly massacred 11 people at the Tree of Life synagogue in Pittsburgh. After he was subdued, Bowers also made statements that Jewish people were committing "genocide" against "his people." He told the police that he wanted all Jews to die. Bowers announced his impending attack on the alt-right-friendly social media platform known as Gab, which has since been shut down:

HIAS [Hebrew Immigrant Aid Society] likes to bring invaders in that kill our people. I can’t sit by and watch my people get slaughtered. Screw your optics, I’m going in.

The Pittsburgh massacre is reportedly the worst single act of anti-Semitic violence in American history.

At a rally hours after the Pittsburgh massacre, President Donald Trump joked about having a "bad hair day." It would seem that Trump believes his peculiar hairstyle is more important than a mass murder in America inspired by his and his allies' rhetoric about an "invasion" or a "horde" of immigrants from Central America who pose some imaginary existential threat to White America.

For Donald Trump, Fox News, the Republican Party and their public these refugees and migrants are would-be rapists who are willing to travel thousands of miles, mostly on foot, in order to attack and kill white women and commit other crimes against "real Americans." Trump's own spokespeople will even admit that this fear-mongering about desperate refugees is designed to help Trump and the Republican Party win the midterm elections -- even if these lies inspire murder, as they did in Pittsburgh on Saturday.

By the end of day on Sunday, with the nation still reeling in shock, Trump was claiming on Twitter that he is the real victim, not the 11 people killed at the Tree of Life synagogue:

The Fake News is doing everything in their power to blame Republicans, Conservatives and me for the division and hatred that has been going on for so long in our Country. Actually, it is their Fake & Dishonest reporting which is causing problems far greater than they understand!

Two days before Bowers killed 11 people, a white racist wanted to wash himself in the blood of black people. Perhaps meaning to emulate Dylann Roof's infamous crime in South Carolina in 2015, Gregory Bush allegedly attempted to enter a black church in Louisville, Kentucky, on Thursday to commit mass murder. The door was locked. Bush then decided to kill two elderly black people in a nearby Kroger supermarket parking lot. Maurice Stallard and Vickie Lee Jones were sacrificed on Bush's altar of hate.

Last week, Cesar Sayoc, the accused "MAGAbomber," allegedly targeted at least 12 Democrats with pipe bombs. (The FBI has confirmed these were real functioning devices, not fakes.) This was the largest assassination plot in American history and could be described as an attempted decapitation strike against those who Donald Trump and the right-wing media have repeatedly targeted as traitors or "enemies of the people."

Sayoc reportedly lived in a van covered in pro-Trump stickers, images of Hillary Clinton in the crosshairs, and attacks on CNN and various liberal figures, as well as nooses and Ku Klux Klan imagery. This man's home was literally a right-wing meme machine on wheels.

In a speech on Saturday, Donald Trump said this in response to the Pittsburgh synagogue massacre:

This wicked act of mass murder is pure evil, hard to believe, and frankly, something that is unimaginable. Our nation and the world are shocked and stunned by the grief.  This was an anti-Semitic act. You wouldn’t think this would be possible in this day and age.

Apparently, the president is suffering amnesia about the white supremacist attacks on Charlottesville last year that killed Heather Heyer and injured dozens of other people. Trump said at the time that there were "very fine people" among these neo-Nazis, Kluxers and other racial terrorists. Perhaps Trump's selective amnesia also extends to the six people of the Sikh faith murdered at their Wisconsin temple in 2012, or the six Muslims killed in a Quebec mosque in 2017. As in Pittsburgh, these were mass murders committed by white men who were radicalized by right-wing media.

Donald Trump also chooses to ignore or deny the large increase in hate crimes that his political ascendancy has spawned, the dozens of documented attacks by his supporters wearing his regalia and chanting his slogans, the murders and other acts violence against nonwhites and Jews by his supporters, and the right-wing street gangs who attacking his enemies or threaten and harassing Democratic politicians, as happened to House Minority Leader Nancy Pelosi in Florida last week.

Trump and his administration have defunded programs targeting right-wing domestic terrorists. He and other Republican leaders have chosen to overlook the dire threat to public safety posed by members of the white-supremacist right, a threat senior American law enforcement officials have described as being greater than that posed by radical Islam.

Donald Trump is proudly ignorant and may actually be unaware of America's long history of racial pogroms and ethnic cleansing against black and brown people, such as the bloody Red Summer of 1919 or the other acts of white racial terrorism that killed tens of thousands of black Americans from the end of the Civil War through the middle of the 20th century.

Donald Trump's brand is violence. The seeds were planted by conservatives over the course of the last few decades; he is the constant gardener.

At his rallies, in interviews, through fundraising emails and on social media, Donald Trump has made threats against Hillary Clinton, Nancy Pelosi, journalists and reporters, African-American athletes who dare to protest police brutality, Muslims and nonwhite immigrants and refugees. Trump has also sounded alarm about "globalists" such as billionaire Democratic booster George Soros and proclaims himself to be a "nationalist." These are thinly veiled signals to white supremacists, neo-Nazis and other members of the "alt-right," where "nationalist" is code for "white nationalism" and "globalist" is a transparent anti-Semitic smear.

Donald Trump and his allies did not directly tell Robert Bowers, Cesar Sayoc and others to commit acts of terror and violence. But they inspired those acts and gave permission for them, while retaining just enough deniability to profess their innocence after the fact.

America is a sociopathic society. Bullying is a central part of the country's diseased culture. Sociologist Charles Derber explains this:

Bullying enhances the ideology that the strong are strong and the weak are weak, and each deserves to be where they are. This attitude pervades America’s culture, government, military, corporations, media, schools, entertainment, athletics and everyday life. The first step to a solution is shifting the conversation to institutional bullying, moving beyond simply a therapeutic narrative to a political one aiming toward transformative social change. As long as the United States embraces militarism and aggressive capitalism, systemic bullying and all its impacts – abroad and at home – will persist as a major crisis.

Trump and his movement are a symptom of American sociopathy, not the cause. In too many ways, the Pittsburgh massacre, the "MAGAbomber," the Kroger killings and the litany of other violence Trump has encouraged are a central part of the country's national character. These are not deviations or "bugs in the system," as some observers would like to suggest. America is becoming a "pathocracy," as explained by John Whitehead of HuffPost, meaning

... tyranny at the hands of a psychopathic government, which “operates against the interests of its own people except for favoring certain groups.” Worse, psychopathology is not confined to those in high positions of government. It can spread like a virus among the populace. As an academic study into pathocracy concluded, “[T]yranny does not flourish because perpetuators are helpless and ignorant of their actions. It flourishes because they actively identify with those who promote vicious acts as virtuous.”

People don’t simply line up and salute. It is through one’s own personal identification with a given leader, party or social order that they become agents of good or evil.

As philosopher Henry Giroux concludes in his new book "American Nightmare," "Under Trump democracy is not being thinned out, it is being replaced by a regime hostile to its existence, intent on maintaining the economic conditions that have allowed the United States to slide into a unique brand of fascism."

This is America. Don't catch you slippin' up....

There is other music in my head as I write this. These are songs and albums and artists like GZA's "Liquid Swords," Darcy James Argue's Secret Society, Otis Taylor's "Ten Million Slaves," Sixto Rodriguez's "I Wonder," Marvin Gaye and David Bowie.

The last song is Sam Cooke's "A Change Is Gonna Come." I tell myself that Sam Cooke was a prophet, that his words are comfort for painful and sorrowful times. But in my heart and mind I know that the long arc of history does not really bend towards justice. Those are the sentiments of long dead martyr-dreamers. It is not that Donald Trump, his movement and supporters have robbed me (or us) of hope. No. It is simply that Trumpism has exposed, again, how deep the moral rot and sickness in America's national character -- and too many of its people -- really is. Where is the reckoning? Will it ever come?