After the arrest in Florida, Trump's guilt is clearer than ever: But will anything change?

Accused bomber appears to be a Trump fan and right-wing zealot, but of course the president will claim innocence 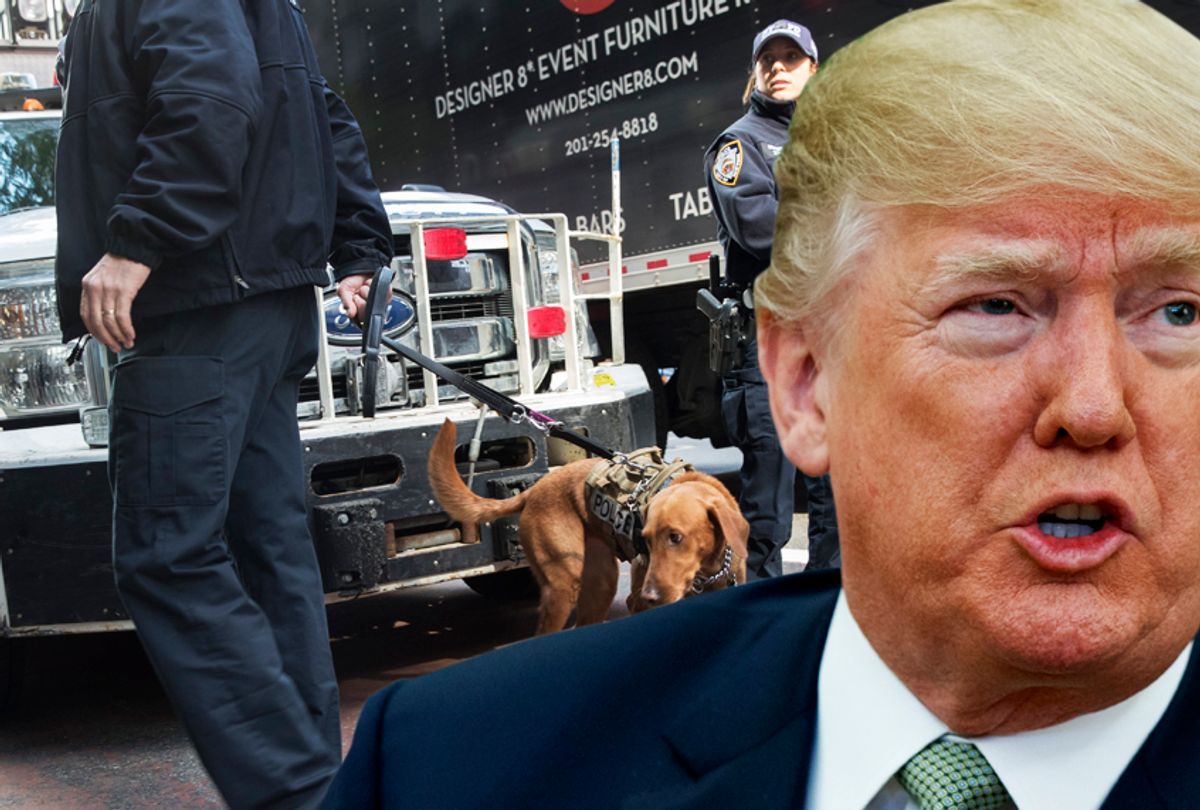 Emergency service personnel with a bomb sniffing dog work outside the building that houses New York Governor Andrew Cuomo's office after a report of a suspicious package, Wednesday, Oct. 24, 2018. (AP/Salon)
--

Donald Trump and his right-wing allies have repeatedly threatened and celebrated violence against journalists and reporters. He obsessively threatens his political enemies -- especially women, including Hillary Clinton, Nancy Pelosi and Dianne Feinstein -- with prison. During the 2016 presidential campaign, Donald Trump even implied that if Clinton were elected president and tried to enforce gun control laws, she might be assassinated. Assaults by Donald Trump's supporters against protesters who exercised their constitutionally protected rights of free speech were a feature of his rallies.

Donald Trump, Republican leaders, Fox News and other parts of the right-wing echo chamber have endlessly slurred Bill and Hillary Clintons as monsters who hate America. Likewise, President Barack Obama has been depicted as a secret enemy, likely born overseas and possibly a Muslim, who hates America and was planning the country's downfall from within. Billionaire Democratic funder George Soros is portrayed as leading a left-wing plot against America and bankrolling all sorts of sinister activities. Given that Soros is Jewish and an immigrant from Hungary, his vilification by the far right and its media is consistent with anti-Semitic stereotypes straight out of "The Protocols of the Elders of Zion."

On Friday afternoon, a 56-year-old man named Cesar Sayoc Jr. was arrested in Florida and identified as the leading suspect in these attempted bombings. Sayoc reportedly has a lengthy criminal record. News photographs of his white van and numerous social media images suggest he is a passionate Trump supporter and CNN-hater. There appears to be photographic evidence that Sayoc attended Trump rallies during the 2016 campaign, and perhaps Trump's inauguration in January 2017.

Whether or not this wave of attacks was genuinely intended to harm anyone, or merely to spread panic, it serves as a reminder that words have consequences.

It is no coincidence that the very people and organizations that have been vilified, lied about and anathematized by Donald Trump and his supporters have become the targets of this attack. This is a textbook example of what is known as "stochastic terrorism." Psychologist Valerie Tarico explains it this way:

At least before Sayoc's arrest on Friday, numerous prominent right-wing spokespeople have suggested that the entire bombing campaign was a "false flag" operation designed to gin up sympathy for Democratic candidates prior to the midterm elections. In an extraordinary tweet, Trump himself expressed regret that "this 'Bomb' stuff" -- the quotation marks seemingly suggesting doubt -- might damage Republicans politically in the upcoming midterm elections.

Trump, the lead provocateur in America's descent into political discord and violence, has hypocritically pleaded for civility while continuing his threats against the press. On Wednesday, he told supporters at a rally in Wisconsin -- as they screamed that Hillary Clinton should be locked up --  that the media "also has a responsibility to set a civil tone and to stop the endless hostility and constant negative and oftentimes false attacks and stories."

The next day, Trump returned to Twitter and continued:

A very big part of the Anger we see today in our society is caused by the purposely false and inaccurate reporting of the Mainstream Media that I refer to as Fake News. It has gotten so bad and hateful that it is beyond description. Mainstream Media must clean up its act, FAST!

Certainly the media has a role to play in this process. ... When 90 percent of the coverage about this president is negative, despite the historic successes, when ideas are perpetuated and continued of negativity, that is not helpful for the American discourse. And certainly the president is calling on everyone to come together and if you have a problem with one another, let's voice that, but let's do so peacefully and let's do that at the ballot box.

Tired language about how "both sides do it" and "we all need to tone down the rhetoric" has also been summoned up in order to create a theme of false equivalency and shared responsibility for political violence in the United States. That is absurd. Being yelled at in restaurants is not the same as attempted murder by mail bomb.

The horrific shooting of House Majority Whip Steve Scalise, R-La., by a deranged leftist was the exception that proves the rule. Since at least the 1990s with the Oklahoma City bombing through to the documented increase in hate crimes and right-wing violence spawned by Donald Trump's presidency, political violence in America has been almost exclusively unidirectional. This violence is reaching a crescendo under the environment created and encouraged by Trump and his enablers.

Donald Trump's response to what could be viewed as the attempted assassination of at least 10 prominent Democrats again shows that he is manifestly and obviously unfit to be president of the United States. Trump is incapable of embracing his constitutional role as president of all Americans, and not just the representative of those who support him without question,  give him money or finance his business operations.

Donald Trump presents a unique problem. He has repeatedly and publicly chosen to ally himself with a foreign adversary, Russian President Vladimir Putin, against the safety and security of the United States and the American people. He has encouraged violence and usurped America's democratic norms and institutions, as well as the rule of law. He has evident contempt for the U.S. Constitution and offers aid and comfort to white supremacists, neo-Nazis, and others who reject America's multiracial democracy and are willing to use violence to overthrow it. In total, this makes Donald Trump a domestic enemy, and makes the entire Republican Party complicit. Its leaders have chosen power over patriotism.

If leading Republicans in Congress were in fact willing to act as responsible stewards of democracy, they would ally with the Democrats to impeach and then convict President Trump. That remains nearly inconceivable, no matter what happens in the November elections.

Right-wing political violence is not on the horizon, nor is it a thunderstorm in the distance. It is here and now, in Donald Trump's America. In many ways these attempted mail bombings and other acts of terrorism are entirely predictable: They are important tenets of fascism and authoritarianism. For decades, the American far right has planted the seeds of violence. Now there is an attentive and eager gardener in the White House. Donald Trump should be removed from the presidency, sooner rather than later. But there is little prospect of that happening.