President Donald Trump, his eldest three children and his business have each been named in a new class action suit 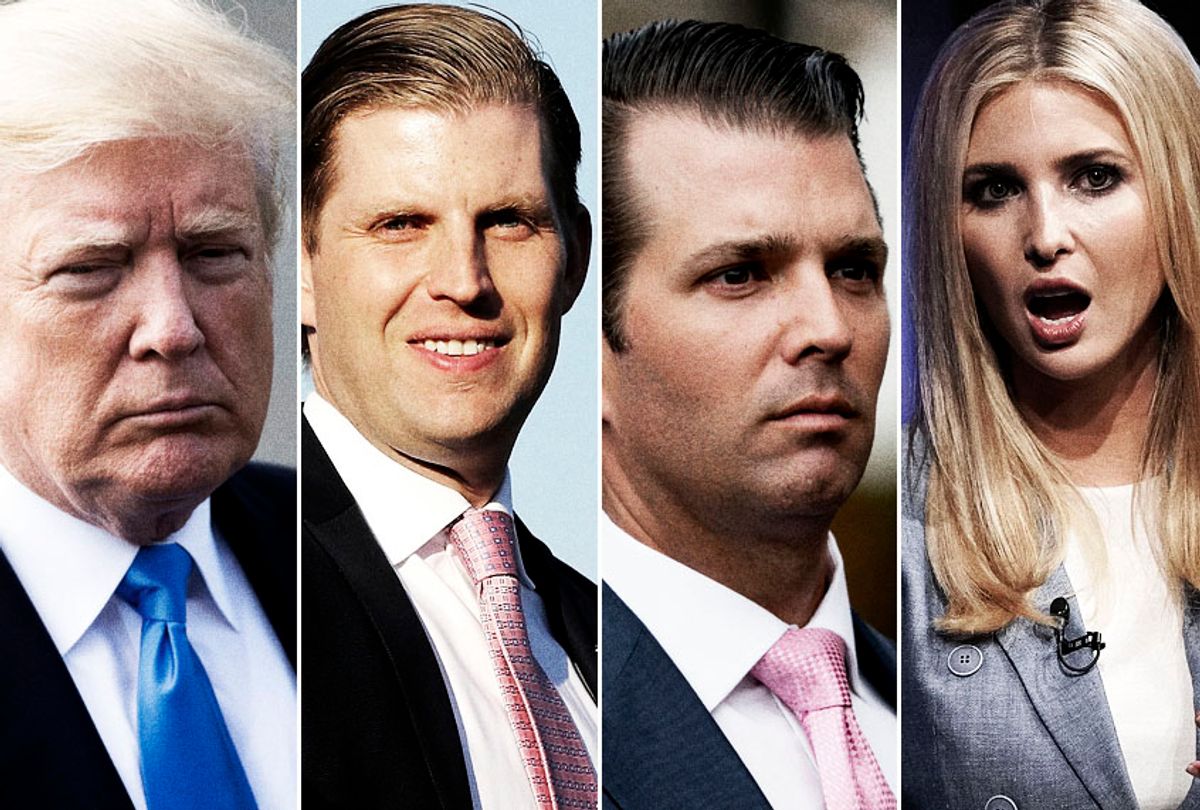 President Donald Trump, his eldest three children and his business have each been named in a new class action lawsuit that claims they Trump brand to prey on vulnerable investors to take part in fraudulent schemes, allegedly defrauding them of millions in the process.

Four anonymous individuals filed the 164-page lawsuit in Manhattan federal court on Monday accusing the Trumps of "promoting what they described as promising business opportunities with three companies in exchange for 'secret' payments: ACN Opportunity, a telecommunications marketing company; the Trump Network, a vitamin and health product marketing company; and the Trump Institute, a seminar program that 'purported to sell Trump's 'secrets to success,'" according to CNN.

The suit says the Trumps "deliberately misled" consumers about the success of their investments and lied about the fraudulent opportunities and why they supported them. Other charges claim that the Trumps engaged in "a pattern of racketeering activity" and "were aware that the vast majority of consumers would lose whatever money they invested in the business opportunities and training programs" offered by the aforementioned companies. However, the companies are not listed as co-defendants.

According to the Washington Post, the alleged schemes stemmed from "promotional spots and speeches that Trump made on behalf of marketing company ACN, also known as American Communications Network, which charged $499 for the chance to sell video phones licensed by the company and sometimes extracted thousands of dollars later to have a chance of recouping the money."

The Post's report continued: "Trump earned $450,000 each for three speeches he gave for ACN, according to his government disclosure form, but in marketing videos he told potential investors that the opportunity came 'without any of the risks most entrepreneurs have to take' and that his endorsement was 'not for any money.'"

Aside from the Trump family allegedly knowing that the investments were fraudulent, the lawsuit also accused the family of promoting the schemes, including on the president's former reality TV show "Celebrity Apprentice" — twice. The plaintiffs are seeking financial relief and a decision that blocks the Trumps from promoting similar schemes moving forward.

Alan Garten, a lawyer for the Trump Organization, seized on the timing of the lawsuit, as well as its funding from the Tesseract Research Center, a nonprofit with ties to Democratic candidates. "This is clearly just another effort by opponents of the president to use the court system to advance a political agenda," Garten said in a statement. "The motivations here are as plain as day," he added, given the timing ahead of the upcoming midterm elections on Nov. 6.

A spokesman for the plaintiff's countered the Trump Organization's assertion, telling CNN that the complaint was filed on Monday "because it is ready now." "We did a thorough investigation and a lot of legal research, and the plaintiffs are eager to file," he added. "No matter when this was filed, the Trump Org. would say it was politically motivated."

But the Trump Organization also said that "not only are the allegations completely meritless, but they all relate to events which took place nearly a decade ago and are well past the statute of limitations."

Trump stepped away from his business once entering the White House, and his sons, Donald Jr. and Eric Trump, now run the company. However, Trump still owns it, and Ivanka is a former executive at the company.

This new lawsuit recalls similar allegations of fraud leveled at the president. Trump settled three lawsuits relating to the now-defunct Trump University for $25 million a few days after the 2016 presidential election. Thousands of students of the real estate seminar were allegedly swindled out of millions of dollars, according to one of the suits.

Like Trump University, the new fraudulent investment complaint claims that the Trump brand and endorsement carried a lot of weight for working-class investors and was used to dupe them.

"Indeed, for the working people who fell prey to the Investments, the Trump endorsement was typically the first thing they learned about the investments, the reason they took an interest and the determining factor in their decision to invest," the lawsuit says, according to CNN.

One such example listed in the lawsuit is the plight of a plaintiff called "Luke Loe." "Trump's appearance in a promotional video shown to prospective ACN participants sealed the deal for Loe as a 'good moneymaking opportunity,' court filings say. At the time, in 2014, Loe was homeless and working for the Salvation Army, and unable to afford the $499 ACN registration fee. But, based on Trump's endorsement, the filings say, Loe took a $499 loan from a friend to join ACN, then attended 25 to 30 meetings, each costing $10 to $20," CNN reported.

Another plaintiff is a food delivery driver in Maryland, according to the Post, who saved up the $499 ACN registration fee over several months, after seeing the company featured on "Celebrity Apprentice."

ACN said in a statement that Trump was a "paid keynote speaker" for the company starting in 2006. Trump collected at least $1.35 million from the company, according to the Post, for two years of promotional work.

However, he also claimed to the Wall Street Journal in 2015 that he had no idea how the company actually conducted business. "I do not know the company. I know nothing about the company other than the people who run the company," Trump said. "I’m not familiar with what they do or how they go about doing that, and I make that clear in my speeches."