Take Trump seriously: His attack on birthright citizenship is for real

Now pundits are claiming Trump isn't serious about torching 14th Amendment. Have they learned nothing about him? 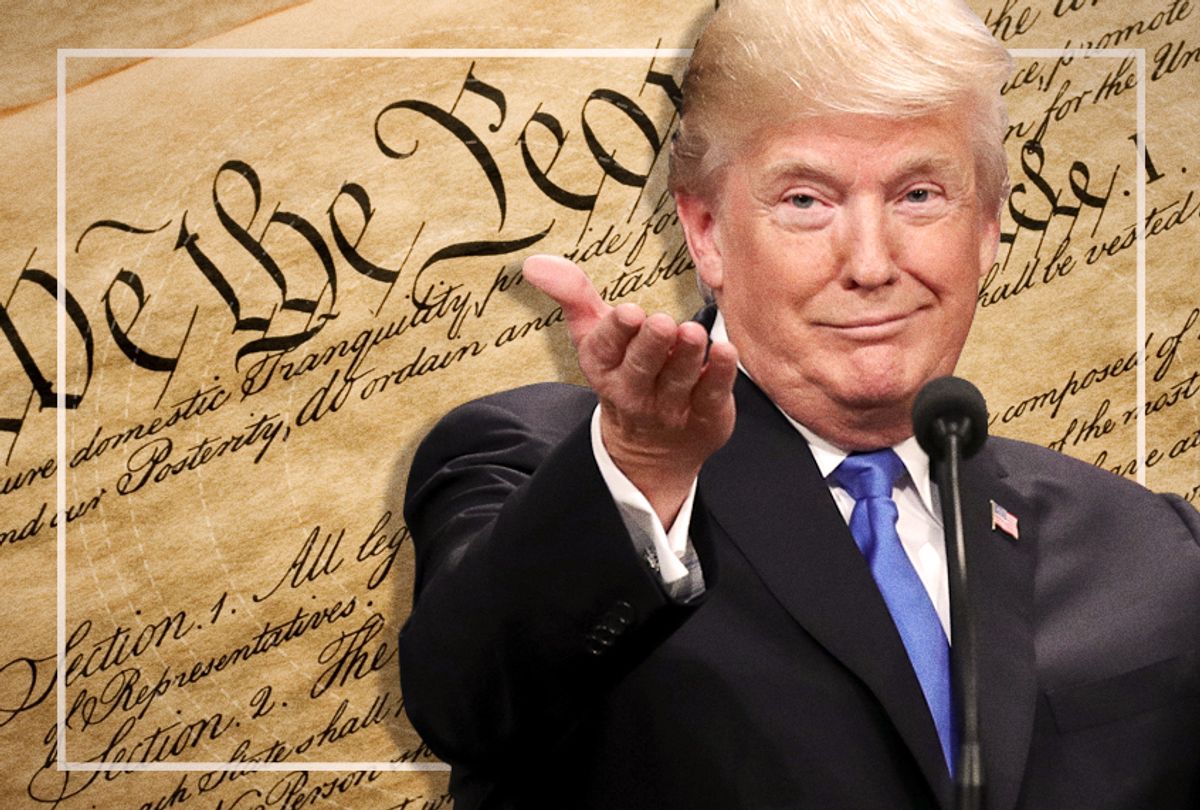 So it's come to this: Donald Trump's closing argument for the midterm campaign is to go all in on white nationalism. Tuesday morning's headlines greeted those Americans who haven't turned off their news app in despair  with the news that our president Trump is "exploring" whether he can simply gut the 14th Amendment to the Constitution — which confers citizenship on all people born in the United States — with an executive order.

This is the latest of several moves Trump has made escalating the nationalist messaging ahead of Tuesday's election, including boldly declaring himself a "nationalist" to a cheering crowd of white people and demagoguing about a group of refugees walking towards the U.S.-Mexican border, portraying people trying to flee violence as somehow the cause of violence. This racist lie led directly to a white supremacist -- who had swallowed false conspiracy theories blaming wealthy Jews for bringing refugees to the U.S. -- gunning down 11 people in a synagogue in Pittsburgh.

Trump, who is clearly indifferent to the actual causes of violence, reacted by doubling down on his demagoguery about refugees and ordering troops to meet them at the border, as if they were enemy soldiers instead of desperate families seeking safety.

Now Trump wishes to "explore" whether he can simply void out a constitutional amendment with the stroke of a pen. He justified this by telling Axios it was "ridiculous" that "a person comes in and has a baby, and the baby is essentially a citizen of the United States for 85 years, with all of those benefits."

Because of this history, a number of pundits are declaring that Trump isn't serious about this, and is just tossing out distractions for the media. David Frum of the Atlantic declared this presidential pronouncement to be "vaporware." Kevin Drum of Mother Jones argued that it has "no basis in history or reality, and there’s no reason to give it more than just the briefest dose of oxygen."

But the reality is that Trump's history shows he isn't kidding about this. As I pointed out in a piece I wrote for Rewire in the summer of 2015, Trump's campaign, from the beginning, was centered around delegitimizing the birthright citizenship of people whose families came from Latin America. Even then, Republicans like Scott Walker and Jeb Bush started using misleading terms like "anchor babies" to demonize their fellow Americans, in a late effort to appeal to the racist base that Trump was starting to amass.

It's likely that Trump's fixation on this is also intertwined with his obsession with the birth of Barack Obama. The fact that Obama's mother was a U.S. citizen has never stopped the conspiracy theorists who fixated on the idea that Obama's citizenship rights flowed strictly from his birthplace. (In fact, Obama would be a citizen even if he had been born in another country -- which, to be clear, he wasn't.) I wouldn't be surprised if Trump's determination to obliterate Obama's legacy is tied up in this.

As Paul Rosenberg explained in Salon in July, right-wing pundits have increasingly tried to push nonsensical and disingenuous readings of the 14th Amendment's text, which reads: "All persons born or naturalized in the United States, and subject to the jurisdiction thereof, are citizens of the United States." The argument is that "subject to the jurisdiction thereof" provides some wiggle room to ignore the plain meaning of the text, even though it was literally written to give previously enslaved people — whose parents, in some cases illegally smuggled into the United States, were not citizens — the right to citizenship from birth.

But the problem here is that the extreme bad faith of these arguments against birthright citizenship may not matter, as long as there are five "conservative" justices on the Supreme Court willing to distort the law and the supposedly sacred Constitution to give Trump his way. After decades of right-wing activism aimed at stack the courts with just such hacks, Trump just seated hack No. 5 on the highest court in the land, in the person of Justice Brett Kavanaugh. Reason, justice and precedent don't mean anything if the courts are packed with people who don't care about such things.

As the Washington Post detailed last week, it's become standard now for Trump to talk out of his behind and for the White House and congressional Republicans then to swing into action, trying to make good on the president's ludicrous whims. There's every reason to believe that this pattern will hold even when it comes to an assault on what once universally understood as an ironclad guarantee of our Constitution. Prior incidents when Trump was declared by cynical pundits to be pandering to his base for political effect — such as when he promised a Muslim ban or declared he would bar transgender troops from serving — did indeed become policy priorities for his administration.

No doubt the Trump propaganda troops are out there, trying to throw up dust and confuse the issue about whether or not this so-called issue is an appeal to racist sentiment. There is no reason to play that game. Trump clearly doesn't believe that there's anything wrong with birthright citizenship as it applies to white people whose ancestors came here from Europe. Trump's mother was born in Scotland, and his father's family were relatively recent German immigrants.

"I'm proud to have that German blood," Trump has said in the past. His hostility to foreign-born people who come here and have American children clearly doesn't apply to people who look like him. Birthright citizenship has suddenly become and issue now that the majority of immigrants don't belong to the category Trump considers "white."

Is there a chance that Trump is just throwing out chum, with no intention of acting on his desire to end birthright citizenship? That's possible, but we should still be alarmed by this. That would suggest that Trump's placing a serious bet that he can pull out a Republican comeback victory in the midterm elections with a platform of overt white nationalism.

As Adam Davidson of the New Yorker tweeted Tuesday, white nationalists like David Duke have long argued that "whites, by nature, would know they only want a white society," but are only thwarted from embracing this belief because they've been bamboozled by a Jewish conspiracy to shame them for this feeling. If white Americans are awakened to this reality, the racists believe, they will rally around the banner of white nationhood and eagerly support policies to reduce or eliminate the number of people of color in the U.S. Ending birthright citizenship, in this worldview, is a crucial first step.

Trump is testing this theory, and it's a safe bet he didn't come up with it on his own. His own father was arrested at a KKK riot in 1927, and he himself has long dropped hints that he believes in the pseudoscientific theories of "eugenics" kept alive by white supremacists. His son, Donald Trump Jr., has a long history of unsavory involvement with white nationalists as well.

Regardless of the eventual policy outcome, this much is clear: President Trump is openly emboldening white nationalists just days after one of them murdered 11 people in a synagogue. He is not just advancing one of their favorite ideas in public as if it were responsible policy, but is none-too-subtly signaling to the likes of David Duke and Richard Spencer that he agrees with their view that white Americans would go full-on nationalist if they only had leaders pointing the way. In just a few days, we'll find out whether this sinister gambit pays off.