Trump wants to change the Constitution by executive order

Trump feeds his base before the midterms with birthright citizenship ploy 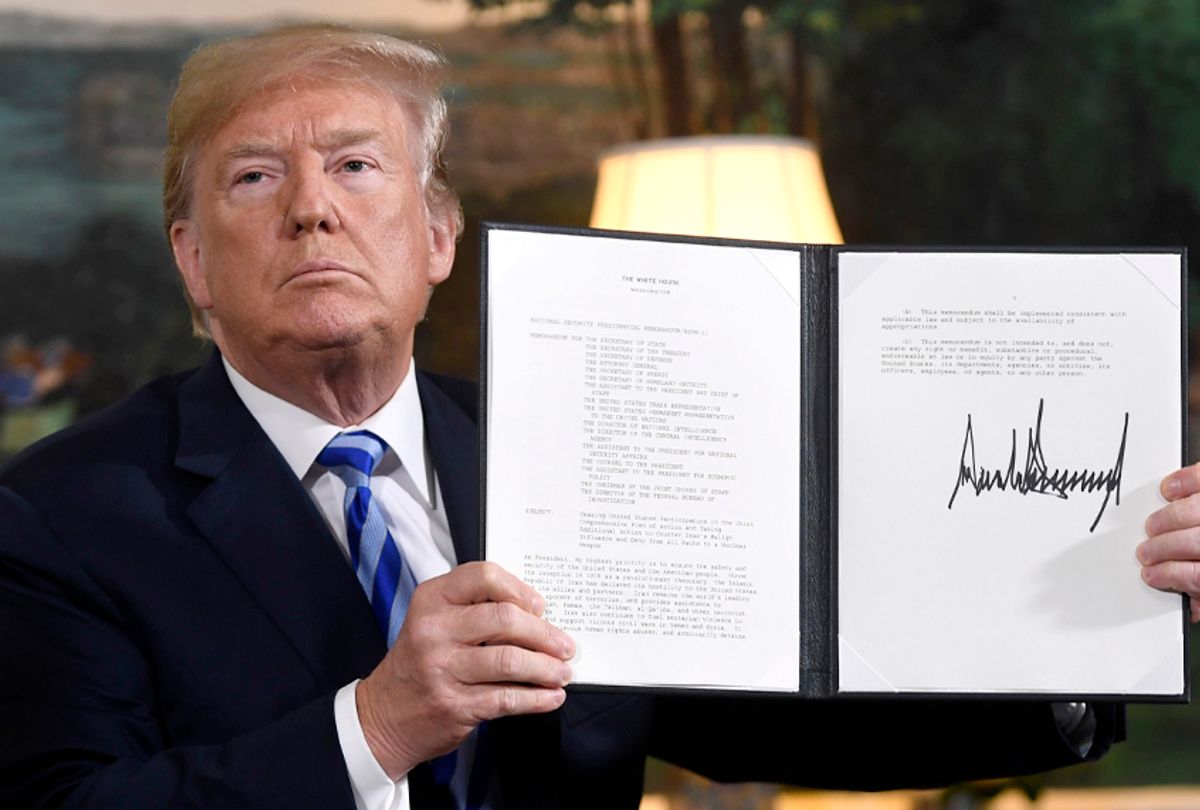 Donald Trump signs a document reinstating sanctions against Iran after announcing the US withdrawal from the Iran Nuclear deal. (Getty/Saul Loeb)
--

"It was always told to me that you needed a constitutional amendment. Guess what? You don't," Trump told "Axios on HBO." "Number one, you don't need that. Number two, you could definitely... You can definitely do it with an act of Congress, but now they're saying I can do it just with an executive order. Now how ridiculous! We're the only country in the world where a person comes in, has a baby, and the baby is essentially a citizen of the United States for 85 years with all of those benefits. It's ridiculous, it's ridiculous. And it has to end."

When he was asked when and how he planned on issuing his executive order, the president responded that "it's in the process. It'll happen. With an executive order, that's what you're talking about, right? It's a very interesting... I didn't think anybody knew that but me. I thought I was the only one."

Although opponents of birthright citizenship have claimed that the 14th amendment doesn't guarantee automatic citizenship to everyone who was born in the United States, historian Stephen Kantrowitz took to Twitter on Tuesday morning to explain how that was the intention of the men who drafted the 14th amendment.

"On birthright citizenship, read the debate in the U.S. Senate, Jan. 30, 1866. The framers of the Civil Rights Act--the immediate precursor to the 14th Amendment, and the first place national citizenship was codified--knew exactly what they were doing," Kantrowitz wrote.

He added, "They were clarifying the well-understood principle that children born in the U.S. were citizens regardless of the immigration status of their parents. They even understood this to be true for children whose parents would then have been racially ineligible for citizenship, such as the Chinese. The only people excluded from citizenship on this basis were 1) Indians under tribal government and 2) children born to the families of foreign diplomats. Read the debates. No one thought the children of non-naturalized Germans (for example) were not automatically citizens, even *before* the Civil Rights Act or Fourteenth Amendment."

As Kantrowitz also pointed out, "The only objections to this principle came from those who insisted that the U.S. had been and should remain 'a white man's government' (their words). And that vision of the U.S. was *precisely* what the Civil Rights Act and Fourteenth Amendment were intended to overturn. Again, Read the debates. It's possible to make a normative argument against birthright citizenship--I disagree with that argument, but it's possible. But there's no legitimate originalist case against birthright citizenship as formulated in 1866. As @marthasjones_ points out in another thread, the Supreme Court upheld the principle--again, with reference to then-racially ineligible Chinese persons--in Wong Kim Ark (1898)."

Fox News Research published a tweet that attacked the idea of birthright citizenship by citing statistics about how prevalent undocumented immigrant births in the United States have become.

But even that tweet notes that the number of children born to undocumented immigrants in the U.S. has been declining for over a decade.

"The president cannot erase the Constitution with an executive order, and the 14th Amendment's citizenship guarantee is clear," Omar Jadwat, director of the ACLU’s Immigrants’ Rights Project, said in a statement. "This is a transparent and blatantly unconstitutional attempt to sow division and fan the flames of anti-immigrant hatred in the days ahead of the midterms."