If Democrats run the table in five big governors' races, they can start undoing the gerrymander damage of 2010 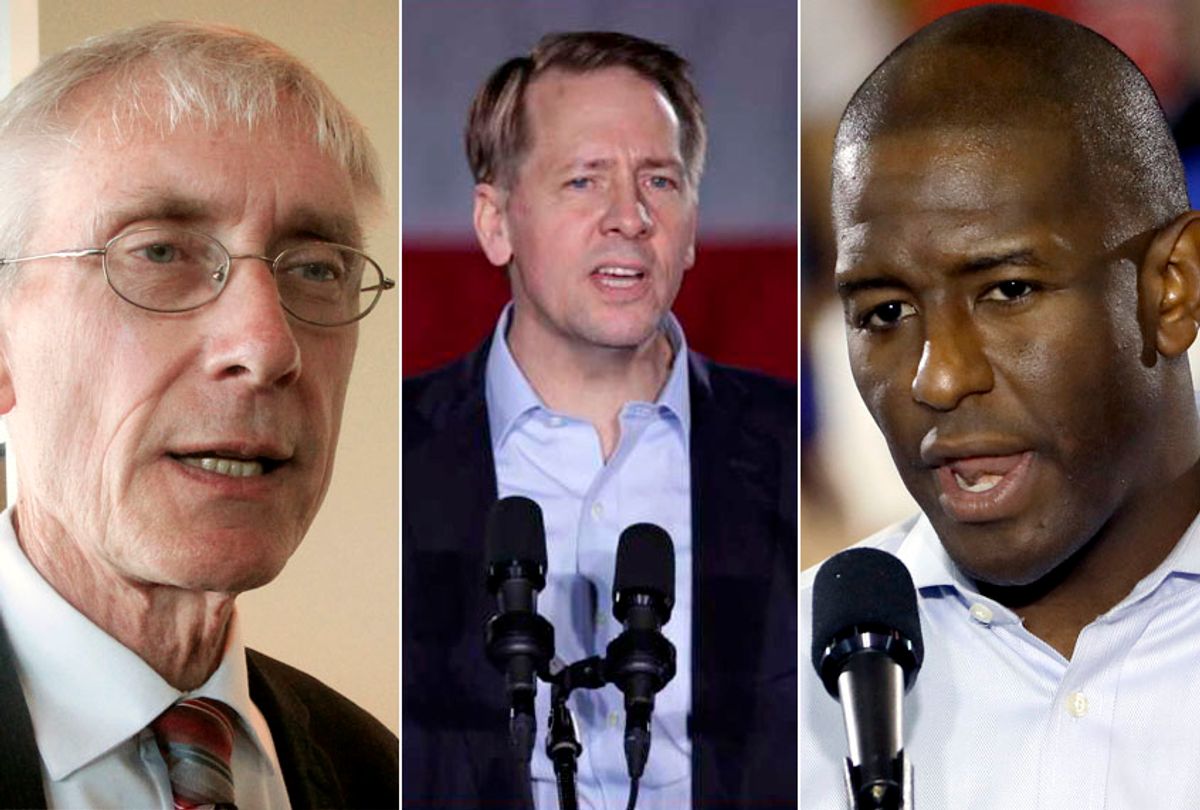 Polls show Democratic gubernatorial candidates leading in key races that could help the party reverse some of the Republican gerrymandering that followed the 2010 elections.

Democratic strategist and redistricting expert John Hagner believes that puts the party in line to reverse some of the Obama-era gerrymanders and add dozens of winnable House seats to the congressional map.

“Democrats are in good shape to win a lot of governorships in important states and be able to force through fair lines after the next census,” Hagner told Talking Points Memo, explaining that the five governorships “could yield 15 to 20 more winnable seats” and the party could add another 10 seats thanks to minority population growth in states like Texas.

“The combination of Democratic governors and reapportionment takes 25 to 30 [House] seats and makes them more winnable,” he said.

The gerrymanders, some of which have been blocked in court, have made House races an uphill climb for Democrats. While Democratic presidential candidates carried all five of the states mentioned above in at least two of the last three races, Republicans hold 49 of those states' 75 House seats. Democrats would currently need to win by at least seven percentage points nationwide to win back control of the House. If they can undo the aggressive gerrymanders in these states, they could cut that number in half.

Perhaps the two most important races in terms of gerrymandering are in Florida, where Tallahassee Mayor Andrew Gillum has a significant lead over former Republican Rep. Ron DeSantis for outgoing  Republican Gov. Rick Scott's office. Even if the Florida state legislature remains under Republican control, Gillum would have veto power over the state's next congressional district map and could force the GOP to draw fairer and more competitive maps for 2022 and beyond.

Michigan Democrats may be in an even better position. They look like they may be on pace to win the governor's mansion and one or both legislative chambers. Furthermore, an anti-gerrymandering ballot initiative that is expected to pass would drastically alter the state's current congressional map. Nine of Michigan's 13 House seats are currently held by Republicans.

In Wisconsin, where state schools superintendent Tony Evers holds a slight lead in the polls over incumbent Republican Gov. Scott Walker, Democrats have a strong chance to win one of the legislative chambers and a slight chance to win both by 2020. “A fair map could turn the current five-to-three GOP edge into a four-to-four split, and a Democratic gerrymander, which is unlikely, could even produce a one-seat Democratic advantage,” writes TPM's Cameron Joseph.

Pennsylvania's previously Republican-gerrymandered map was already thrown out by the state Supreme Court earlier this year, but winning the governor's race and a large number of state legislature seats would go a long way to solidifying their majority for a long time.

Virginia's Republican gerrymander has also been watered down in court, but further Democratic gains could turn the GOP's current seven-to-four U.S. House majority into a map where both sides have five safe seats, with the two others remaining competitive.

Democrats are also in line to add one to two congressional seats in Georgia if Democrat Stacey Abrams can win her neck-and-neck gubernatorial race against current Secretary of State Brian Kemp, and several more in Illinois, where Democrats appear likely to win back unified control of the state. Democrats also have a chance to win unified control in Colorado and Minnesota, where they can draw maps that give them an advantage.

Meanwhile, even in a deep red state like Kansas, a Democratic win against Republican Kris Kobach -- which remains possible, although not likely -- could prevent state legislators from drawing congressional districts that make them unwinnable for Democrats.