Has the GOP finally had enough of Steve King's blatant racism?

Republicans may finally be turning their backs on the most overtly racist member of Congress. It took way too long 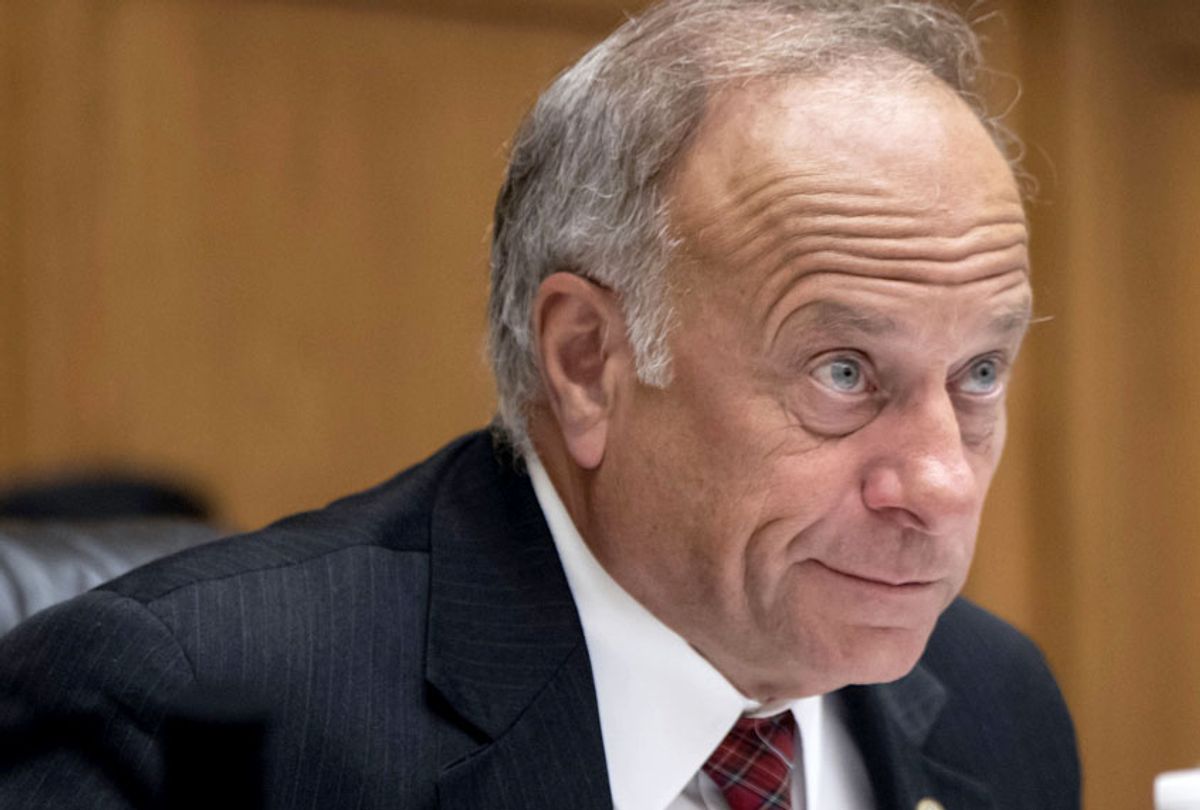 Rep. Steve King, the Iowa congressman with a long record of racist and xenophobic positions and rhetoric, is finally being repudiated by the Republican Party. But  only because he told the truth.

King has espoused apparent white nationalist views views since first winning election on an “English-only” platform 16 years ago. But it wasn’t until Tuesday, one week before the crucial midterm elections and one day after a shock poll showed King leading his Democratic challenger by only one point, that a Republican colleague finally saw fit to call him out.

Every time Republicans have had to clean up after King, whose entire political career is based on an overt appeal to deep-rooted white bigotry, they have never described his positions or statements as racist. Not one prominent Republican strongly denounced King’s 2013 statement that undocumented students had “calves the size of cantaloupes” because they had crossed the border as drug mules. Republicans stood silently during the 2016 election when he said only white people had made meaningful contributions to human civilization.

Republicans looked the other way when it was revealed that King keeps a small version of the Confederate flag on his desk. For the record, the state he represents fought with the Union during the Civil War: Iowa had a higher proportion of its adult male population serve in the Union Army than any other state, and more than 13,000 Iowans died in the historic conflict that ended slavery.

When King insisted just last year, “We can't restore our civilization with somebody else's babies" -- making clear that he opposes all immigration, not just people who cross the border illegally -- Republican condemnation amounted to a collective shoulder shrug.

Contrary to some reports, in fact, Republicans weren’t even moved to publicly denounce King after it was revealed that he recently met with a far-right Austrian political party with ties to the Nazis. There was no condemnation from GOP leadership after King tweeted his support for a white supremacist politician in Canada on Oct. 17. It wasn’t until reporters like Alex Kotch and Judd Legum began to question King’s corporate sponsors, leading companies like Land O’Lakes, Purina, and Intel to cease funding his campaign, that Republican leaders finally called King what he is: a white supremacist.

The Sioux City Journal editorial board, which has endorsed King in each of his previous campaigns, had already endorsed his Democratic opponent, J.D. Scholten, by the time National Republican Congressional Committee chairman Rep. Steve Stivers, R-Ohio, rebuked King on Twitter Tuesday afternoon. Scholten followed that up by announcing on Wednesday that he had raised $350,000 from more than 7,500 donors in one day.

Republicans always whine about being unfairly labeled as racist. That has even been posited as the reason why Donald Trump was elected in 2016: If only coastal elites, with their fancy college degrees and calls for diversity, hadn’t bullied and intimidated Trump voters, then none of this would have happened. Hours before Stivers won praise for his belated denunciation, King posted Halloween costume ideas mocking diversity on Facebook.

There is nothing unfair about the charges of racism thrown at the GOP. And Republicans didn't just tolerate King or look the other way; they embraced him, even granting him a kingmaker role in presidential politics. Nearly a dozen Republican hopeful traveled to Des Moines for King's “Iowa Freedom Summit” in 2015, and King ended up serving as Ted Cruz’s campaign co-chair before, of course, pivoting to Trump.

It's not as if the Republicans' race problem is limited to Steve King. Stivers himself was forced to defend the NRCC’s ad depicting George Soros as a Democratic puppetmaster, a common anti-Semitic trope, just one day after a white supremacist shot 11 people at a synagogue in the largest hate crime perpetrated against Jews in U.S. history. That ad is still on the air, a week after Soros was targeted with an IED sent to his home by the so-called MAGAbomber. The campaign arm of House Republicans also came under scrutiny earlier his year for ads attacking a black Democratic candidate who released a rap mixtape criticizing white supremacy. Republicans called his lyrics “anti-American.”

Republican candidates, be they so-called moderates or conservatives, have employed even more overt racial provocations in their own campaign advertisements this cycle.

New Jersey Rep. Tom MacArthur described his Korean-American Democratic opponent as “Real Fishy” using a typeface called “Chop Suey.” Indicted New York Republican Rep. Chris Collins picked on his opponent’s Korean-American wife to suggest he wants “fewer jobs for us … more jobs for China and Korea.” Another indicted GOP member of the House, California’s Duncan Hunter, released an ad accusing his Democratic opponent, who is of Latino and Palestinian heritage, of “working to infiltrate Congress” and baselessly claimed he was “funded by the Muslim Brotherhood.”

Former Republican Rep. Ron DeSantis, who left the House to run for Florida governor, told Fox News viewers after winning his primary that the voters shouldn’t “monkey this up” by electing his Democratic opponent Andrew Gillum, who is black. The GOP’s nominee for the Senate in Virginia is a neo-Confederate, and the party's Senate nominee in Minnesota once compared former first lady Michelle Obama to a "chimp."

Maybe that's the case. But if Republicans are serious about purging overt racism from their party, they'll have to prove it on Election Day.