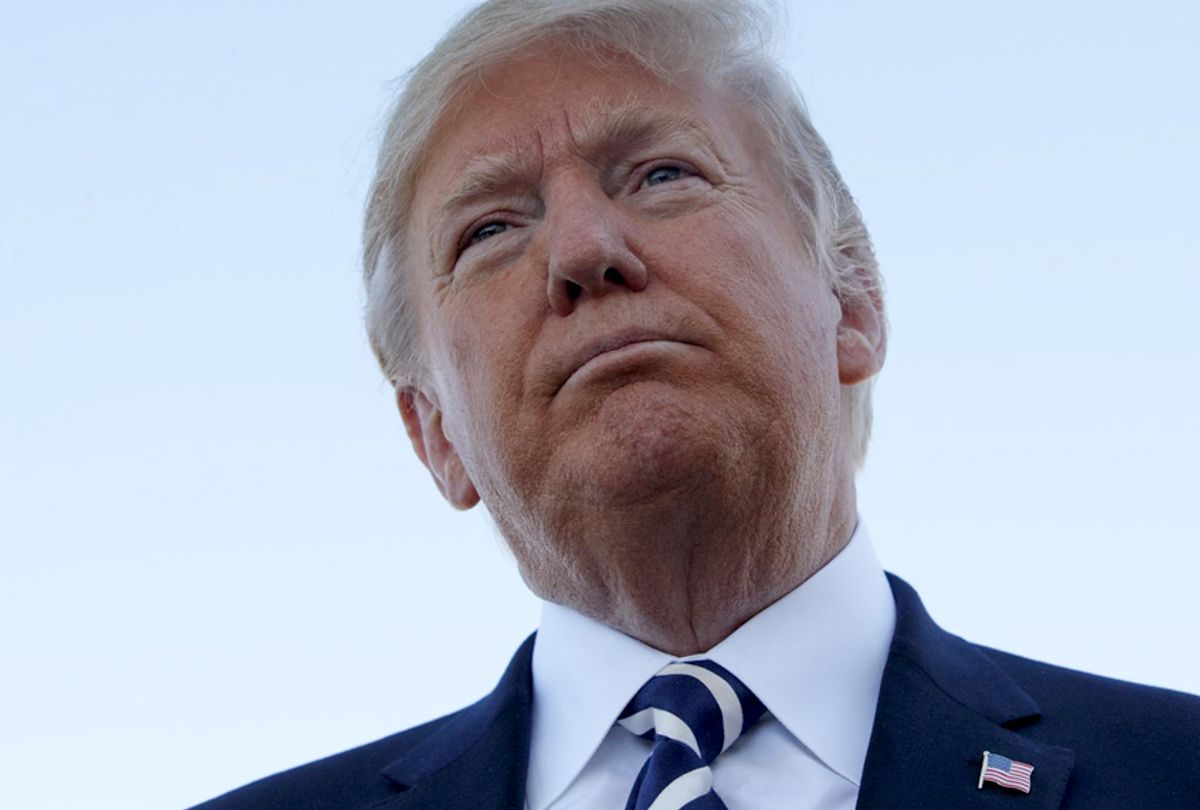 Even though a number of politicians, including Pennsylvania's Republican Senator Pat Toomey and GOP members of the House, refused to join Donald Trump and many Jewish leaders didn't want him to go, the president appeared in Pittsburgh on Tuesday amidst protest to commemorate the 11 victims of an anti-Semitic synagogue shooting on Saturday.

Instead, the president was joined by his son-in-law Jared Kushner, his daughter Ivanka and his Secretary of the Treasury Steven Mnuchin, all of whom are Jewish, according to CNN. During his trip to Pittsburgh, the president visited the Tree of Life synagogue and joined First Lady Melania Trump in lighting a candle in a vestibule honoring the 11 victims who died during the shooting that authorities believe was perpetrated by an anti-Semite named Robert Bowers. Trump and his wife also placed stones on Star of David memorials that had been set up for each of the victims, in addition to putting white roses on them.

One block away, hundreds gathered in protest.

Pittsburgh young Jews are leading a coalition to join with @bendthearcpgh to say loud & clear together:#NotThisTime.

We will not be political props for white nationalists.

After visiting the memorial at the synagogue, Trump went to the hospital to talk with police officers who had been wounded while stopping Bowers' rampage, the widow of one of the victims of his rampage and others. White House press secretary Sarah Huckabee Sanders later told reporters that the widow of Richard Gottfried, who was killed during the synagogue shooting, wanted people to know that there were individuals in Pittsburgh who wanted the president to be there. Sanders added that the president had shown up to pay his respects on behalf of the country.

During the event, Trump was overheard saying "Very sad. Very very sad. Hopefully, we will learn a lot from what happened," according to CNN. Yet as he made his appearances at the synagogue and hospital, protesters appeared to march and express their dissatisfaction with his presence there. Some held up signs saying "Words Matter," "Strength through Unity," "Watch Your Words" and "Hate does not work in our Neighborhoods."

A number of Jewish leaders also told Trump prior to his trip to Pittsburgh that he would not be welcome, writing in a letter that "for the past three years your words and your policies have emboldened a growing white nationalist movement. You yourself called the murderer evil, but yesterday’s violence is the direct culmination of your influence. President Trump, you are not welcome in Pittsburgh until you fully denounce white nationalism."

Perhaps anticipating this response, a number of major political figures did not join Trump. Senate Majority Leader Mitch McConnell, Senate Minority Leader Chuck Schumer, Speaker of the House Paul Ryan and House Minority Leader Nancy Pelosi all declined to join Trump, with McConnell and Ryan both claiming they had scheduling conflicts. One of Pennsylvania's two senators, Republican Pat Toomey, also pointed to a scheduling conflict as a reason for not joining Trump, while the other senator, Democrat Bob Casey, said he wasn't invited to join Trump. Pittsburgh's own mayor, Bill Peduto, declined to join the president, with his communications director Tim McNulty saying that "Mayor Peduto's sole focus today is on the funerals and supporting the families."