Kanye infuriated his fan base when he cozied up to Donald Trump. Now he claims he was "used" 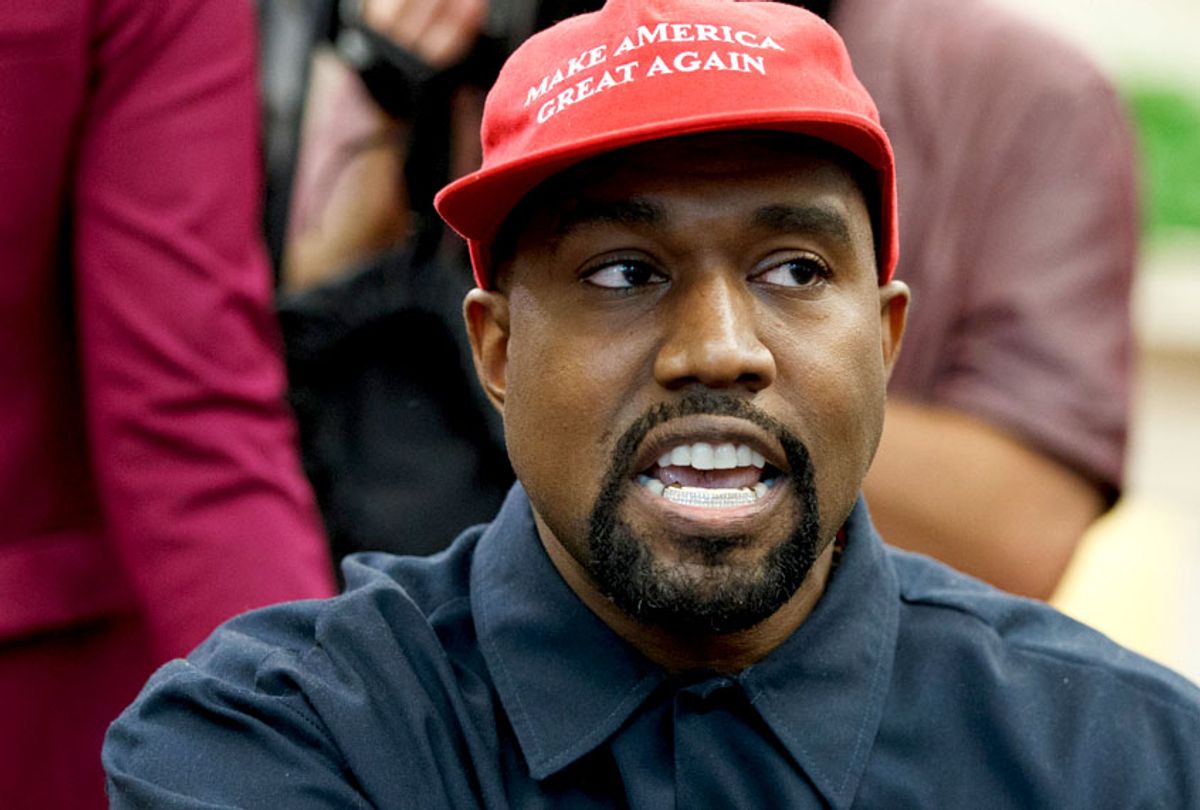 Yesterday the 41-year-old self-proclaimed genius, who promotes himself as a “free thinker,” announced on Twitter that he is distancing himself from politics. “My eyes are now wide open and now realize I’ve been used to spread messages I don’t believe in,” West wrote.

This comes only a few weeks after his extremely obnoxious and confusing White House Oval Office visit with President Donald Trump with ex-football star Jim Brown, where he unleashed a long rant on abolishing the 13th amendment, racism, the problems with being a Democrat, outer space and the power of his crinkly-bent MAGA hat, of which he said, “you know, they tried to scare me to not wear this hat, my own friends, but this hat, it gives me power in a way."

“It was something about when I put this hat on,” West said to Trump. “It made me feel like Superman. You made us Superman, that’s my favorite superhero, and you made a Superman cape for me.”

West also pivoted on his affiliation with "Red Pill Black" Republican darling Candace Owens, tweeting that he has nothing to do with Blexit, her movement to encourage Black people to leave the Democratic party.

Owens issued a statement about the controversy today. In a blog post titled "808s and Heartbreak," she guilt-tripped West for throwing her under the bus and apologized to Trump for the drama. She also disputed the accusation that she had used West's name to further her cause:

I never once said that Kanye designed the t-shirts for BLEXIT. This is a lie that seems to have made its way around the world; a lie I would like to again correct for the record. Kanye was completely right to feel used in that regard and as I have done personally, I would like to publicly apologize to him for any undue stress or pain the effort to correct that rumor has caused him, his business relationships, or his family. He simply never designed them.

I personally don’t trust West's statements for a number of reasons. The first is that while he was quick to mention Owens, an up and comer whose platform size is a fraction of his, he neglected to say anything specific about Trump — opting instead for statements supporting gun control, as well as refugees and migrants — making it seem like he doesn’t want to find himself on the president’s bad side. That means either West isn't committing to taking the costume all the way off, or this is just another one of his tricks.

And second, his words sound nice — like a real apology, even — but he's pulled this stunt before. Remember what happened after his first meeting with Donald Trump back in December 2016? West got everyone riled up about meeting with President-elect Trump before the photos of him sporting speckled-blond hair, side by side with Donald at Trump Tower, surfaced, infuriating many in the hip hop community. Then he immediately abandoned all political talk — after he dropped a series of seven-song albums he produced by Nas, Pusha T, Teyana Taylor and Kid Cudi, as well as his own, "I Hate Being Bipolar, It’s Awesome."

West has announced that he plans to release another studio album, "Yandhi," in November, so now seems like the perfect time to get people talking again.

But the main reason I don’t trust Kanye’s tweet is simple: declining Yeezy sales. West has worked extremely hard to build one of the most sought after brands in sneaker history. Just a year ago in every major American city, it wouldn’t be strange to see groups of  hungry sneakerheads camping out for Yeezys — pitching actual tents in front of sneaker stores and sleeping outside for days, just to get a pair of his $200 sneakers. Some wore his shoes with pride while others resold them on eBay and sneaker sites for prices that could reach over $1,000 per pair. This weekend, Adidas, the brand that took over Yeezy after he parted ways with Nike back in 2014, released the YEEZY BOOST 700 in a Mauve colorway, and for the first time in history the shoe did not sell out. I’m no business expert, but I know sneakers and trends. Clearly, this fast decline of the brand should make Kanye and investors very scared.

How do you see a brand of shoes go from "sleep on the ground" hot to readily available on the shelf? Endorse the most toxic politician in recent American history, that’s how.

Affiliating with Trump meant Kanye basically sacrificed his valuable cool. Sexual assault, race-baiting and lying on Twitter and TV every day is not cool. The MAGA hat crowd — with their chunky no-name sneakers, Confederate belt buckles and folded work boots — is not cool, either, nor do they seem too interested in buying Kanye's $200 sneakers, especially since Trump has yet to get them back to work. So I think West panicked. Scared of losing all of his money, now he’s running to the center and is probably going to be playing fake black revolutionary again pretty soon.

So before you think about welcoming him back with open arms, remember that he posted this photo of his kid in a MAGA hat just a few hours before he went on his little eye-opening rant: