A rising tide of hate: In the Trump Era, the American political climate has become increasingly toxic 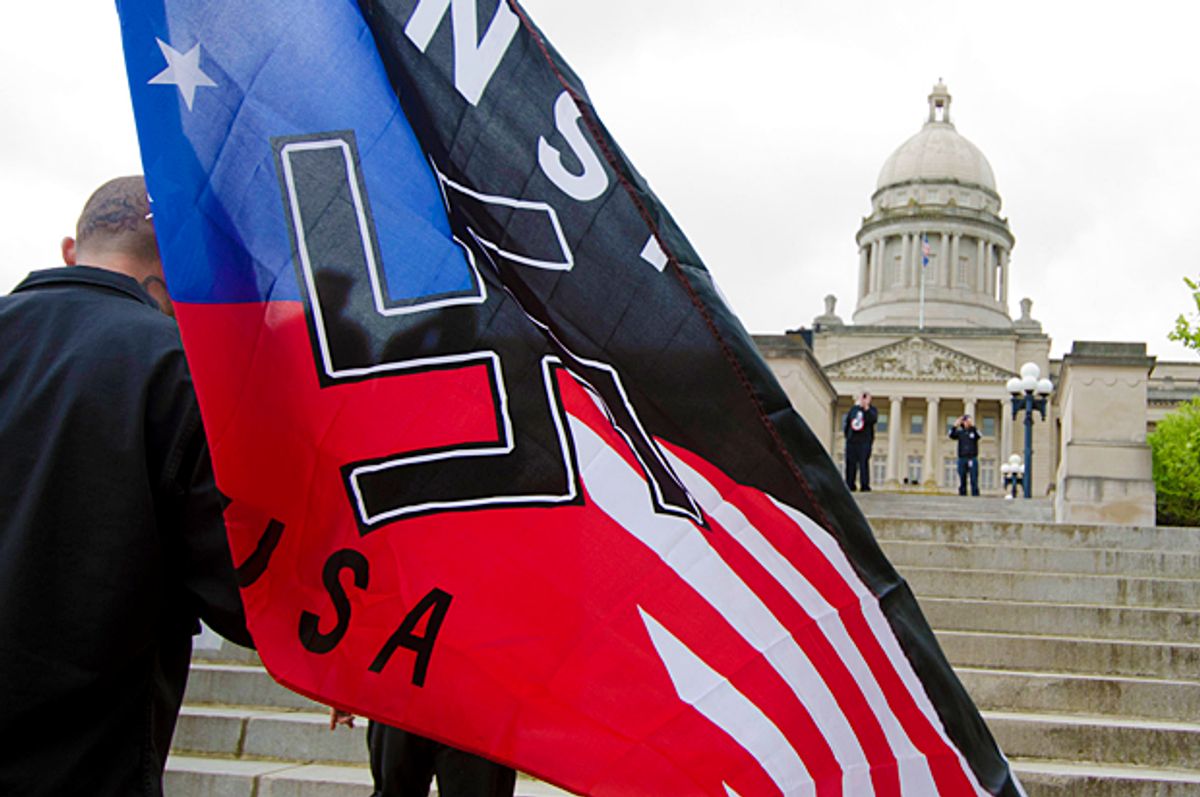 No sooner was a fanatical Donald Trump supporter in Florida arrested on suspicion of carrying out a terrorist mail bomb campaign against prominent Democrats than a mass shooting occurred at a synagogue in Pittsburgh—and this is on top of the random killing of two older African-Americans at a supermarket in Louisville, Kentucky on October 25. White nationalism is out of control in the U.S., asserting itself not only with acts of domestic terrorism, but also, with everything from the intimidation of non-white early voters in Texas to the harassment of black politicians. In the Trump Era, the American political climate has become increasingly toxic—and even when white nationalists aren’t actually resorting to violence, they are finding ways to intimidate, harass and bully people of color.

1. Mass Shooting at Pittsburgh Synagogue on October 27 is Worst Anti-Semitic Attack in U.S. History, According to ADL

According to Jonathan Greenblatt, national director of the Anti-Defamation League (ADL), the vicious attack on a synagogue in Pittsburgh on Saturday, October 27 was the deadliest anti-Semitic attack in U.S. history. Eleven people were fatally shot, and seven others were injured. An FBI affidavit quotes the man arrested for the act of terrorism, Robert Bowers, as saying, “I just want to kill Jews,” and Bowers had posted numerous anti-Semitic slurs on the Philadelphia-based alt-right social media platform Gab.

In an October 28 appearance on NBC’s “Meet the Press,” Greenblatt described the attack as a reflection of the toxic political climate of 2018—asserting, “Political candidates and people in public life now literally repeat the rhetoric of white supremacists. They think it’s normal and permissible to talk about Jewish conspiracies, manipulating events or Jewish financers somehow controlling activities.”

2. Pipe Bombs Mailed to Democrats Was a ‘Coordinated Attempt at Mass Assassination’

Only a day before the anti-Semitic mass killing in Pittsburgh, Florida resident Cesar Altieri Sayoc was arrested on suspicion of mailing pipe bombs to a long list of major Democrats—including Bill and Hillary Clinton, Barack and Michelle Obama, billionaire investor George Soros, former Vice President Joe Biden and actor Robert De Niro. Washington Post columnist Jennifer Rubin correctly described the pipe bombs as a “coordinated attempt at mass assassination,” whereas Rush Limbaugh, Ann Coulter, Lou Dobbs, Newsmax’s John Cardillo and other far-right commentators insisted that the U.S. was seeing a “false flag” operation meant to defame Republicans and boost Democrats. But Sayoc, an ardent Trump supporter, is no fan of Democrats: the anti-Democrat signs in his van made it obvious that he hated them with a passion.

In Louisville, Kentucky, 51-year-old Gregory Bush is facing murder charges in connection with the random killings of two older African-Americans (67-year-old Vickie Lee Jones and 69-year-old Maurice Stallard) at a Kroger supermarket on Thursday, October 25. Bush had a long history of racism, and only a few minutes before those shootings, surveillance footage showed him trying to forcibly enter an African-American church. Billy Williams, administrator for the First Baptist Church, was quoted as saying, “I’m just thankful that all of our doors and security were in place.”

4. Voter Intimidation in Texas Is the ‘Worst in 30 Years’

Although Election Day is still a week away—Tuesday, November 6—early voting in the 2018 midterms is already underway in some states. And according to Toni Pippins-Poole (election director in Dallas County, Texas), reports of voter intimidation at polling places in her area are the “worst in 30 years.” The Texas Civil Rights Project is also reporting a sharp increase in incidents of voter harassment aimed at “women of color” at polling places, and the incidents have ranged from wingnuts yelling insults at voters outside of polling places to non-white voters being aggressively questioned about their politics while waiting to vote.

5. Vermont’s Only African-American State Congresswoman Resigns Due to Racial Harassment

On September 25, Democrat Ruqaiyah “Kiah” Morris — the only African-American woman serving in Vermont’s house of representatives—announced her immediate resignation due to incidents of racial harassment, including home invasions and swastikas being painted on the trees outside her home. Morris has already announced in August that she wouldn’t be seeking reelection, but she planned to complete her term (which ends in 2019). However, because of “continued harassment,” Morris changed her mind and opted to resign immediately.

In Georgia, one is not only seeing a racist voter suppression campaign by Brian Kemp—the Republican running against Democrat Stacy Abrams in 2018’s Georgia gubernatorial race—but also, incidents of racial harassmentat Abrams’ events. TheRoot.com reported, in September, that several members of the Nationalist Liberty Union (a racist group) crashed one of her events, waving pro-Kemp signs and harassing Abrams supporters. And one of them was James J. Stachowiak, an anti-Muslim activist and white nationalist who has made death threats against Black Lives Matter. Holding a bullet in one of his videos, Stachowiak said, “BLM, I’ve got a round with your name on it.”