After my abortion I felt relieved — and I'm in the majority 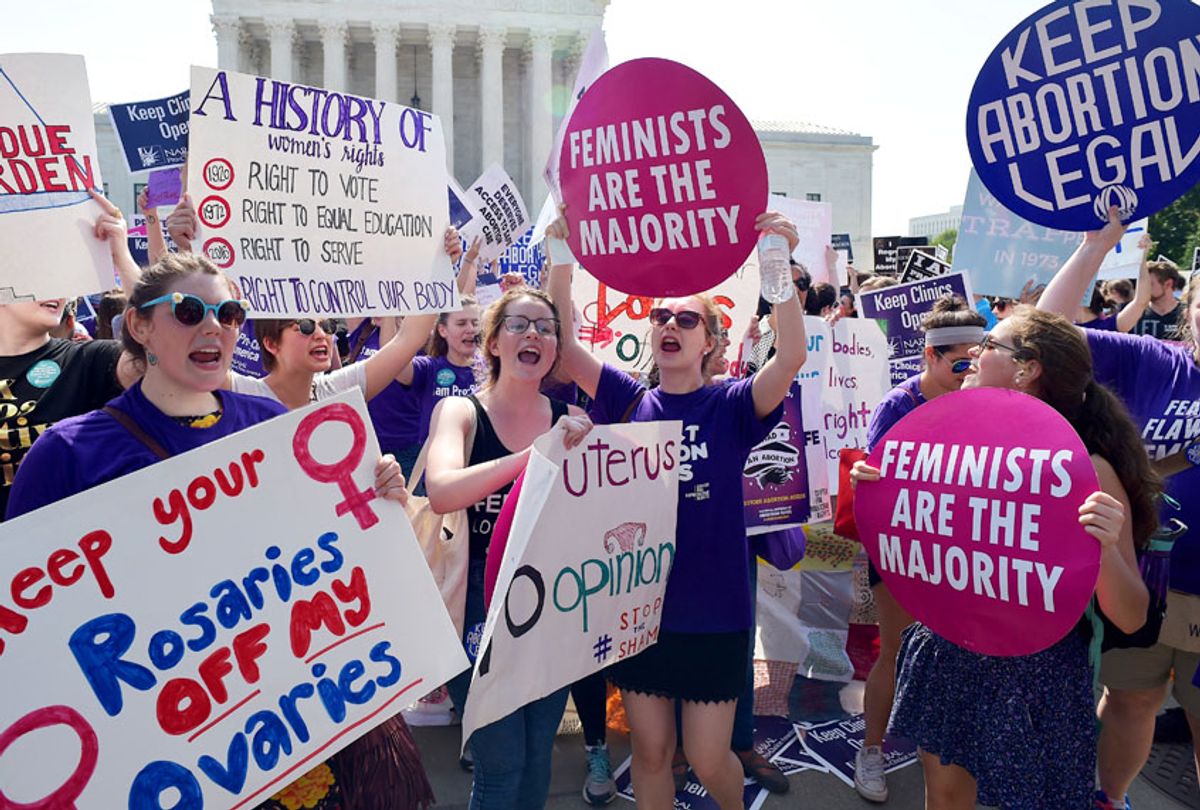 Abortion rights activists cheer after the US Supreme Court struck down a Texas law placing restrictions on abortion clinics, outside of the Supreme Court on June 27, 2016 in Washington, DC. (Getty/Mandel Ngan)
--

Excerpted from "Shout Your Abortion," edited by Amelia Bonow and Emily Nokes to be published by PM Press in November 2018. Copyright © 2018 by Lindy West. Used with permission of PM Press.

In September 2010 I took one pill, then another, and lay in my bed for a night and a day, and then I wasn't pregnant anymore. It was a fairly smooth experience, distressing only because my relationship was bad and I had no money. The procedure itself was an unqualified relief.

I know that's startling for some people to hear — we are conditioned to speak about abortion with reverence and a bit of melancholy, if we speak about it at all. But feeling relieved after my abortion didn't make me part of some radical vanguard, it made me utterly mundane. A full 95 percent of people who have abortions report feeling that they made the right decision. My relief didn't just place me in a majority; it placed me in a super-majority. I am part of the 95 percent. And 95 percent, as any fifth-grader can tell you, rounds up to pretty much everyone.

That's not to say that stories more complex or painful than my own — stories of trauma, of abuse, of malpractice, of confusion, of impossible decisions — are unimportant. They are real, valid, vital threads in the vast tapestry of human experience. The fact that abortion stories are not a monolith is an indication, surely, that abortion shouldn't be treated like one. We cannot legislate away regret; all we can do is empower every human being to make informed, sovereign decisions over their own lives.

There's a reason why rape is a tool of war. When you take away a community's ability to control reproduction, you take away its ability to conserve resources, to act instead of react, to focus on building for the greater good (the future) rather than scrabbling to sustain new life (the present). On an individual level, those who are forced to bear children are denied the ability to lead self-determined, fully realized lives. Rape is a weapon of mass destruction because forced birth obliterates the notion of freedom.

At the time of this writing, abortion has been legal in America for 45 years, and one in four people who can become pregnant will have an abortion at some point in their lives. Contrary to what the pundit economy would have you believe, abortion is not particularly controversial. According to the Pew Research Center, nearly 70 percent of all Americans oppose overturning Roe v. Wade, while 75 percent of Democrats believe abortion should be legal in all or most cases. These are not numbers that indicate controversy.

And yet, in spite of those numbers, abortion bans and restrictions have been shuttering clinics at an unprecedented rate, leaving seven states with only one clinic, and 90 percent of counties in America with none. Regardless of legality, access to abortion simply does not exist for millions of Americans. Beyond that, the Trump administration is one dead or retired Supreme Court justice away from obliterating the right to abortion by overturning Roe v. Wade.

How did we find ourselves in a place where abortion access is being regulated in a way that is so profoundly out of step with public opinion? The answer is relatively simple: those who oppose abortion rights have dominated the conversation by framing abortion as murder. The Left has never figured out a compelling way to advocate for abortion rights, because the anti-choice movement has relentlessly flooded the discursive field with so much propaganda that even those who support abortion rights often do so from an apologetic stance. Those seeking to regulate reproductive freedom have intentionally created a cultural climate where talking openly about having had an abortion is a liability that most people are understandably unwilling to accept.

We cannot effectively advocate for abortion in the abstract. Abortion is good for women, families, and communities, and the proof is reflected in our own lives. Many of us have our careers or our children because of our abortions. Some of us would have never survived our abusers or our addictions without our abortions. One in four of us have had lives that were determined in monumental ways by our abortions, and the vast majority of us do not regret our decisions. But if nobody will admit they've had an abortion, we aren't able to illustrate the connection between having an abortion and living a better life.

We have to keep pushing these conversations outside of liberal urban centers and social media silos. During the great post-2016-election blame game I read an article in Vox called "Everything Mattered" by a writer named David Roberts. He argued that, in the midst of all the fog, resentment, and disinformation, there was one undeniable defining factor behind Donald Trump's "win": entrenched partisanship. About 90 percent of self-identified Republicans voted Republican, and 89 percent of Democrats voted Democrat. People voted for Trump against their interests, against their better judgment, against their values. Roberts wrote:

Clinton bet most of her chips on there being some floor, some violation of norms too low even for today's radicalized Republican Party. She thought responsible Republican officeholders would rally. She thought at least well-off, well-educated Republican women would recoil in horror. She was wrong. There is no floor. Partisanship has been revealed as the strongest force in US public life—stronger than any norms, independent of any facts.

This country is ours just like our bodies are ours. Telling our abortion stories is a form of resistance.

Without abortion we are not free. We need to work to build a culture in which talking about abortion becomes as normal as the procedure itself. Then we can begin to communicate the truth to the people in our lives who don't yet understand what we already know: people who have abortions are good people and abortion has helped millions of us live our best lives.

We are not sorry.