Republicans can't run on policy, because voters hate it. So they've run a racist and purely negative campaign 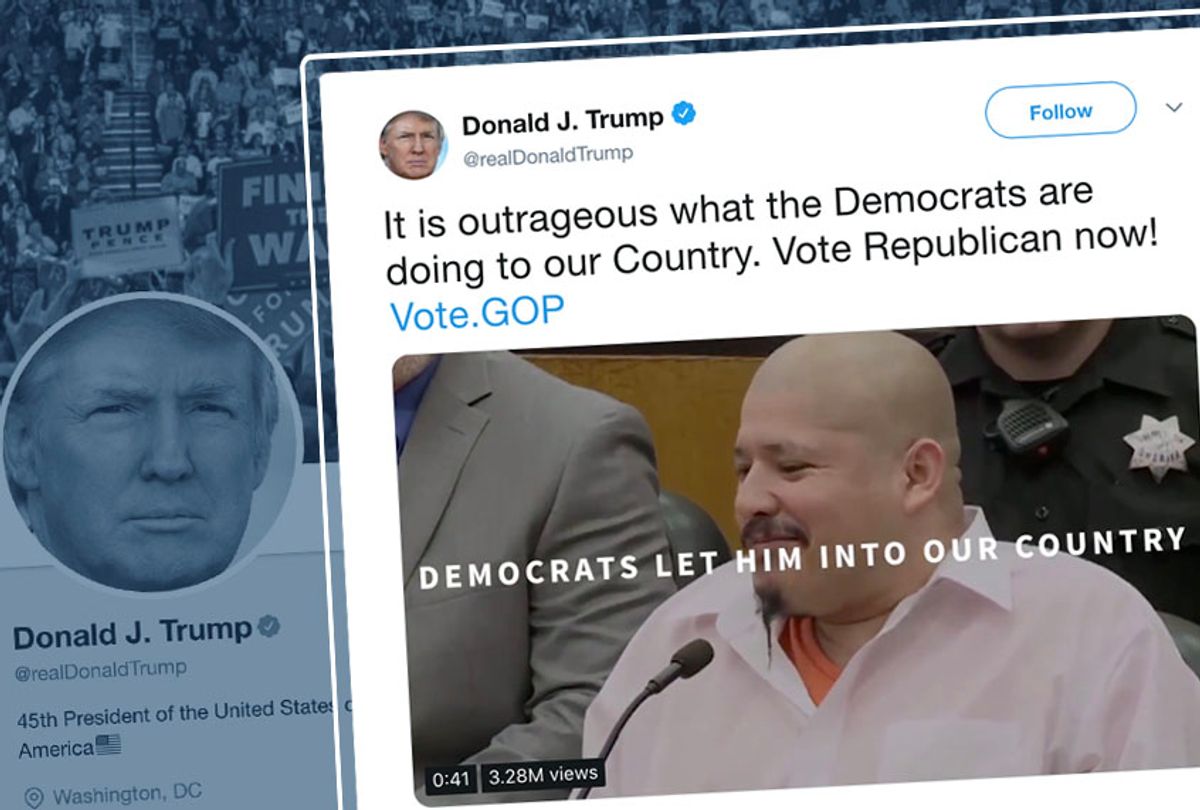 Republicans have nothing to offer voters. That's the main takeaway from these last days of the election season, when the final push — led by Donald Trump and Fox News — to get Republican voters to the polls isn't focused on policies or campaign promises, but purely on anger, spite and fear.

The GOP argument in these last days is not about the tax cuts or the widespread deregulation, because those are broadly unpopular positions. It's about telling core Republican voters -- mostly older white people -- that immigrants are coming to kill them, scary leftists called "antifa" want to smash everything and "political correctness" is coming to steal their free speech.

It's all a lie, of course. But hey, it's not like Republicans can pile up the votes by bragging about how they want to gut social spending so that billionaires can buy more yachts.

On Wednesday, the Republicans released an ad — tweeted out immediately by Trump — that's so breathtakingly racist that even CNN was willing to avoid euphemisms like "racially charged" or "loaded" and simply ran a headline that read, "Trump shocks with racist new ad days before midterms." (The text of the article was not so bold, relying heavily on euphemism.) The ad openly equates refugees from Central America who are fleeing gang violence with a Mexican immigrant named Luis Bracamontes, who was convicted of murdering two California deputies.

There is no other word but "racism" for something like this. Bracamontes is obviously an unhinged criminal, much like white remorseless killers like Jeffrey Dahmer or Ted Bundy, and the legal system dealt with him appropriately, by convicting him for murder instead of deporting him back to Mexico, quite likely to kill again. Literally, the only reason to compare him to the people in the caravan — who are largely from Guatemala, Honduras and El Salvador rathe than Mexico, and who are trying to flee gang violence (or state violence) in thos countries — is a belief that all Latinos are the same. Which makes exactly as much sense as saying all white people are Ted Bundy.

But this ad is just an extension of a Republican campaign to nationalize the midterms and make them entirely about race. The GOP is trying to convince white voters to show up not in support of any specific policies but to demonstrate their allegiance to white supremacy. Democratic candidates of color have been repeatedly subject to racist ads painting them as un-American because they aren't white. Staggering numbers of Republicans have resorted to using the gang MS-13 as a stand-in for all Latino immigrants. Recently, of course, Trump has promised to end birthright citizenship by fiat, in a blatant violation of the Constitution and an overt effort to keep America white.

But while turning this election into a symbolic referendum on white nationalism is the main strategy of Republicans in the home stretch, it's far from the only culture-war issue they're trying to exploit. The larger strategy is about goading conservatives into viewing their votes as a way to stick it to liberals, rather than than an endorsement of any particular policy agenda.

On Wednesday night, for instance, Tucker Carlson devoted a huge portion of his Fox News show, once again, to arguing that "the left" has somehow denied conservatives "free speech."

"The left has made it clear that if free speech is an impediment to their agenda, free speech will have to go," Carlson ominously declared.

Unsurprisingly, the segment did not feature any actual examples of liberals using government power, which they mostly don't have, to suppress speech. Instead, guest Adam Carolla complained about people losing their jobs for "opinions," the content of which he was unclear about, probably because most recent examples involve people being fired for racist harassment of black people in public spaces, and sometimes in their own workplaces. Carlson whined about YouTube — a private company — refusing to let him use the  server space it pays for to host a video in which he floats a racist conspiracy theory about immigrants.

Then guest Dennis Prager rolled out his sad tale of "censorship," complaining that Sean McElwee at Huffington Post had accused him of advocating marital rape because Prager had written a column telling women that they owe sex to their husbands even when they don't want to have it.

This argument, of course, is incoherent. If these men believe in free speech, then certainly McElwee criticizing Prager for his views counts as free speech, even if it hurts Prager's feelings. But of course the right's "free speech" gambit has always been in bad faith.

Instead, in a segment this close to the election, it's clear what's really going on here: Carlson is trying to distract his viewers from thinking about issues like health care and the economy, and instead urging them to go out and vote for Republicans in order to stick it to those social justice warriors who make you feel bad about how you treat your wife.

Similarly, the folks at Fox News have been treating antifa — a deliberately unorganized grassroots movement of anti-fascist activists — in the same way that fascists have used the specter of communism and socialism since literally the rise of Adolf Hitler, that is, as a bogeyman to scare conservatives and make them feel that punitive retaliatory actions are justified.

"There is, you know, there is violence on the fringes of both sides, sure, but in the mainstream, the violence is only on the left," Michael Knowles of the Daily Wire said on Fox News -- after a would-be bomber inspired by Trump and a mass murderer inspired by Trump's caravan hysteria had been apprehended. "On the mainstream of political parties it's only being encouraged by Democrats -- roving gangs of antifa running Portland, Oregon, people harassing Republicans in restaurants, where they sleep."

"Even the mob violence and the lynch mobs coming for Brett Kavanaugh," he said, of the Supreme Court justice who was sworn in after a confirmation hearing marked by loud but nonviolent protests and a complete absence of "lynch mobs."

"Violence against those you politically disagree with is OK for one party in America and one party alone and it's the Democrats," Sebastian Gorka, former Trump adviser turned useless right-wing pundit said on Fox News as bombs sent to prominent Democrats, allegedly by Trump superfan Cesar Sayoc Jr., were being found one after another. "There is no equivalent of antifa on the right."

This rhetoric isn't just about deflecting the obvious, which is that right-wing violence is far more widespread and serious than a few black-masked leftists throwing water bottles. It's also about getting viewers to understand politics in general -- and this election in particular -- as a tribal conflict rather than a matter of people determining the course of their government's actions. (It's not like the government lets antifa vandalism or bottle-throwing go unpunished.) It's about conditioning viewers to see their vote not as a way to influence policy, but a way to score points for their side, and to get revenge on the liberals that they are told they should hate.

Will it work? Maybe or maybe not. There's no way to know until Tuesday night. But the reason Republicans are doing this is simple enough: It's all they've got. Voters hate the tax cuts for the rich. Voters don't want to lose their health care. Voters do not, simply put, like any part of the actual Republican policy agenda at all. So the party's only hope is to convince as many white voters as possible that their true interest lies in punishing liberals and people of color, rather than working toward a better future for themselves and everyone else.