We will (almost) rock you: Rami Malek is marvelous in "Bohemian Rhapsody"; it's not quite enough

Long-gestating biopic of legendary Queen frontman Freddie Mercury could have been a champion, but plays it safe 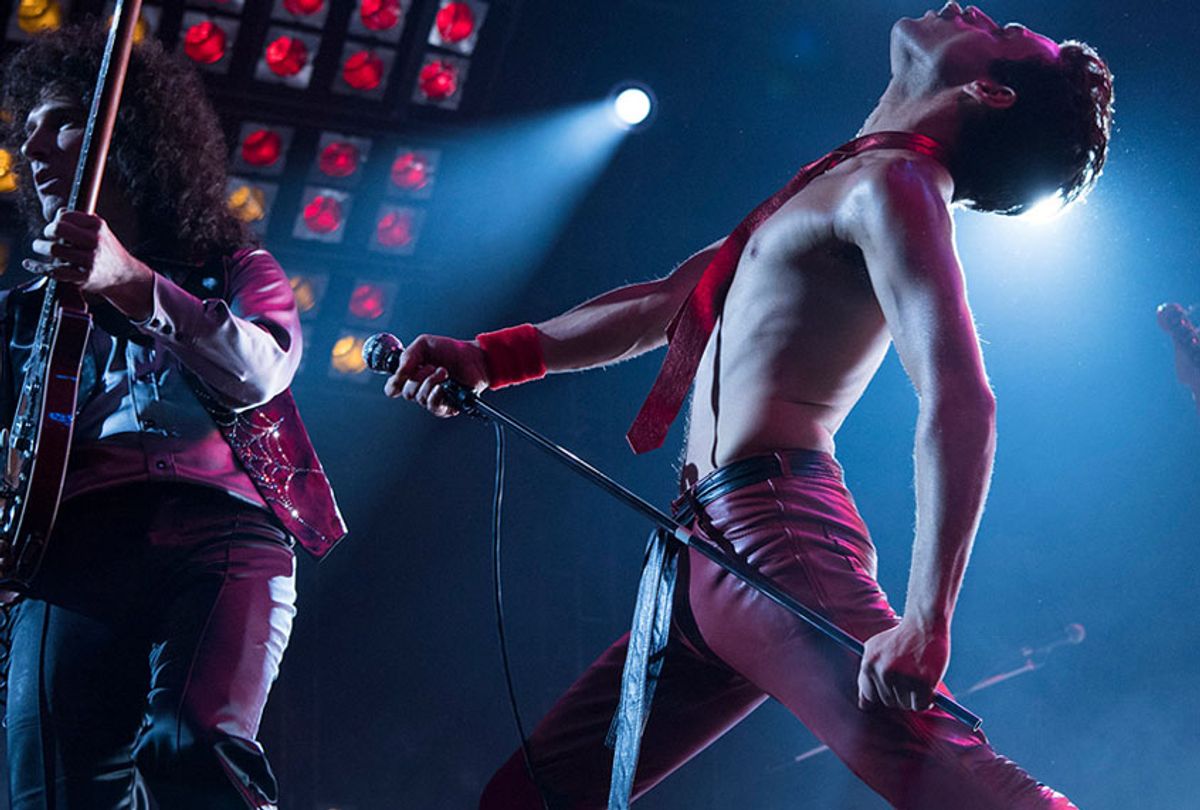 What viewers get instead, from Anthony McCarten’s script and direction first by notorious terror Bryan Singer and then by Dexter Fletcher, who took over when Singer was fired, is a PG-13 treatment of the standard three acts of a rock star legend: from humble beginnings to glorious stardom, then alienation and rock bottom in the form of Mercury's departure from the band, followed by the journey back to themselves for one shining moment — in this film’s case, the band’s triumphant performance at Wembley for 1985’s internationally-televised Live Aid concert. No less, but certainly no more.

The film opens on the day of Live Aid, then flashes back to 1970, when skinny little design student Farrokh Bulsara (Rami Malek) just wants to rock and roll, to the consternation of course of his uptight Parsi parents (Meneka Das and Ace Bhatti). He's impressed by a local band at a university gig, after which drummer Roger Taylor (Ben Hardy, who could have done more with a less reverent script) and guitarist Brian May (Gwilym Lee and his Brian May wig) lose their lead singer. Young Farrokh nails his parking lot audition, of course. They add bassist John Deacon (Joseph Mazzello, he of the bemused reaction shot), and the rest is rock and roll history.

Of course we know the tragedy of how Freddie Mercury’s story ends (he died of AIDS-related pneumonia in 1991), along with how the story of Queen refuses to end -- with the band's sixth active decade in its sights. The events of a band's rise, fall and rise again aren't supposed to be the endpoint of a biopic, though. Ideally they're just the foundation. The best such films use biography as a vehicle to tell the larger story of a time, a place, a people. Given what it could have been, "Bohemian Rhapsody" displays no such ambition. The band itself is even depicted as sui generis — only passing mentions of other musicians make it into this film, as if they came of no lineage and spawned no heirs.

Malek, to his immense credit, channels an unabridged discography’s worth of internal tension, with signature precision, into his performance, creating Freddie Mercury before our eyes from a gawky naïf stumbling his way into androgyny with the help of his soon-to-be love and later best friend Mary Austin (Lucy Boyton, who also does as much as she can with what she's given) to self-assured genius at the height of his powers, and then into a full-fledged art monster, destroying himself and his relationships during the film’s period of drug-fueled annihilation.

But all that tension has nowhere to go in this particular telling of the Queen story: Everything the band ever did went exactly according to plan, apparently, until slimy manager Paul Prenter (Allen Leech) machinated Mercury’s departure from the band and descent into a hellscape of booze and hard drugs, hinted-at casual sex, and personal and creative chaos. The recording scenes are great fun — in the age of the ubiquitous oral history, there remains something viscerally pleasing about showing, not telling, how a song comes together — and the concert recreations are thrilling. But when it comes to telling a story about people, not music, the script often lapses into cliché and easy resolutions. When Malek is acting alone — especially in moments that reflect Freddie’s delightful astonishment at his own creative powers — he’s riveting to watch. As soon as other characters enter the frame, the film is very careful to reveal as little as possible.

Once Freddie finds his way back to his chosen family — even the scene in which they have to decide if they’re going to take him back is sucked clean of any hint of drama — all is well in Queenland again, having gathered the prodigal back to the fold just in time for the band to take its place on the stage where it always belonged.

How does a movie focused on one of the most charismatic and groundbreaking rock stars of all time — the black sheep of a chosen family of black sheep — starring a brilliant actor and in possession of as soaring and searing of a soundtrack as “Bohemian Rhapsody” does, end up so devoid of magic? It’s hard to say from the outside. But the film’s preternatural smoothness raises interesting questions about what can happen when art and the idea of "legacy" collide.

In a 2011 interview with the Daily Record, when Sacha Baron Cohen was still in talks to play Mercury, May — who served along with Taylor as a creative consultant for the film, and sat for interviews with McCarten for his script — said, "Obviously, we go into it with a great amount of enthusiasm but also a certain amount of caution because Freddie's legacy is very precious and we have a great responsibility not to mess it up.” No doubt it's also significant that Jim Beach, Queen’s lawyer turned longtime manager — portrayed in the film, by Tom Hollander, as the only loyal and steady one amid the troika of suits surrounding the band (“Game of Thrones” schemer Aidan Gillen, as the ground-under-the-bus-wheels John Reid, didn’t even get to play the most treacherous of the snakes) — served as a producer.

Cohen told Howard Stern that members of the band didn’t want the more extreme parts of Mercury’s life included, which suggests the pursuit of a PG-13 rating might have been more of a means to an end. The film doesn’t shy from depicting Freddie as dangerously intoxicated — a disastrous press conference in particular employs egregious after-school-special-level “whoa the camera is drunk” effects — but pulls away after the lightest hints that he was having sex with men, as if to confine Freddie’s sensuality to the stage where it comes off as mere pose, all look but don’t touch. This is a film that moves at a brisk pace past the carnal delights of a gay dance club — nothing to see here, kids! — a neon arrow only hinting at what’s around the corner, for example, but will linger more than once on a reaction shot of one of Freddie’s cats' faces.

Ideally, a film like this would attempt to add to, or to contextualize, a legacy. Instead, “Bohemian Rhapsody” tries to sanctify it, pack it in bubble wrap to protect it from causing, or being caught in, any friction. As a result, the film too often treats Freddie Mercury as a precious figure, when he was very much a man.

"Bohemian Rhapsody" is not a terrible movie, but it's also not a necessary one. Of course, it's nearly impossible to be human and not feel some stirring of legitimate emotion when Freddie Mercury sings "We Are the Champions," and the film makes ample use of those powerful moments. But as long as footage of the real-life Freddie singing his heart out for his fellow freaks exists, if the imitation won't dare to be dangerous in order to break through to new truths — a fitting tribute to Freddie's legacy, if ever there was one — it's probably enough to stick with what's left of the real thing.