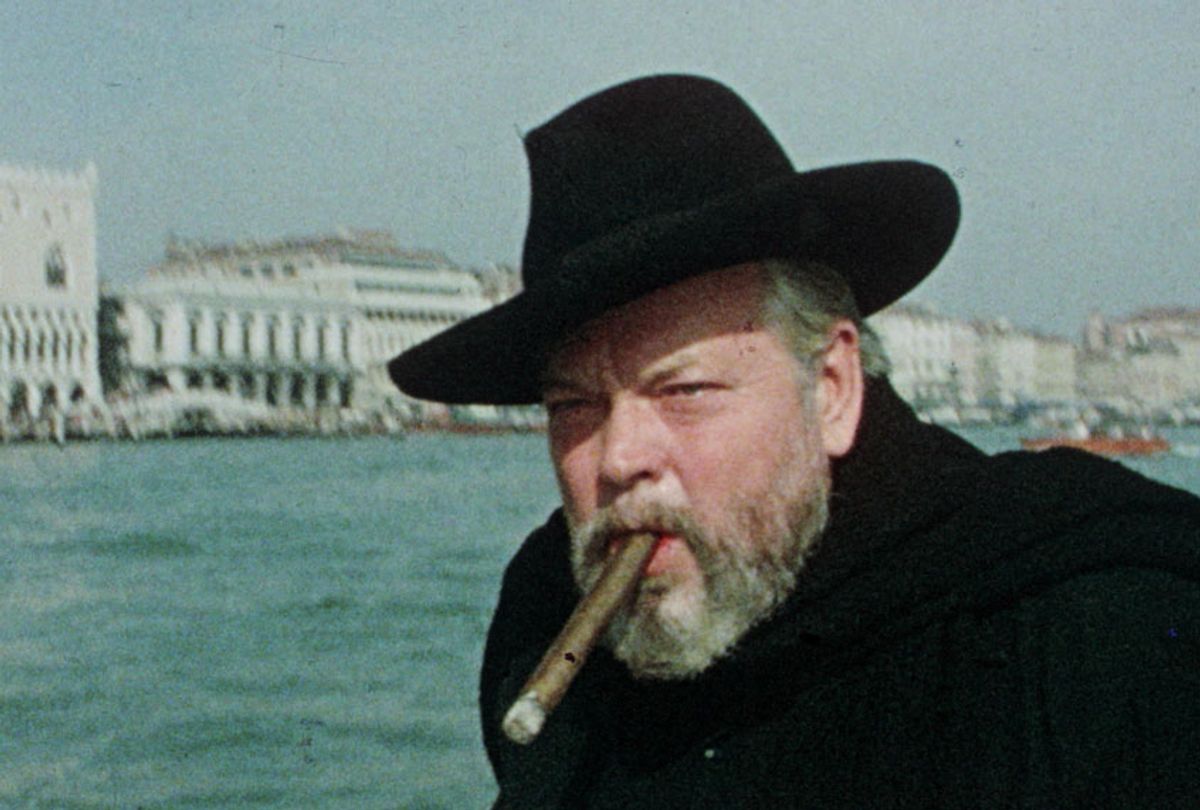 Morgan Neville is having quite a year. His documentary, “Won’t You Be My Neighbor” was the feel-good film of the summer. And this week, Netflix will release his documentary, “They’ll Love Me When I’m Dead,” about Orson Welles’ unfinished film, “The Other Side of the Wind.”

The story of “Wind” is two-fold; it’s a documentary film about a filmmaker (John Huston) looking to make a comeback and a film-within-a-film that mirrors Welles’ life. But Welles insists it’s not about him. He even explains that the film-within-a-film is directed by the fictional character, played by Huston.

Neville’s doc will entice almost everyone who sees “They’ll Love Me When I’m Dead,” to want to see “The Other Side of the Wind.” Telluride Film Festival attendees got their chance as the film had its American premiere at the festival (to mixed response).

Neville chatted with Salon at Telluride about his doc, Orson Welles, and even Fred Rogers.

How did you learn about “The Other Side of the Wind?”

It was really Josh Karp, who wrote a book, “Orson Welles’ Last Movie: The Making of The Other Side of the Wind,” and there was an excerpt that ran in Vanity Fair. I read the excerpt and flipped out. I read the book as soon as it came out. I just remember thinking, if I could get the rights to the footage, there’s an amazing documentary here. So I started looking into it. At that point, Frank Marshall and Filip Jan Rymsza had just started their Indiegogo campaign to raise money to get the feature finished. They said it’s going great, and we should have the footage in weeks . . . as that happened with everything on this film, there were major mountains to climb that came out of nowhere, so it ended up taking me four years. So, compared the amount of time everyone else spent on the merry-go-round, I only had to do the last circle.

Your documentaries are all about a certain kind of celebrity — often ones that are misunderstood or underseen. You shine a light on a celebrity in a way that folks might not expect. What observations do you have about that theme? What is the attraction?

I actually don’t feel my films are about celebrity. I feel like they are about culture and looking at things in our culture that are familiar but that we don’t fully understand — and being able to look at something that’s all around us and see it in a new way. Hear a song a thousand times and suddenly understand that song means something totally different, or a children’s TV host you grew up with and never realized was actually teaching you how to be a human being. I’m not interested in celebrity, but I am interested in finding the hidden depths in culture that we don’t notice. “20 Feet” is a little different, but part of it is that documentaries are about character and story, like any feature film. I’m always looking for great characters and great stories.

When I started the Mr. Rogers film, a lot of people gave me a sideways glance. “Isn’t he the quintessential two-dimensional character? Is there any there there?” I knew he moved me in some way. With Orson, I will say, I’ve never found a more interesting character. He is endlessly fascinating and the complexities of his story and personality is kaleidoscopic, which is what’s so great about him. When we were cutting the film, every moment of his story feels Shakespearean in a certain way. These big themes of betrayal and tragedy and divine comedy. Everything felt so heightened with Orson that it was just amazingly fun to make.

Did you get see finished version of “The Other Side of the Wind” before you made “They’ll Love Me When I’m Dead”?

We finished our film before I watched their film because I wanted it to be Church and State. The thing is Orson shot this movie for six years. He shot ten movies' worth of material. We put together our first cut and they put together their first cut. I had my producer and editor watch it, and he said they are amazingly different. I love the idea that they are going in very different directions. If you’re talking about a meta story, it doesn’t get any better than a film about a filmmaker about a film about a filmmaker who is making a film within a film. It’s the ultimate Matryoshka doll. It’s so much fun!

One of my all-time favorite documentaries, a film that made me want to make documentaries, was Welles’ “F for Fake,” Orson’s only proper documentary, which he made in the middle of making “The Other Side of the Wind.” It’s so smart and mischievous. Welles had a tremendous sense of humor and mischievousness that didn’t normally come through in his feature films, but those who knew him knew comedy was as important to him as tragedy. Particularly as he got older, he was more and more interested in the absurd and farce, and not having to be prove how serious he was. Part of it is trying to honor some of that. We were trying to approximate the tone of “F for Fake.”

The other thing about the narrator is that Orson loved narration. If you look back on every TV show he did, or his feature films, he’s narrating. He loved the narratorial voice. It goes back to his radio background. It’s not just a “voice of God” narrator, but a storyteller who is a character unto himself. Even though it’s so out of fashion to have an on-camera narrator in documentary, we had to do it on this one. It’s so Wellesian to do it!

There’s an interesting observation Welles makes about hiding the real Orson behind a mask, behind a nose. You take that mythology. What are your thoughts about how Welles really was?

He is the ultimate Protean character. It’s like anything you can say about Orson Welles is actually true. Was he a heroic figure, a tragic figure, a victim, a culprit? That’s part of Orson. He was a different person depending on the temperature, the time of day, the clouds in the sky. He was someone who presented different faces. Was Orson a victim of his bad luck, or the creator of his own bad luck? I’m not there to answer it. After talking to dozens of people who knew Orson, they vehemently disagree with each other. I’m more of the conclusion that it’s all true.

What about other people’s impressions of Welles? Some say that they only wanted to please him. He is also accused of alienating people. Can you talk about the myth of Orson Welles, a perfectionist who often bit the hand that fed him?

Some film critic said that Orson was always an independent film director, it’s just at the beginning of his life, he had the machinery of the studio behind him; but at his essence, he was never a studio filmmaker. I think that’s true. He had an incredible ability to command a group of people to follow his vision. But he had an incredible blind spot when it came to dealing with people with money or power — almost a pathological resentment towards those people that did not serve him well as a producer. At the end of the day, many people who worked with him all took the leap of faith, and everyone I interviewed said he knew exactly what he wanted and what he was making, but Hollywood studios were not going to do the same thing. Orson should have been a painter in the Renaissance and had a Medici to support him. He needed a patron to pay for his art. Orson saw film as the pinnacle of all art forms. He said it was an incredibly expensive paint box. But he never understood that because of that, it’s largely full of compromise.

My decision was to make a film about the last 15 years of Welles’ life. It’s bookended by him arriving in Hollywood in 1970 by BBS [Bob Rafelson, Bert Schneider, and Steve Blauner], the company that produced “Easy Rider.” Arriving in the middle of the dawn of the New Hollywood, Orson should have been the conquering king, who should have made six films. And he never finished another feature film. And he never left Hollywood. He died in Hollywood, just off of Hollywood Boulevard! What happened in those 15 years was my question. That’s a story I’d never really heard before. It says a lot about the industry. And it says a lot about Orson. Why did he stay there if he felt so alienated from the industry? The reality was, and this was kind of the consensus people told me — he was so in love with film that it was better to be next to the center of the art rather than ex-patriated somewhere.

Welles describes “Wind” as a film he hopes will be comprised of “divine accidents.” What divine accidents did you have making this documentary? Was there a “gotcha” moment?

This film was an archival documentary, so much of what you’re doing is digging for things and finding something that changes the narrative. There were so many of those — the whole Rich Little thing! I remember watching Rich Little on TV in the 1970s as a kid. He mentioned “Copycats.” I found this episode that no one had seen. I dug it out of a vault in England. They had it on two-inch tape. All these moments all really happened! What is Orson Welles doing on a British comedic variety show while he’s making this incredible movie? Then things like Peter Bogdanovich telling a story of Orson telling him to meet him on a runway at LAX and then coming across that footage! We started making the film before we had our hands on that material.

How much footage did you comb through to make “They’ll Love Me When I’m Dead”?

We went through every bit of film that was shot for “The Other Side of the Wind,” and that was probably 75 hours of film he shot. There might even be more than that. We did 40 interviews and a ton of other archival work. We ended up going through a few hundred hours of material total. But it was important not to do the obvious stuff. Everyone talks about the late Orson from the drunk Paul Masson commercials. We put that in there, but in a different context. It’s not “see how sad and pathetic he was,” it’s understanding that Orson drew this line in his life that the public didn’t understand, which is: As an actor, I will prostitute myself, because acting is not a real art form, but as a director, I will remain virginal. He said something to that effect. He would never compromise at all with his filmmaking, but the public didn’t see that distinction. They didn’t understand the nuance. They just saw him on TV shows and didn’t realize he was doing “Lear” or “Merchant of Venice” as he was doing that.

Do you think, as the film suggests, that he never wanted to finish a film, or this film? That it was a suicide note? That “Kane” was a curse? That failure was an interesting ending for a career that started so promisingly. You have some real ambiguity here. What do you want viewers to think, and what do you think?

I think Orson was always shadowboxing with his own legacy, and that was something he found incredibly unfair. I do think that he wanted to finish movies, but I also believe that he was far more interested in making films than finishing films. How’s that for ambiguity?