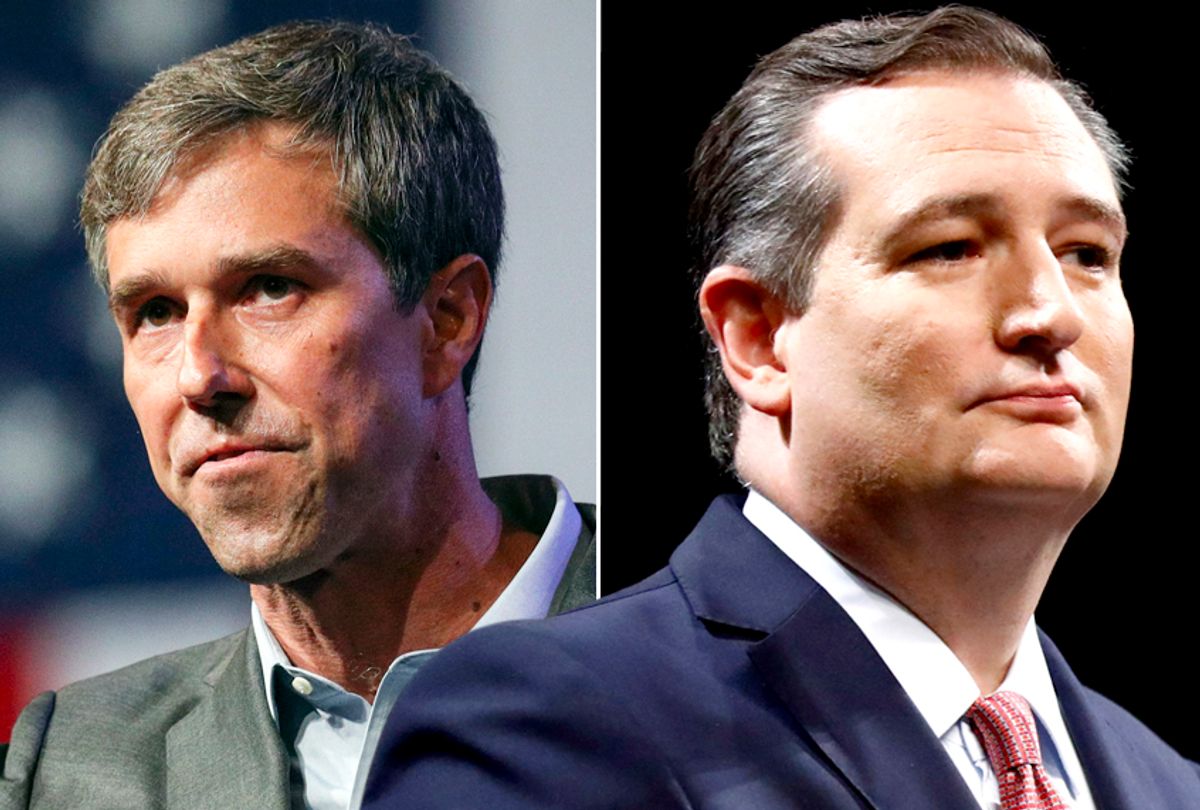 With just days until the midterm elections, Sen. Ted Cruz, R-Texas, is taking a cue from President Donald Trump's midterm playbook by pushing a fear of immigrants to the forefront of his election strategy discourse. The Texas lawmaker suggested his Democratic rival has used his campaign dollars to illegally fund the so-called migrant caravan that is heading towards the U.S.-Mexico border, and directed people to "just kick the door" of O'Rourke's supporters in response.

"Two basic Qs every reporter should ask Beto today: (1) should the 'caravan' be allowed to cross illegally into Texas? (Beto refuses to answer.) And (2) did your campaign dollars illegally fund their doing so?" Cruz asked, linking to a right-wing website founded by Erick Erickson that makes no mention of O'Rourke's campaign funds.

During a campaign rally on Tuesday in West Texas, Cruz slammed O'Rourke over his seeming lack of concern about the several thousand migrants who are heading toward the U.S.-Mexico border, which he framed as a threat to national security, even though they are still roughly 800 miles from the border. The Texas lawmaker told his supporters that the migrants seeking to cross the border are not welcome, but if they manage to enter the U.S. then they should head straight to the homes of O'Rourke supporters for help.

"When you get here, we have identified homes, that are willing to take you in to give you free housing, free food, free health care," Cruz said during a stop in San Angelo, KTSM reported. "And every one of these homes is self-identified with a little black and white sign that says Beto. Don't bother knocking, just kick the door and they don't believe in walls, so just let yourself in, and make yourself at home." Cruz made the same comments in Waco on Wednesday, Fox affiliate KWKT reported.

A pro-Cruz super PAC recently launched an attack ad against O'Rourke, claiming that the Democratic congressman is "cheering on" the so-called caravan of Central American migrants making their way toward the U.S. border.

The 30-second ad, which was first spotted on air Tuesday by the Dallas Morning News, features grainy images of the caravan and includes a doctored photo of O'Rourke giving a thumbs-up while holding a sign that says "Beto for Amnesty." It labels the Democratic candidate as "Open Borders O'Rourke," and describes him as "relentlessly radical."

"The caravan is coming to Texas. Some say criminals among them," a narrator says. (The migrants had not said what route they intended to take.) "But there's Beto O'Rourke, cheering them on: 'Welcome in; stay awhile. Don't be paranoid,' Beto tells us … driving the caravan for amnesty from his minivan."

The ad was paid for by Texans Are, a pro-Cruz super PAC based in Virginia, and was launched by former Cruz aides. It has already spent more than $4 million to defeat O’Rourke, mostly on television negative television ads attacking O'Rourke on immigration, Yahoo News reports.

O'Rourke denied that he does not care about migrants crossing the border during a campaign event in East Austin, Texas.

"You know, perhaps no one cares more about a secure border than those of us who live on the border," O'Rourke told the Dallas News. "Amy and I are raising our three kids" there, he said. "That's why I've made border security a priority [and] been able to work with John Cornyn, a Republican senior senator from the state ..., on common-sense, border solutions."

As Cruz and O'Rourke battle in what is perhaps the most closely watched Senate race of 2018, recent polls have shown O'Rourke is closing in on Cruz's single-digit lead, revealing a tightening race in Texas as Election Day looms closer.

It remains to be seen if O'Rourke has a chance of unseating Cruz on Election Day and turning solidly-red Texas purple. The current Real Clear Politics polling average shows Cruz with an overall lead of 6.5 percentage points.