To hell with unity: Win or lose, Donald Trump doubles down on fear and hostility

Even faking a presidential "unity" moment would have been sensible politics. But Trump remains true to his creed 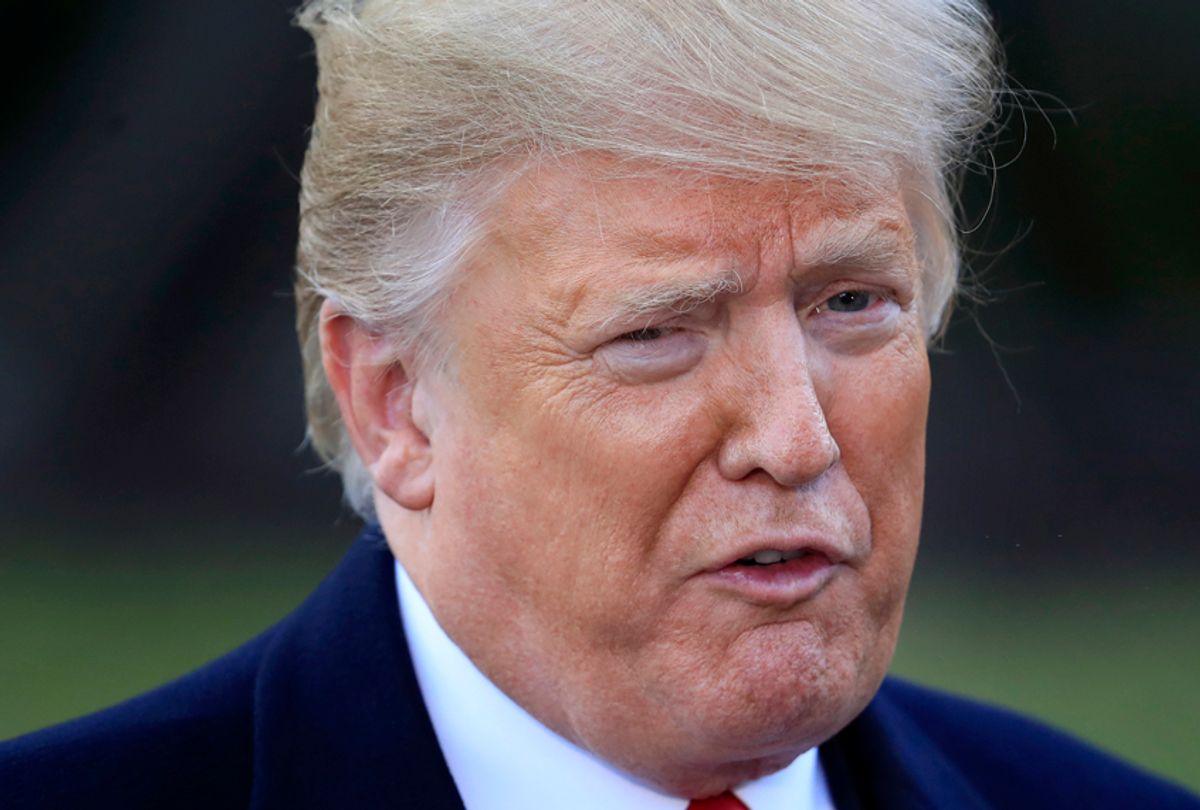 All presidents lie at one time or another. Some have told monumental lies ("Saddam Hussein has weapons of mass destruction") and others have told self-serving lies ("I did not have sex with that woman"). But no previous president has told an average of eight lies per day on every subject, important or not, as Donald Trump has done. After observing him for the past two years we can be confident in saying that he is the most dishonest president in history.

Even he doesn't really deny it. Jonathan Karl of ABC News interviewed him this week and said "I remember, you remember well in the campaign, you made a promise. You said, 'I will never lie to you,' So can you tell me now, honestly, have you kept that promise at all times? Have you always been truthful?" In a revealing reply, the president said:

Well, I try. I mean, I do try. I think you try, too. You say things about me that are not necessarily correct. I do try, and I always want to tell the truth. When I can, I tell the truth. I mean, sometimes it turns out to be where something happens that's different or there's a change. But I always like to be truthful.

He tries. He likes to be truthful. When he can, he tells the truth. Apparently, most of the time he cannot. And we know why. He doesn't know what he's talking about so he makes things up.

But just as Trump reveals himself in that comment, the last couple of weeks have revealed something else. If anyone wondered whether there were any limits to what he would say and do to win, Trump has shown us that there are not. As Salon's Amanda Marcotte points out, the sharp escalation in xenophobic, anti-immigrant rhetoric, boosted through a feedback loop by Fox News, makes that clear. And nothing will stand in his way, not even a week of violent threats and an attack that left 11 people dead at the hands of a gunman who parroted his lies and racist demagoguery.

That's not to say the president wasn't personally upset by those awful events. He was. Vanity Fair reports that until the mail bombs and the Pittsburgh synagogue attack, Trump had been in a buoyant mood, assured by his pollsters that the midterm campaign was going well. His rallies were raucous events featuring his greatest hits. He had gone sharply negative, particularly against the media, and was feeling the energy and excitement that incites among his followers. Then these violent extremists came along and inflicted carnage and terror and ruined all his plans. He has even said as much, in tweet form.

Again according to Vanity Fair, there was some talk of having Trump do a prime-time address on the topic of “unity,” but he quickly shot that down and went with his top advisers -- former Fox News executive Bill Shine, former campaign manager Corey Lewandowski and long-time GOP henchman David Bossie -- who told him what he wanted to hear: Give the bloodthirsty base some red meat, and go after immigrants twice as hard. It's not clear whether anyone considered that this tactic might be reprehensible in light of the fact that the synagogue shooter was motivated to kill Jews at worship not just out of his long-standing anti-Semitism but because Trump and his fellow travelers at Fox News were pushing the idea that the caravan of refugees walking through Mexico had been financed by the "globalist" (i.e., Jewish) George Soros.

Not that it would have made a difference in Trump's conduct. He was chuckling at the White House when members of a worshipful crowd yelled out Soros' name and chanted "lock him up," just a day after the horrific massacre in Pittsburgh took place. As recently as Thursday, when asked if he still thinks the caravan is being financed by George Soros, Trump said, "I don't know who but I wouldn't be surprised, a lot of people say yes."

He also admitted once again on Thursday night that he was upset about the violence interrupting GOP "momentum":

He knows what he's doing. Since he is so thoroughly entwined with Fox News that it's impossible to know where he begins and it ends, and since his rally-goers are enraptured by his every utterance, he believes that there are more than enough people like him in America and that if he can light a fire under them he can win this election. So every day, he's throwing more gasoline on the fire. He's sending troops to the border: First it was 800, then it was 5,000 and now he's talking about 15,000.

On Thursday he gave his followers another giant thrill by saying that he told those soldiers to shoot any migrants who throw rocks. "Consider them a rifle," he said. He has revived the "birthright citizenship" issue, apparently believing he has the power to interpret the Constitution however he chooses and can end a bedrock American principle enshrined in the 14th Amendment by presidential fiat. He has also announced that he will build refugee camps on the border and will reinterpret the law that allows asylum seekers to turn themselves over to the authorities for processing anywhere in United States territory, which has always meant they can do so even after illegally crossing the border. And then there was that despicable racist ad.

He hasn't yet taken up the Fox News line that the migrants are carrying diseases, although it may only be a matter of time. At the moment he is content with portraying this ragtag group of desperate people, many of them mothers with children, as criminals and terrorists who are invading the country.

Axios interviewed the president for a TV show to be aired this weekend on HBO and posted this excerpt:

Axios: Tens of thousands of people go into a stadium to listen to you, and then people go on social media and they get themselves so jazzed up. There’s got to be a part of you that's like: "Dammit, I'm scared that someone is gonna take it too far."

Trump: It’s my only form of fighting back. I wouldn’t be here if I didn't do that.

This reveals his attitude about his entire presidency. Just because he understands that he's using inflammatory rhetoric to gin up his base doesn't mean he doesn't believe it himself. He's not a cynic, and he isn't just being a "pragmatic strategist." If he were, he would have taken the opportunity to give that "unity" speech and try to bring a few of the independent and female defectors back into the fold. All presidents benefit from moments when they can bring people together, and with this one coming so close to an election, it could have made a difference for the Republicans.

He chose not to emphasize unity because he doesn't believe in it and doesn't want to. I hope everyone is prepared for the fact that even if Democrats pull off a big win next Tuesday -- which is far from guaranteed -- Donald Trump will be ratcheting up the hostility and anger every day for the next two years. This "fight" is all he knows how to do.