America at the crossroads: On the eve of an election that means nothing, but means everything 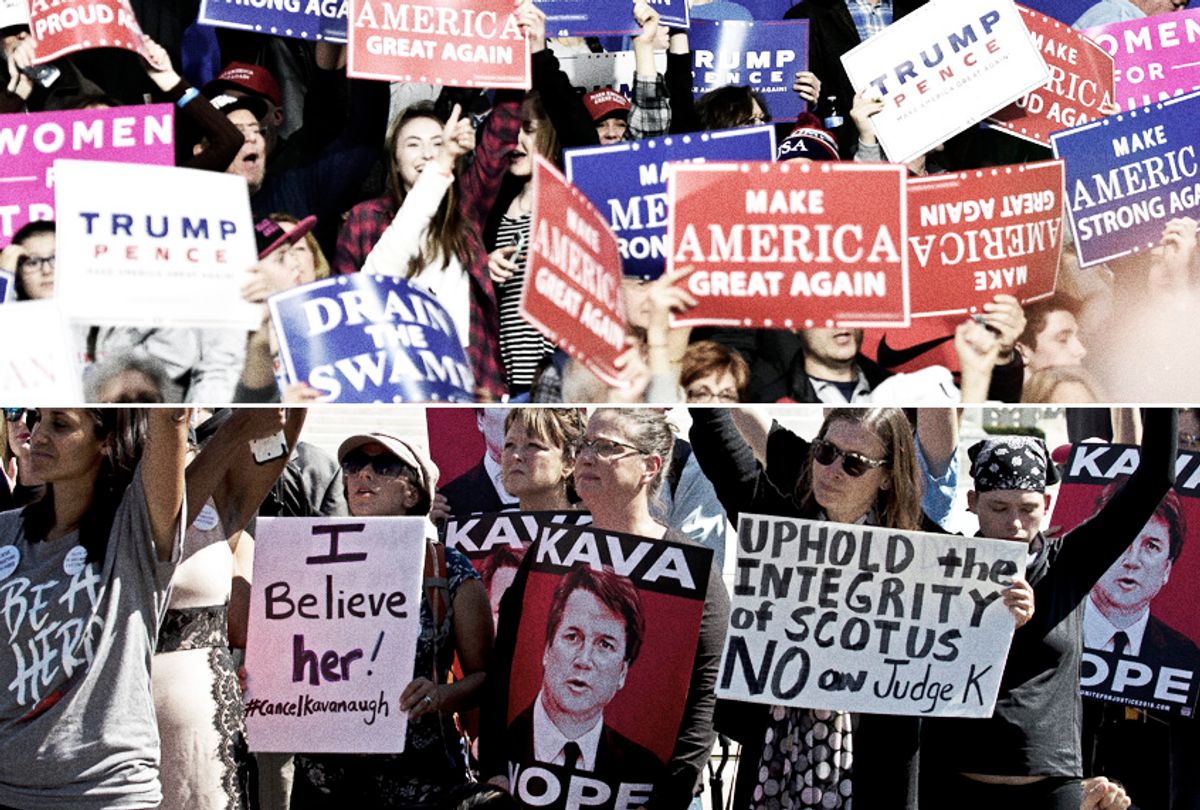 America, we need to talk. Somehow or other this nation has arrived at a historic crossroads, in a moment that seems quantifiably ordinary and with an election that honestly shouldn’t matter much. As historians and political scientists will tell you, midterm elections follow a cyclical and highly predictable pattern: After the first two years of a new president’s term, his party is highly likely to lose seats in Congress, as the opposition regroups and enthusiasm for the party in power begins to fade.

For all the epoch-shaping significance being attached to the 2018 midterms, that is almost certain to be the outcome this time too. Democrats will surely win some congressional seats, probably more than enough for a modest majority in the House of Representatives, although in the most Republican-friendly scenarios they could fall just short. As for the Senate, that will almost certainly end up within a seat or two of the current 51-49 Republican majority, in one direction or the other. The larger fight about de-Trumping America, finding an antidote for the current epidemic of right-wing nationalism and restoring some sense of common ground and shared purpose — all of that still lies ahead.

So, honestly, what’s the big deal?

I ask that both facetiously and not, in a sense of genuine wonder. If you live in this country — if you live in the world, for that matter — you have seen and felt over the past two weeks why this election matters. It is difficult to put that into words with precision, however. Hardly anyone would deny that something has gone seriously wrong in the United States, although we clearly don’t all agree on what that is.

That is a peculiar diagnosis, in some ways. Our national economy remains strong, according to most of the supposedly important indicators. We have been mired in the same pointless and nebulous overseas conflict for the last 17 years, but beyond that interminable waste of human lives, money and global goodwill, there is no serious threat of war with a foreign power. Looking past the spectacular episodes of violence that have become characteristic of our society, rates of violent crime are at or near historic lows. However you choose to define our national disorder, it cannot be captured in statistics like those.

Whatever is wrong is cultural or psychological or perhaps spiritual; maybe all three. It is not new, and it stretches from the top of our society down to the bottom. It expresses itself not in the most blatant and obvious signs of social disorder, but in apparently unrelated phenomena: Extraordinary levels of economic inequality; disturbingly high rates of suicide and drug overdoses; the poisonous universe of the internet, which was supposed to bring people together and maximize the spread of information but has instead done precisely the opposite, driving us into separate caves where we dance around tribal bonfires and worship false idols.

It has become commonplace to say that Donald Trump and his allies are undermining democracy, and it's hardly necessary to list a litany of examples: the hateful and divisive rhetoric, the mysterious relationship with the Russian government, the overt longing for a police state, the nudge-wink flirtation with white supremacy and other versions of far-right nationalism. All of that has happened, but to focus on those details as if they came from nowhere is the ultimate example of putting the cart before the horse. Democracy had been well and truly undermined before Trump and friends came along and perceived an opportunity.

Trump is only a symptom of what ails America, not the cause. If Trump was the vector that unleashed Cesar Sayoc Jr., who tried to blow up numerous prominent liberals with mail bombs, or Robert Bowers, who murdered 11 Jewish worshipers at their synagogue in Pittsburgh, that’s not the same as saying he bears personal responsibility for their actions. We all do, which is one reason why the last week or two have been so profoundly upsetting for so many of us. We all allowed this to happen.

It’s crucially important for the Democratic Party to win this election. I say that with certain philosophical and political misgivings, and without being entirely sure that, in the larger sweep of history, it even matters. But a big victory on Tuesday would have enormous symbolic importance, not so much for the party and its candidates but for the rest of us. It would bring hope to many people who have felt hopeless for the last two years; it would suggest to many disheartened Americans that despite all the signals to the contrary, our destiny remains in our own hands.

It’s important for the Democrats to win, but not because they are thriving and strong and know what they’re doing. That would be a laughable claim. If anything, the Democratic Party seems strikingly unprepared for this moment. It’s a timorous and internally conflicted coalition with no clear ideology and no core constituency, which deliberately avoids controversial or confrontational positions and has spent almost 30 years defining itself entirely in negative terms: not Republicans, not tax-and-spend liberals, not the left.

In fact, it might be more accurate to describe the Democratic Party, in its weakened and deracinated condition, as a different aspect of the same cultural and political decay that produced Trump, rather than as an actual antidote to Trump.

Certainly there are signs of ferment and change within the Democratic coalition: If that ferment first coalesced around Bernie Sanders in 2016, it has now spread far beyond him. (One of many reasons why Bernie should stay off the field in 2020.) A year ago, almost no one had heard of Alexandria Ocasio-Cortez and Ayanna Pressley, who will both be elected to Congress this week; or Andrew Gillum and Stacey Abrams, who may make history as the first black governors of their respective Southern states. As they and numerous other examples suggest, the Democrats could have a brighter, bolder future.

I am under no illusions that a Democratic House majority, or even a Democratic Senate, will bring an end to the Trump presidency. That’s clearly not happening, and anyway that’s up to us. I also do not believe Democrats in power can or will do much to undo the Trumpian damage of the last two years and set the country on a course toward sanity and normalcy. That assumes way too much about the nature of the damage and the definition of “normalcy,” and once again, that stuff is up to us.

I’m not super-eager to sign onto some Coalition of Responsible Grownups, in which middle-road liberals and conservatives with university educations sit around a table, tut-tutting about the awful man who has accidentally become president, and conclude that it’s time to put ideology aside in the name of patriotism. One thing Trump and Steve Bannon correctly understood is that that kind of pundit-class posturing – the eye-gougingly awful New York Times “debates” between Frank Bruni and Ross Douthat, for instance -- now appears mendacious and corrupt. When people like that start to agree about something, make sure you have your wallet and your keys: The subject is generally war or money, and their agreement signals that something bad is happening and regular people don’t get a vote.

But what I have to say admittedly isn't be that different. It’s important for the Democrats to win because, as a friend of mine once put it, they are the only car in the driveway that will actually start. Like it or not (and I pretty much don't), they are the only vaguely normal political party this country has at the moment. To be direct, they are the only party standing in the way of a slow-metastasizing and especially mendacious form of fascism.

I have steered away from that word in pondering the Trump phenomenon; it usually feels lazy. But after the shocking events of the last two weeks, and after the ever-darker tone of last-minute Republican propaganda, no other word will do.

Donald Trump is not Hitler (although there are some intriguing similarities) and the parallels between the current political situation in America and 1930s Germany are highly approximate. For one thing, the Nazis were entirely honest about their desire to dismantle democracy, build a police state and purge the nation of Jews and other undesirables. They told voters what they were going to do, and then they did it.

Today’s Republican Party, remade almost overnight in the image of its new leader, is like a horror-movie mashup character, part psychotic and part zombie. It can remember bits and pieces of its old life and its discarded, semi-coherent belief system; it feels compelled to pretend that those alleged principles somehow fit with its new creed of racial authoritarianism. It must pay lip service to democracy and the rule of law, while making clear to its followers that those things are not meant to apply to everyone across the board. It must claim to be the “least racist” party ever, and act outraged if accused of bigotry, while eagerly working to undo every progressive social reform of the last century.

It’s imperative for Democrats to win this election because the decades-long process of moral and intellectual rot in the Republican Party has finally ended in a virulent and dangerous form of madness. Republicans have almost entirely ditched traditional “conservative” politics in favor of a radical agenda to “define democracy downward” and remain in power indefinitely at the helm of a pseudo-democratic state built on racial and economic apartheid. A fascist state, in other words, whatever term it might apply to itself. Donald Trump catalyzed and accelerated this process, and became its major beneficiary. But he didn’t start it, and there’s no reason to believe it will stop when he departs the political scene.

Do Democrats understand the grave and unique danger we face at this historical crossroads, where at least a third of Americans would be delighted to follow Trump and the Republicans into the darkness, and an unknown number of others would be willing to follow along? I don’t know. How well do any of us understand it?

Do Democrats understand that only a forceful, positive agenda can short-circuit the surge of right-wing nationalism and begin to build a different model of America, and that defensive half-measures will never be enough? You know the answer to that one. Making that possible is up to us. That work can begin on Wednesday.