The simple, perfect potato wonder that brings me back to Spain every time

A love letter to the Spanish tortilla 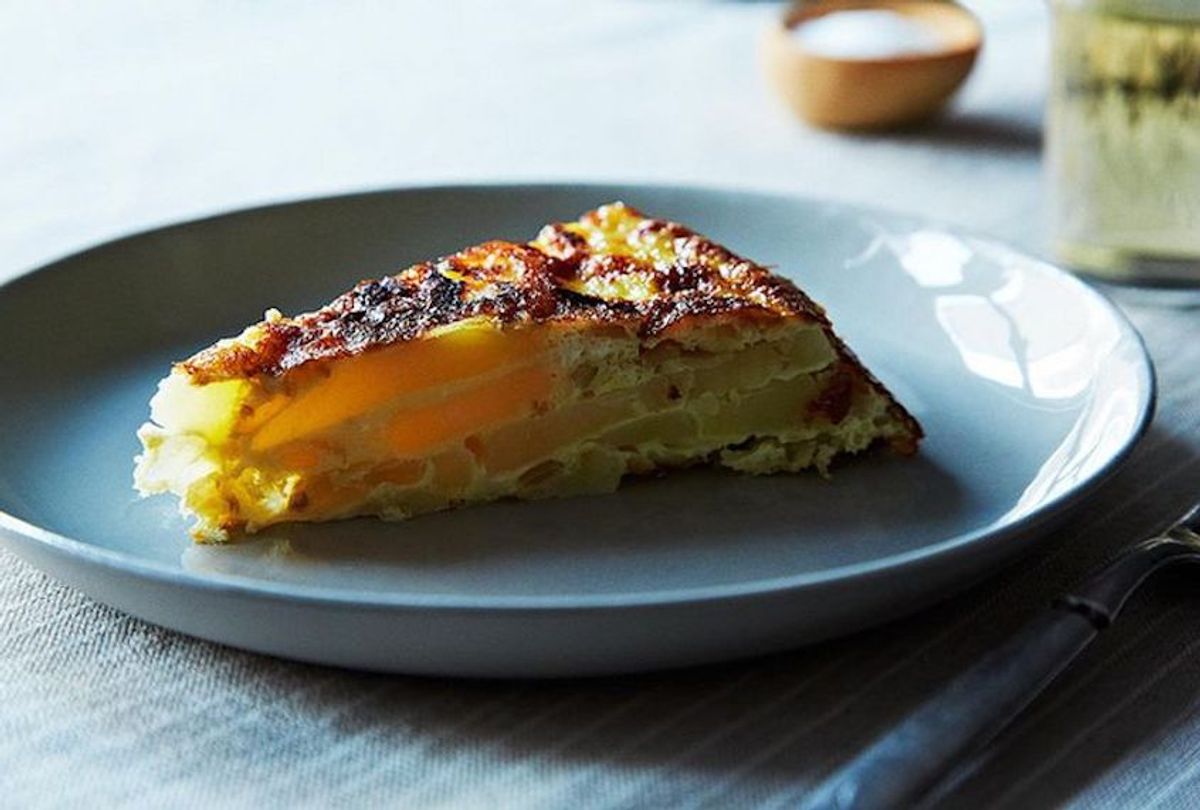 There’s an old idiom: You can’t make an omelet without breaking a few eggs. Likewise: you can’t make a tortilla de patatas (Spanish potato omelet) without splashing some burning hot oil on yourself. Or can you?

Years before I ever attempted to make one on my own, I tried my first tortilla de patatas in Salamanca, Spain. It was much like my first kiss: despite inviting something completely foreign into my mouth, pretty quick and unremarkable on the whole. Though my seventh grade boyfriend and I are no longer together, tortilla de patatas and I are still going strong.

Per her agreement with my study abroad program, my Salamancan host mom, or “Señora,” was tasked with feeding me authentic Spanish meals each day. During lunch, the most important meal in Spain, she served elaborate meals—like pisto manchego topped with crispy fried eggs and rich stews dotted with chorizo and white beans.

But on one particular afternoon, she didn’t have time to go to the market. So with just four ingredients — eggs, potatoes, onions, and a hedonistic amount of olive oil — she threw together a tortilla de patatas. We ate it with crusty hunks of bread, a simple salad with olive oil, salt and vinegar, then retired to our bedrooms for a nap.

As my dad was the self-proclaimed breakfast chef extraordinaire of our family, I’ve always been big on breakfast. Whether it’s a short stack of French toast, topped with a pat of butter and doused in maple syrup, a fluffy omelet oozing with bright orange American cheese or simply a bowl of Corn Flakes with milk, I love breakfast foods — any time of day.

Despite its seeming suitability for the breakfast table, tortilla de patatas became one of my lunch staples in Spain. It became my default order. Like the gin and tonic to my dive bar, I pulled the tortilla de patatas card in many a random bar at lunchtime.

The more time I spent in Spain — I returned to live in Madrid, Bilbao, and Mallorca — the more tortilla I ate and the more I learned about its potential for innovation. In Basque Country, for example, it’s not uncommon for pintxo bars to serve what I call a tortilla sandwich: a layer of [name your ingredient: tuna salad, crab meat, sautéed spinach, cheese, etc.) sandwiched between two whole tortillas de patatas.

Eventually, I left Spain and moved back to New York. It was here that I started missing my favorite starch-laden snack, and decided it was time I start cooking tortillas for myself.

In the beginning, I had some trepidation about the infamous flip — the upside down pan-on-plate part that comes right after the eggs are set on one side. Then you shimmy the half-cooked tortilla back into the pan, leaving a slug trail of raw egg, and finish cooking the second side of the tortilla. So I began with smaller, personal-pan tortillas, and eventually graduated to family-sized portions.

With practice and bravery, you, too, can learn to perform the Spanish tortilla flip. But in Amanda Hesser’s recipe, she uses a beginner-friendly method that will save you the time, the stress, and any hot oil splashes.

And besides being relatively cheap and simple (just four ingredients plus a generous amount of salt), people are inordinately impressed when you prepare a tortilla for them. That’s when you pour another glass of Rioja, and say, “Oh, this? Just a little recipe I picked up in Spain.”