Graham's comments follow a report that "embattled officials . . . are expected to be fired or actively pushed out" 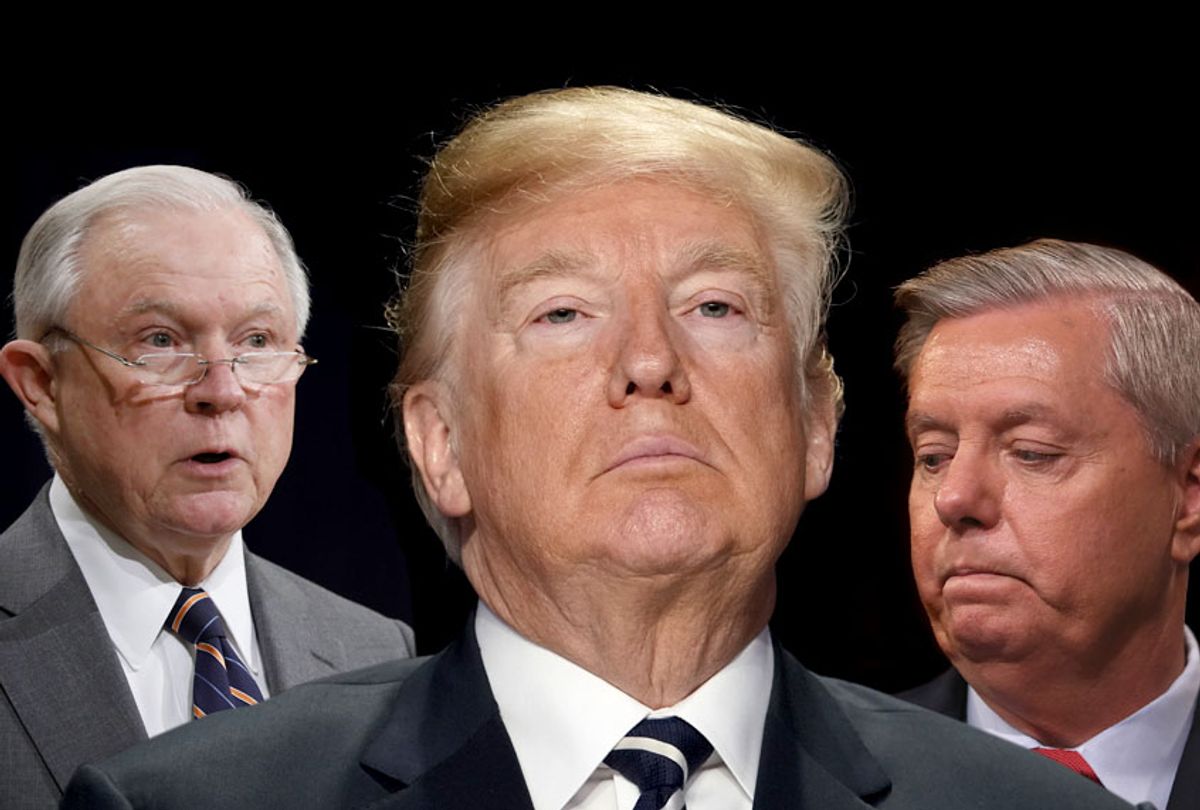 Senator Lindsey Graham (R-N.C.) predicted Monday that Attorney General Jeff Sessions would resign from his post and that a new attorney general would be leading the Justice Department by early next year.

"Jeff probably will step down," Graham told the conservative talk-radio host Hugh Hewitt, divining that "we'll have a new attorney general, most likely early next year."

Sessions has been publicly scorched by the president ever since he recused himself from special counsel Robert Mueller's ongoing investigation into allegations of collusion between Trump's 2016 presidential campaign and the Russian government. Trump has repeatedly insulted the nation's top law enforcement official and criticized his decision to recuse himself from the probe, even as Sessions has dramatically reshaped the Justice Department by implementing policies and initiatives that were cornerstones of the president's campaign, such as expanding religious liberty and cracking down on illegal immigration.

Trump previously declared, "I don't have an attorney general" and blasted Sessions' alleged inability to "control" the Justice Department as "regrettable." He has also reportedly blasted Sessions as "mentally retarded" and a "dumb Southerner."

Graham, who has wavered between criticizing the president's policies to cozying up to a commander-in-chief who occasionally invites him to golf outings at a Trump-branded resort, has previously spoken out in support of Trump's ability to remove Sessions from office, declaring that the pair's "relationship is beyond repair."

"The president's entitled to an attorney general he has faith in – somebody that's qualified for the job. And I think there will come a time – sooner rather than later – where it will be time to have a new face and a fresh voice at the Department of Justice," Graham previously stated. "That's an important office in the country. And, after the election, I think there will be some serious discussions about a new attorney general."

The South Carolina Republican's comments followed a Washington Post report that said "embattled officials, including Attorney General Jeff Sessions, are expected to be fired or actively pushed out by Trump after months of bitter recriminations."

"Allies of Sessions and some in the Justice Department believe the attorney general could be fired in humiliating fashion in the days immediately following Tuesday’s elections," the report read. "The White House has already begun considering replacements, while Trump aides and confidants have cautioned the president he would face a backlash if he fired either of the top two Justice officials, particularly before the midterms."

Graham, who has emerged as one of the president's greatest allies in the Senate, could play a pivotal role in replacing Sessions. Graham wants to become chairman of the Senate Judiciary Committee after the midterm election, if the current chairman, Senator Chuck Grassley (R-Iowa), grabs the gavel of the Finance Committee, according to the New York Times.

Graham, whose vehement defense of Supreme Court Justice Brett Kavanaugh amid allegations of sexual misconduct and harassment garnered widespread media attention, told Hewitt that the Democrats' "complete destruction" of Kavanaugh during his confirmation process would launch a major change for the Judiciary Committee.

Graham said that, while he would be happy to reach across liberal lines to work with Democrats on compromises on issues like immigration or prison reform, "when it comes to judges, enough is enough." He added that the committee would abolish its long-standing policy of allowing lawmakers to weigh in on judicial nominees from their home state by submitting a form called the "blue-slip" — a process he claimed "has been uneven in its application." Democrats would still be allowed input, he said, but "they're not going to have a veto on the circuit court."

If Republicans maintain a majority in the upper chamber after Nov. 6, Graham warned "we're going to be full throttle when it comes to judges."