Lost in the weeds: Marijuana goes missing from the midterm ballot 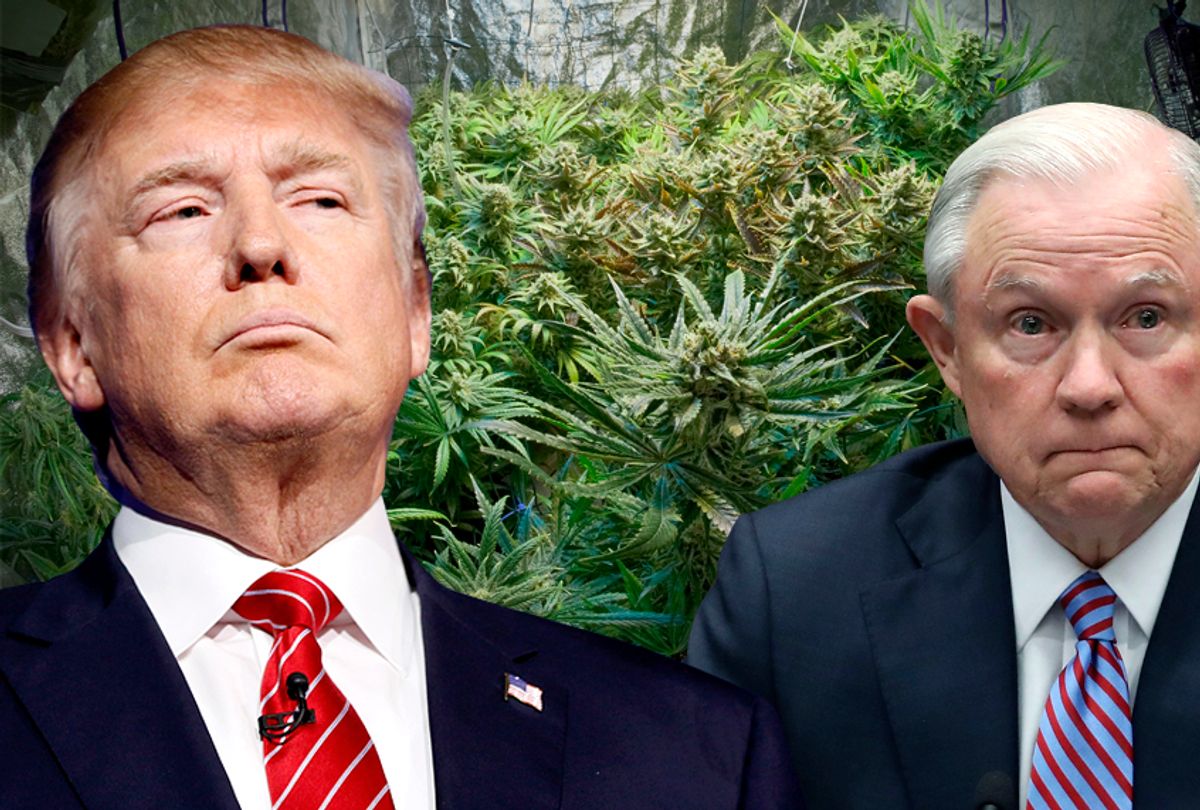 In the lead up to the 2018 midterm elections, cannabis advocates are going through a familiar routine: throwing their hands up in frustration as to why more candidates are not embracing cannabis reform. It’s an important question for the movement and one that, based on public opinion polling, suggests a disconnect between the public and their elected officials. However, new polling shines a light on why this disconnect happens and it all boils down to congressional primaries.

Public opinion around cannabis reform has changed dramatically over the past two decades. Support for medical cannabis hovers somewhere above 80 percent (sometimes well above that), and recent polling shows that two-thirds of Americans support adult-use cannabis reform. So, why hasn’t the D.C. establishment embraced such a popular issue? I have written elsewhere that there is a disconnect between support and salience. That is, while many people support cannabis reform, an overwhelming number of Americans just don’t care about it. Most Americans are not regular users, and most feel it is an issue that doesn’t affect them. Cannabis policy has never entered the top 20 issues Americans care most about according to Gallup. This means that Americans are unlikely to vote against a candidate based on that position, and that candidates are unlikely to stake out a position on it. We have seen that play out in election after election.

However, national polling misses an important facet of American politics and a major part of the calculus that elected officials use when forming issue positions. Increasingly — and especially in House races — candidates appeal to their primary electorate. In an era in which gerrymandering is a common tradition for both parties, there are a significant number of House races in which the primary is the race to watch and the general election is just a formality. Congressional primaries have embarrassingly low voter turnout, meaning tiny minority of voters are making the biggest decisions about who ultimately gets elected.

So, if candidates are running largely to appeal to a primary base of voters, it is important to understand what those voters believe on a host of issues. Unfortunately, we don’t have a good idea what the congressional primary electorate thinks about policy. Until now.

Over the past few election cycles, the Primaries Project at the Brookings Institution has been conducting some of the nation’s first ever exit polling of congressional primaries. We put exit polls into the field in some of the nation’s competitive congressional districts in 17 states—those districts in which interest and turnout would naturally be higher and where turnout would be somewhat more reflective of an electorate that turns out in November (relative to non-competitive districts). And this year, for the first time, we asked about cannabis reform. 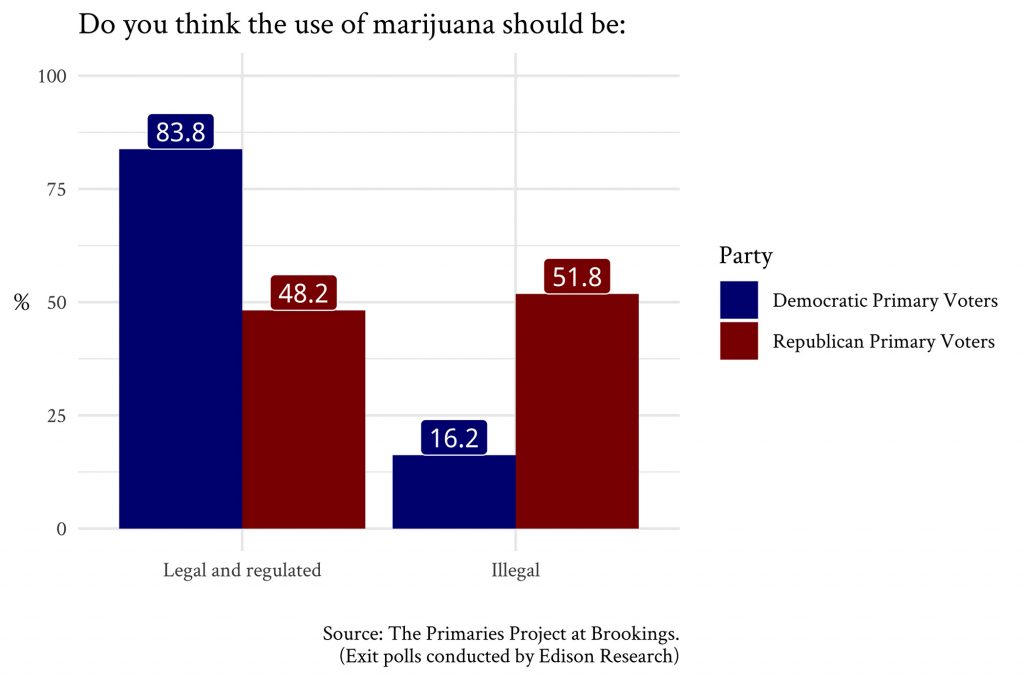 While some national polling has shown recently that Republicans are coming around on the issue of cannabis reform, even indicating a majority of Republicans nationally support reform, the primary electorate may be different. It is important to note that we did not poll in every Congressional primary. And from district to district, race to race, results could vary. However, in 20 of this year’s competitive primaries, cannabis reform is controversial for Republicans. Combining those poll results with an understanding that cannabis is not a salient issue, Republicans are unlikely to stake out a position on it. Why engage a controversial issue if you can simply avoid it?

The next chart illustrates that issue avoidance in action. In addition to conducting exit polling, Brookings’ Primaries Project also coded the websites of every candidate running for the U.S. House nationwide — whether they were serious candidates or not. If a candidate filed to run for office and maintained a campaign website, we collected data from that website. Candidates’ positions on cannabis was one such issue we coded for.

What we found was that, by and large, candidates remained silent on the issue — a reflection of a topic that is not salient among the public. Unsurprisingly, Democrats were much more likely to discuss it with over 20 percent of candidates saying that they supported legalization or decriminalization of cannabis. However, about 78 percent of Democratic primary candidates and over 93 percent of Republican primary candidates provided no information on their position on cannabis. 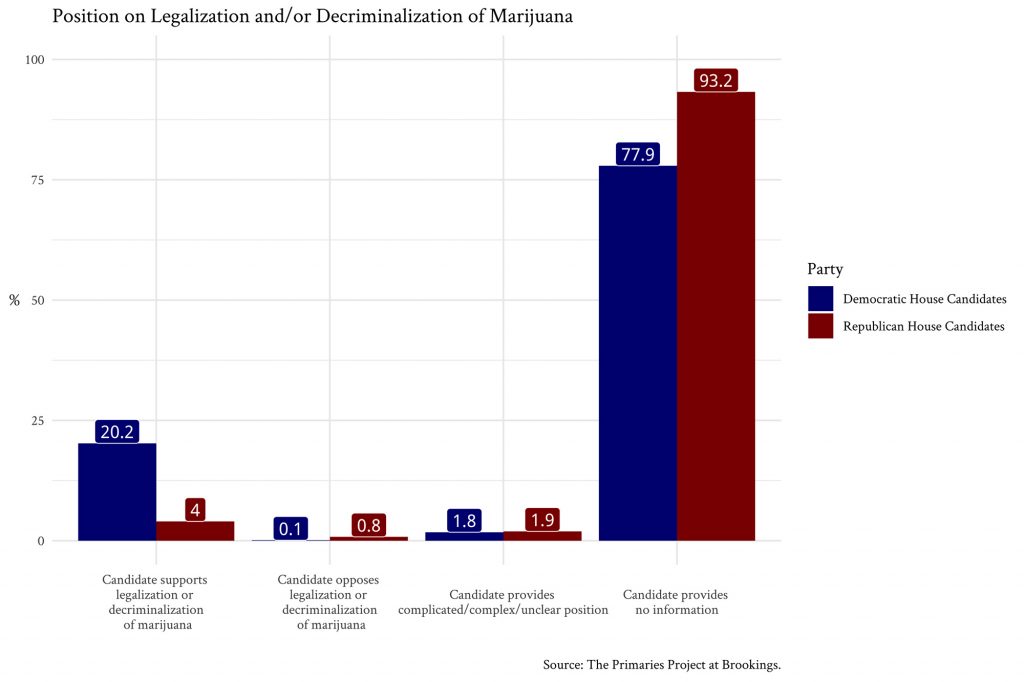 These data offer some important takeaways for cannabis reform in the context of Congressional elections. First, there is little reason Democrats are not staking out strong, pro-cannabis reform positions. In races in which candidates are appealing to the primary electorate, cannabis is a winning issue. (We also know from general polling that it’s a winning issue for Democrats among all of their party’s voters, too.) It is embarrassing that only 20 percent of Democratic House candidates endorse cannabis reform on their campaign website.

Second, it makes sense that Republicans avoid this issue and are not embracing cannabis reform. Our data suggest that in some of the nation’s competitive congressional primaries, cannabis reform remains deeply controversial. If those numbers are reflective of Republican congressional primary voters more generally, that controversy is something Republicans want to distance themselves from. And although voters and even debate commentators are asking candidates about cannabis reform more frequently than in the past, over 93 percent of Republican House candidates refuse to post a position on their campaign website.

Ultimately, while Americans may broadly believe in cannabis reform, and the issue seems like a no-brainer for candidates and elected officials, the realities of American politics suggest the issue is more complex. Among Republican primary voters who turn out to vote and for the voters who Republican congressional candidates pay the most attention to, cannabis remains a controversial issue and one in which they can get away with remaining silent about. The solution for motivating elected officials on the issue of cannabis is for the reform community to remain more engaged, hold candidates’ and elected officials’ feet to the fire, and actually turn out to vote—not just in November every four years, but in primaries and general elections every year. Right now, cannabis advocates’ votes don’t matter to most politicians, and the advocacy community needs to show candidates that it’s time to take cannabis policy seriously.