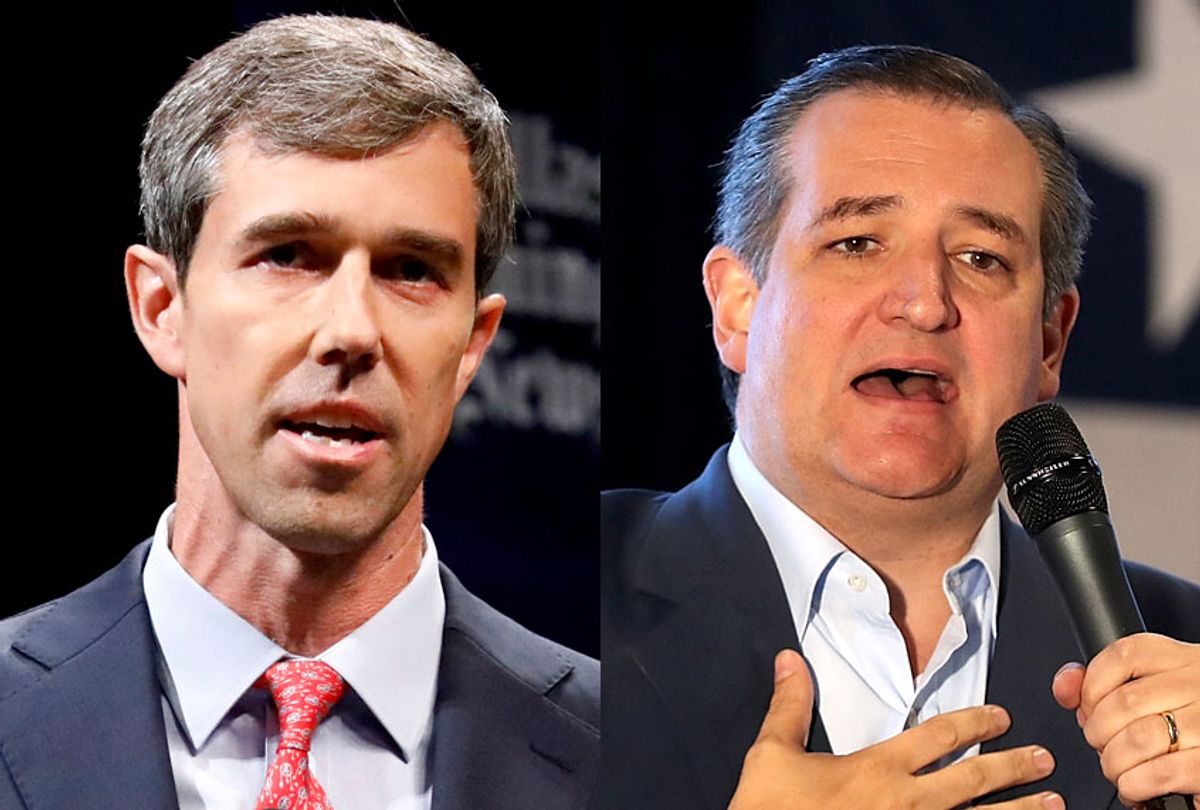 In one of the most-watched races of the year, progressive heartthrob Beto O'Rourke has fallen just short. Sen. Ted Cruz has been narrowly re-elected in Texas, according to the New York Times and numerous other sources.

O'Rourke led for much of the early vote count, leading many observers to believe he might pull off the upset of the night. But major media organizations called the race for Cruz around 11 p.m. Eastern time, as he held a lead of around 2.8 percent, or just over 200,000 votes.

It appears likely that O'Rourke's robust campaign has helped Texas Democrats in several congressional races. Rep. Pete Sessions, a Republican incumbent, has already lost his seat in the 32nd congressional district to Democrat Colin Allred, and Rep. John Culberson, another Republican, trails Democrat Lizzie Pannill Fletcher in the 7th district with most of the votes counted.

During his Senate campaign, O’Rourke became something of a pop-culture phenomenon, visiting all 254 Texas counties and often attracting large crowds. Polls generally showed Cruz ahead by varying margins, but early voting by Texans under 30 was up more than 500 percent compared to the 2014 midterms, which suggested that O’Rourke might outperform his poll numbers. brought to Texas Democrats.

Despite his defeat, O’Rourke may have changed Texas Democrats' perceptions, and may yet be a contender for higher office in the future. As Salon's Amanda Marcotte explained, Betomania was unprecedented:

I got back to Austin for a visit a couple of weeks ago, and it was clear that Betomania is no joke. The entire city seemed to be drenched in blue "Beto" signs, and conversations turned to his candidacy regularly and organically. True, Austin is a progressive city that always votes for Democrats, but it's rare to see this kind of on-the-ground enthusiasm for a statewide candidate, precisely because of the near certainty that they'll lose.

In recent decades, Texas has been a notoriously difficult environment for Democrats, partly because the demographics most likely to support them tend not to vote. As writers Alexa Ura and Ryan Murphy explained in the Texas Tribune earlier this year:

Hopes for a swell in voter turnout often hinge on the state’s burgeoning Hispanic population. But a breakdown of the population by age shows a third of Texas Hispanics aren’t even of voting age. In fact, those under 18 make up the state’s largest Hispanic age group. Meanwhile, those aged 45 to 64 make up the biggest age group of white Texans.

To be clear, Hispanic adults participate in elections at lower rates than their white and black counterparts overall, which makes them an easy target for voter mobilization efforts. But when it comes to convincing Hispanic voters to play a bigger role in elections, it doesn’t help that they’re already starting from behind.

On Monday, in his final plea, Cruz emulated his former nemesis Donald Trump by suggesting that the "hard left" had dark visions of the Texas future.

“It’s the time for choosing. It’s the time for action. We know that the hard-left right now, they’re angry. They’re energized,” Cruz said. “They’re filled with rage and hatred for the president. And that’s dangerous.”