Win or lose, Betomania has been a big victory for Texas progressives

Liberals in the state are sick of being told they aren't real Texans. Beto offers a chance to claim their identity 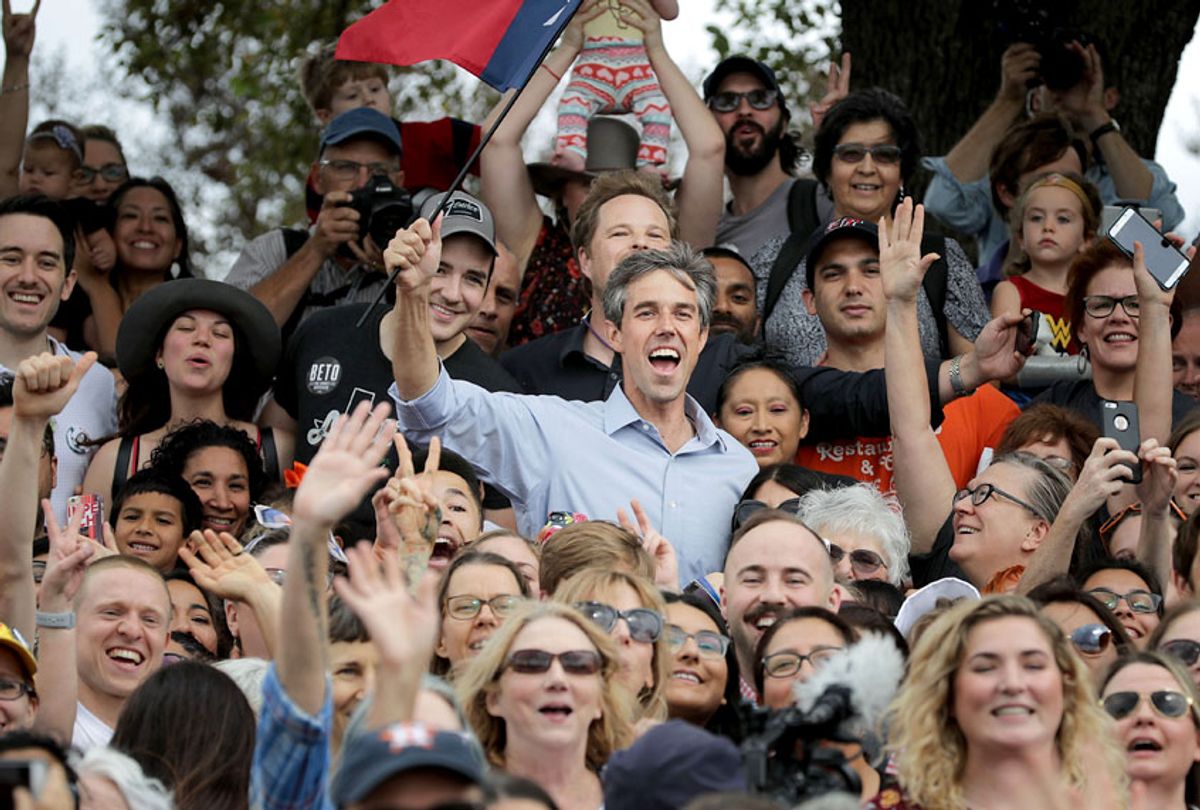 I've been a New York resident for nine years, and one of the many perks has been knowing that when I go to the polls to vote in statewide elections, my vote is not wasted. After spending most of my adult life dutifully voting for Democrats in statewide elections, while knowing my home state of Texas was going red anyway, it's been a genuine delight marking my ballot for Chuck Schumer, Kirsten Gillibrand and -- to a much lesser extent -- Andrew Cuomo with the knowledge that I'm actually contributing to a winning coalition. It was a novel feeling, this whole "winning" thing.

But for the first time since I've left the balmy Novembers of Texas for a place where you need to wear a coat to vote, I've been feeling twinges of envy for the friends that still live there, because they get to vote for Beto O'Rourke, the Democrat who is challenging the oily Ted Cruz to be Texas' junior senator.

No doubt a huge part of it is that O'Rourke couldn't be better made to appeal to someone just like me, and not just because he's also a punk music geek who is close to my age. He's also a native El Pasoan, and it's so exciting to see someone from my hometown make good that I will forgive him for being from the west side. Either way, he absolutely knows what Chico's Tacos are, and I love that and I will not feel bad for loving it.

There comes a time in every political junkie's life where you age to the point of seeing a candidate who looks and sounds exactly as if he or she could be your friend. For a lot of baby boomers, that was Bill Clinton. For me, it's O'Rourke, and it's just plain fun. I wish I weren't so far away when Betomania happened to Texas.

Or maybe, since he's a Gen X-er, we should call it Betopalooza.

To be perfectly honest, despite my personal enthusiasm for O'Rourke, I was still skeptical that this wasn't one of those situations that comes along every few years — the most recent being Wendy Davis' gubernatorial campaign — where Democrats from out of state get whipped up about a Texas candidate but progressives inside the state are generally limp, unable to emotionally invest when they know that beating the Republican is a pipe dream.

To be clear, the polling still isn't looking good for my man Beto, who has never been able to pull ahead of Cruz, despite the almost laughable gap between the two men on not just charisma, but simply the ability to sit next to a person on a plane without that person cringing inside.

Yet, still -- there are signs that Betomania is not just some nonsense invented by outsiders, and represents something very real and very organic in the state. When I interviewed Mary Beth Rogers, who was campaign manager for Ann Richards when she was the last Democratic governor of Texas, Rogers noted that even in suburban areas that typically lean Republican, a huge number of "Beto" signs were popping up in yards — something that would previously have seemed unimaginable. Part of that is that O'Rourke has invested heavily in campaign signage, a necessary move for someone who previously had little name recognition. But it's also because that O'Rourke's campaign is encouraging liberals that might otherwise be dispirited to be engaged and outspoken about their political leanings.

I got back to Austin for a visit a couple of weeks ago, and it was clear that Betomania is no joke. The entire city seemed to be drenched in blue "Beto" signs, and conversations turned to his candidacy regularly and organically. True, Austin is a progressive city that always votes for Democrats, but it's rare to see this kind of on-the-ground enthusiasm for a statewide candidate, precisely because of the near certainty that they'll lose.

This fervor seems like it might be showing up at the polls. Anecdotal evidence suggested that early voting in Texas has been abnormally high for a midterm election, and hard numbers backed that up after the early voting polls closed. Numbers were being driven up by high turnout in Texas cities, which tend to lean Democratic, and young voters were voting at twice the rate that they usually do in midterms.

It's hard to move from all that enthusiasm to the belief that O'Rourke has a real chance, though hope springs eternal. Having followed the election closely and watched the Beto fandom among my Texas friends, I think Betomania is about something more than the very long shot that he might actually win. It's about identity, and about who has claim to the identity of "Texan."

For a long time now, conservative white Texans have been aggressive about denying that their left-leaning counterparts — who tend to live in cities and are more racially diverse — have a right to consider themselves "Texan" at all. When I lived there, I often had Republican voters act like I was an interloper in the state where I was born in and had lived my whole life. Now that I live in New York, I frequently have the bizarre experience of dudes lecturing me on social media about how I don't understand a state where I literally spent the first 32 years of my life.

Ted Cruz has been running a campaign based on just that premise -- that liberals cannot be "real" Texans. One of his early campaign ads took the music to the Alabama song "If You're Gonna Play in Texas (You Gotta Have a Fiddle in the Band)" and changed the lyrics to suggest that no candidate who is a liberal can be legitimate in Texas. Repeatedly, Cruz's campaign has tried to frame O'Rourke — who was born in Texas, unlike Cruz, a native of Canada  — as somehow not belonging to the state, with ads mocking O'Rourke for his some of his youthful hijinks, such as drunk driving, being in a rock band and minor criminal trespassing.

The problem with that strategy is that playing music, getting drunk and getting into low-level trouble with the law isn't just normal for Texas youth, but practically mandatory. Highlighting these aspects of O'Rourke's youth only reinscribed his fundamental Texan identity for the public. And O'Rourke himself was able to double down on this, by having a well-publicized concert where Willie Nelson played and posting videos of himself driving down long Texas highways, in a fashion all too familiar to most residents. He's also been able to respond to Cruz's hyperventilating attacks with a laconic Texas cool that most of us from the state like to imagine we have.

In this way, Betomania has been a vehicle for millions of progressive Texans to push back against attempts to delegitimize their identity, and to assert they are just as Texan as any rural-dwelling redneck with an overly fancy pickup truck he paid way too much money for.  That's why, I suspect, they are putting up signs and lining up to vote, even as they know it likely won't result in a win. They'd like to win, of course, but what they really want to do is stand up for themselves and their right to be Texans. Even if Ted Cruz wins another term in the Senate, he won't be able to take that away from them.