Don't give up the fight: Post-election activism is self-care, too

Research shows taking action eases stress, keeps you from feeling alone in this fall-out, and make you happier 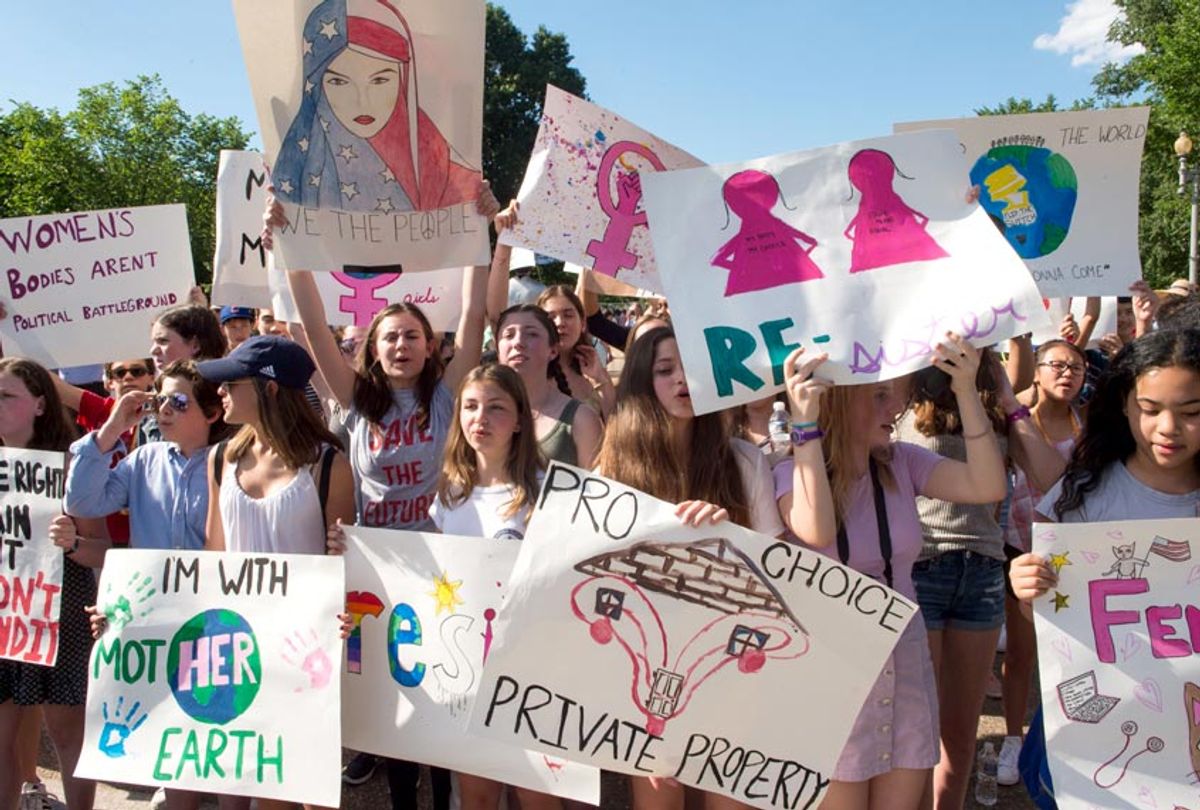 Protesters hold up signs during a demonstration in front of the White House objecting to Donald Trump's decision to withdraw from the Paris Climate accord, June 1, 2017. (Getty/Paul J. Richards)
--

The midterm elections' anticipated "blue wave" netted mixed results for liberals and progressives yesterday. Republicans expanded their Senate majority — and Texas did send Ted Cruz back to Washington for another term — but the House flipped to Democratic control, and now has more than 100 women holding congressional seats. In governor races, right wing crusader Kris Kobach lost his bid for Kansas, as did Scott Walker in Wisconsin, while in Florida, progressive breakout star Andrew Gillum was narrowly defeated by Ron DeSantis.

So yes, there is bad news among the good, but the fight isn’t over. The social changes Democrats ran on — both those who won and those who lost — are still worth fighting for, and quite truly the future of humanity depends on it. From climate change to mass animal extinction to wealth disparity and a disconcerting rise in violence, this planet is a disaster, and these issue are greater than just one election. The good news is we can change it, and we don’t need political leaders to do the work for us (although their support would help).

In order to cope with the disappointments that accompanied the victories, it is tempting to reach for the nearest alcoholic beverage, social media channel to vent, or workout class. While these can help in the moment, they're Band-Aids, and we all know those don’t heal big wounds; they just protect us from getting hurt again. The self-care movement, as well-intentioned as it is, often suggests that we engage in activities that keep us focused on the self. Yoga, meditation, baths all draw us more inward. Yes, this can be good for relaxation, but paradoxically it can also create more anxiety following a crisis. As Deepak Chopra once explained to me in an interview, “The moment you identify yourself as separate from other beings, or other people, or separate from life in general then you will suffer, and it all begins with initial anxiety because when you’re disconnected from people and life, you feel fear, and that creates the beginning of suffering.”

This is not the time to suffer alone. We are all in this together fighting fear and hatred. The most effective way to heal from centuries of civilizations built on toxic patriarchy, and to pave the way for a better future, is to get active, volunteer, and be of service to the marginalized communities who need the most support right now — not only to help them in a time where they are most vulnerable, but to help you heal from this political setback, too. Research shows taking action will ease your stress, keep you from feeling alone in this fall-out, and make you happier.

Ichiro Kawachi, Chair of the Department of Social and Behavioral Sciences at the Harvard T.H. Chan School of Public Health, once explained to me that the common phenomenon of how a community responds to external threats, such as a natural disaster, is referred to as “bounded solidarity” by sociologists. “It's a part of what we call the ‘social capital’ of communities—the social connections which help communities to recover via mutual assistance, such as happened after Hurricane Harvey,” he said. “Research suggests that these social connections are just as important—if not more—than the physical materials needed after a natural disaster, such as disaster kits or medical supplies.”

In other words, social capital — people coming together and helping each other — enables resilience. The same can be said for a crisis caused by political upheaval, too.

Undoubtedly, the Trump presidency sparked the inner activist in many Americans with liberal and progressive political views. As if it was a subconscious endeavor, many people instinctively knew the best way to cope with Trump’s presidency was to get involved and do something to counteract it. This was almost immediately obvious after the election. The donation page for the American Civil Liberties Union crashed because pageviews increased by 7,000 percent. Planned Parenthood received 300,000 donations in six weeks after the election; 40 times the organization’s normal rate. Seventy percent of those who donated had never contributed to the organization before. Tennessee Immigrant and Refugee Rights Coalition (TIRRC) and Conexión Americas experienced an unprecedented increase in volunteers. Prior to this election, many of these people believed American democracy was safe, and that their help wasn’t needed to protect it.

“During the 20 years I’ve worked at VolunteerMatch, the busiest time was the week after Trump was elected and that was completely unexpected for me,” Greg Baldwin, the president of VolunteerMatch,a nonprofit that matches a person with a desired volunteer opportunity, told me.

This year, a record-breaking number of women ran for office in the midterm elections — that was undoubtedly influenced by the last presidential election. The outcome from yesterday’s election may have been mixed for the Democrats, but while the Trump presidency has created a lot of chaos and heartache, it has also been the catalyst for incredible change and engagement. This is what I like to call the beauty in crisis: when something good stems out of something bad. The light is always there, and it can usually be found at the center of people coming together.

Lisa Luckett, who lost her husband in 9/11, once told me in an interview when she thinks about 9/11 she never wants to forget “the beauty and the grace and the compassion and the resiliency and the incredible strength of the human spirit that came afterward.”

Let the same be said about this dark period in American history. Perhaps the greatest change is that we aren’t a nation who only comes together, and helps others, in the wake of a crisis, but we are one that stays active and keeps fighting for future generations. So take your bath today and rest. Tomorrow, be ready to get back at it again.