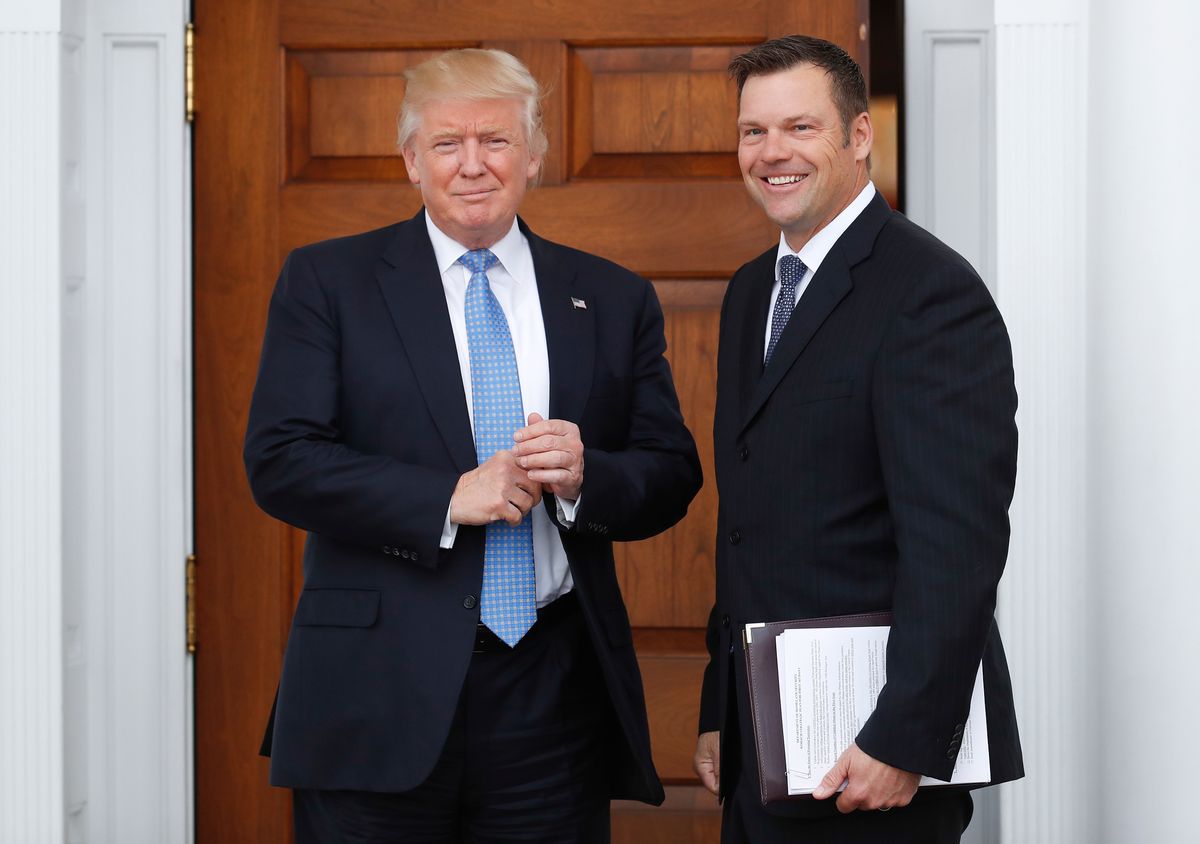 Kansas Secretary of State Kris Kobach, the right-wing activist and politician who has waged a tireless crusade to curtail immigration and voting rights in America, has lost a tight contest to be named the state's next governor. Kobach, who landed the endorsement of President Donald Trump, faced off against Democrat Laura Kelly in a state that the commander-in-chief carried by double digits.

Democrats had previously suggested that a face-off in November against the scandal-ridden Kobach could prove advantageous. In July, the Associated Press reported that "last spring, Trump was on the verge of tweeting out an endorsement of Kobach but his staff intervened, warning of the repercussions." The president's subsequent intervention later "delighted Democrats who [saw] an opening to make significant gains in a conservative-leaning states," the New York Times wrote.

Kobach, who was revealed to have redirected massive amounts of taxpayer dollars into his own pockets, is perhaps best known for writing the "show me your papers" law in Arizona that was struck down in federal court. He also headed Trump's now-defunct Presidential Advisory Commission on Election Integrity, which uncovered no evidence to support the administration’s claims of widespread voter fraud. The commission was disbanded after many states refused Kobach’s demand to hand over their confidential voter rolls to the federal government.

Kobach, who is a close ally of the president, was also fined for "misleading the court" in cases pertaining to restrictive voter ID laws in his state. Although Kobach has appealed the fine, U.S. District judge Julie Robinson rejected his voter restriction law and even called his credibility into question. Robinson also determined that Kobach’s conduct during the trial was so uninformed that he needed to take classes to learn about the law itself. Accordingly, she ordered him to complete six hours of legal education.

The defeated Republican candidate is also a paid Breitbart News columnist, where he has articulated his hardline anti-immigration views. "I think Breitbart.com appeals to anyone who is Republican or conservative in any way," Kobach told the Kansas City Star when asked about the site catering to white nationalist views. "It appeals to a broad spectrum of conservative readers."

According to the Star, four out of Kobach's seven published articles for Breitbart centered around immigration policy at the time of its interview with the secretary of state. His first column, published in June, was titled: "Refugees and Terrorism: A Massive Vulnerability in Our Immigration System."

In addition, Kobach once accidentally leaked Department of Homeland Security plans when posing for a press photograph with then president-elect Trump. Using photo editing tools, a zoomed-in view of the documents revealed a plan to put Trump's hard-line immigration platform into practice.

Kobach has even gone so far as to take credit for Trump’s plans to "make Mexico pay for the wall." Salon’s Amanda Marcotte previously reported that Kobach conceived a plan to hold hostage the money sent by legal immigrants to family members until Mexico caved in to fund the effort.

He also "served in the Bush administration and was instrumental in the implementation of the National Security Entry-Exit Registration System, the post 9/11 requirement that all Muslims and Middle Eastern citizens in the country on visas register and file their fingerprints with the government," Salon's Heather Digby Parton previously wrote.

The Fair Immigration Reform Movement, an immigrants’ rights advocacy group, has previously condemned Kobach's candidacy, arguing that he "is an Architect of Hate and he’s relied on hate and fear to financially profit as he advanced and defended policies aimed at severely restricting immigration in the United States."

Kobach also served as an adviser on immigration to Mitt Romney's 2012 presidential campaign and has advocated for "self-deportation," but said he does not want "to do it at gun point" in a 2012 interview with Salon. Undocumented residents, he said, "should go home on their own volition, under their own will, pick their own day, get their things in order and leave. That’s a more humane way."

"If we had a true nationwide policy of self-deportation, I believe we would see our illegal alien population cut in half at a minimum very quickly," Kobach said at the time.

Jay Inslee (D-WA), the chair of the Democratic Governors Association, applauded Kelly's victory in Kansas' gubernatorial race — a major pick up for the party.

"Congratulations to Governor-Elect Laura Kelly on her inspiring and well-deserved victory in Kansas," Inslee said in a statement. "Kansans are getting a proven leader with a long bipartisan record who will work to strengthen Kansas schools and expand access to health care for the state’s working families."